The all new OnePlus 6T is now official and although it doesn’t pack in a whole lot of changes as far as the hardware is concerned, it does feature some neat software updates to improve the existing hardware.

In our review of the OnePlus 6T, we already pointed out how the phone has the same camera hardware as the OnePlus 6, but OnePlus claims that the camera performance should be much better because of improvements in the image processing algorithms in the new software.

Well, we wouldn’t expect you to believe the company’s word at face value which is why we’re here to test out the OnePlus 6T’s camera performance and help you figure out if the software improvements make any difference at all. So, without further ado, lets jump into it:

Many of you might already be familiar with OnePlus 6 camera, and by extension the OnePlus 6T, but for those of you who aren’t lets get the hardware specifications out of the way before seeing the samples and comparison.

The OnePlus 6T’s dual camera setup on the back packs in a 16MP f/1.7 sensor coupled with a 20MP f/1.7 sensor which aids the primary sensor with depth perception. The rear camera setup is stabilized by both OIS and EIS, which should mean stable videos, and better zoom performance. 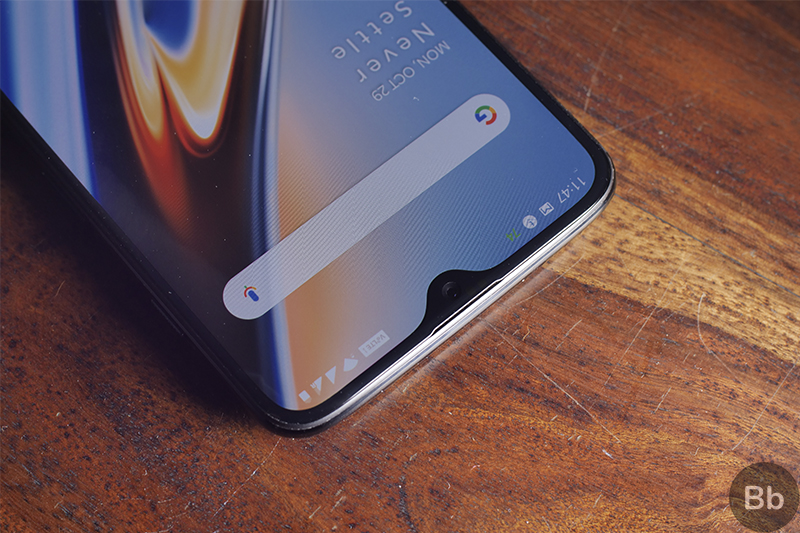 Up front, the device’s waterdrop style notch houses a single 16MP f/2.0 selfie shooter which, should perform quite well. The sensor also supports EIS, which should result in pretty stable video from the front facing camera as well. Now that we’ve laid out the hardware specifications for you, lets see how exactly the camera performs:

So OnePlus claims that this time around it’s using a new algorithm which is capable of automatically adjusting settings in both the front and rear cameras to capture better images of commonly photographed scenes and objects. In my testing, the results were mixed.

When given enough light to work with, OnePlus 6T is capable of taking some great shots with a good amount of detail, great color reproduction and decent dynamic range. However, the performance is very inconsistent. While at times it is able to capture images with a stunning amount of detail, the next image in the same lighting conditions might not turn out as brilliant. Just take a look at these camera samples and see for yourself:

The shortcoming really become noticeable when working in low light. The inconsistency increases by a magnitude and the results in the same lighting vary quite a bit. At times the OnePlus 6T manages to capture enough light and details, but in other shots it fails to reproduce this. It even has a hard time focusing on the subject correctly in low-light scenarios which is definitely a bummer. Here are a few low-light shots we captured:

OnePlus has introduced a new night mode feature called Nightscape for the OnePlus 6T, which is also now available for the OnePlus 6. However, unlike the Night Sight feature coming to the Pixel 3, Nightscape isn’t all that great. We tried Nightscape under various low-light conditions, indoors and outdoors, I just managed to click a couple of half decent shots. OnePlus even pushed a pre-release update with improvements for the Nightscape feature, but that didn’t make any noticeable difference.

In my experience, if the background in the frame had even a hint of light, the camera would instantly focus there, and not on the subject in the foreground, even after tap-to-focus. I do hope OnePlus manages to fix Nightscape over time, because right now it’s just too inconsistent for it to be of any good use. We can see the potential but it’s not quite perfect just yet. Here are a couple of decent shots I managed to capture using the feature:

OnePlus also claims that it has made improvements to the portrait in the OnePlus 6T, adding contour lighting effect to improve lighting in portrait shots. In my testing though, the portrait mode images were also a mixed bag.

The 6T manages to capture some images that look really great and with good subject separation, but it also faltered as many times, delivering images that looked rather soft. The edge detection was better than the OnePlus 6, in my experience, but I wasn’t really satisfied because of the inconsistency. Here are some sample portrait shots:

In terms of video capture, the OnePlus 6T comes with support for 4K@60fps recording and thanks to the dual stabilization the videos looked pretty great. Despite those advantages, the resulting videos looked a bit wobbly. Same was the case with 1080p video captured at 60fps. It’s definitely usable, but we expected better from the dual stabilization. Here are some sample videos:

The 16MP selfie shooter on the OnePlus 6T takes some really great shots in both good and low-light conditions. The images have a good detail, decent dynamic range and accurate color reproduction – perfect for social media use. The front facing camera also comes with a software enabled portrait mode feature which manages decent portrait selfies. While the subject separation isn’t as good as that of the rear cameras, the images are totally usable for social media. Just take a look at these sample shots:

When it comes to pricing comparison, the OnePlus 6T has not rivals in this price range that can put up a decent fight. So we were forced to compared it with the older OnePlus 6, the Pixel 2 XL (which is hovering around this price mark right now), and the Xiaomi Poco F1 since it offers the best value for money in this performance segment with the same Snapdragon 845 SoC.

As you’d expect, the Pixel 2 XL easily beats the other devices when it comes to the camera performance. The OnePlus 6 and the OnePlus 6T go neck and neck, with the older phone managing to click better images in some situations. The Poco F1, unsurprisingly, takes the last spot but it still manages to deliver some decent images, which is quite commendable for a device at its price.

Lets kick off the comparison with some sample images clicked in good natural light:

As you can probably tell, the Pixel 2 XL delivers the best images out of the lot. Its images have great color accuracy, a stunning amount of detail and good dynamic range each and every time. The OnePlus duo capture decent shots, but both the device tend to turn up the saturation quite a bit so the colors don’t look all that natural. Once again, the OnePlus 6T’s inconsistent performance results in a few poorer images when compared to the OnePlus 6.

Next up, lets take a look at some low light shots captured by the four devices, outdoors and indoors:

Again, the Pixel 2 XL shines in the low light test, delivering exceptional images with little to no noise. Both the OnePlus 6T and the OnePlus 6 perform inconsistently in low light. The low light images clicked by the Poco F1 are consistent, but the results are not great, which is why it takes the last spot.

Now lets take a look at some portrait mode shots captured by the device:

Finally, lets focus on the capabilities of the front facing camera on these devices:

All the four devices manage to click some decent selfies, with the Pixel 2 XL, unsurprisingly, delivering the best results. The OnePlus 6 and the OnePlus 6T have similar results, but I kinda prefer the OnePlus 6T here. The Poco F1’s selfie shooter isn’t able to match the other three and comes in last, yet again.

In conclusion, I’d like to say that the OnePlus 6T’s camera performance isn’t a whole lot better than that of the OnePlus 6. Sure, OnePlus has included some software improvements but they don’t really work all that well and the camera is quite inconsistent. When it comes to the camera, the OnePlus 6T nothing but a minor improvement. So, if camera prowess is a priority for you, you should probably look at the Pixel 2 or the Pixel 2 XL in this price range. However, if you’re okay with just decent images and want a device that performs exceptionally well, then you should definitely consider buying the OnePlus 6T.