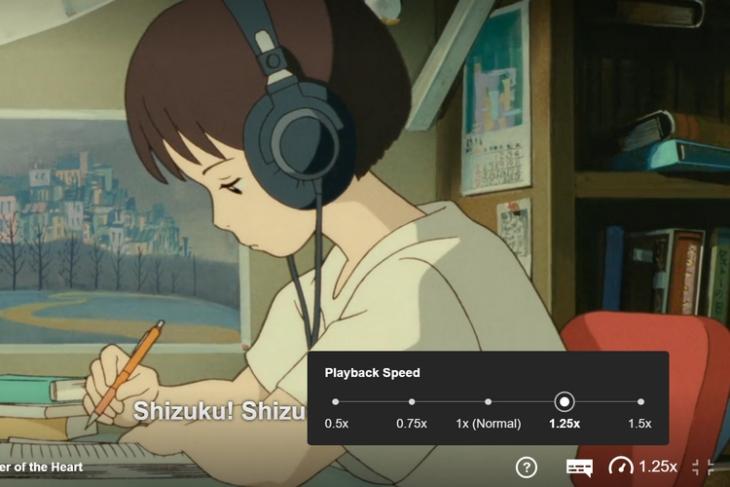 Much like its mobile counterpart, you can choose a playback speed ranging from 0.5x to 1.5x. The feature is present as a speedometer icon to the bottom right corner of the player interface that appears when you play a movie or TV show. When you click on the speedometer icon, you will see the option to set the playback speed to 0.5x, 0.75x, 1x, 1.25x, or 1.5x.

Playback speed control appears by default on Netflix for the web. In other words, you don’t have to go through the hassle of diving deep into settings for enabling the feature. The subtitle also syncs perfectly with the playback speed of your choice and that’s great news.

While I don’t like watching movies or TV shows at an increased pace unlike YouTube videos, this new option should come in handy for those who prefer to consume media in a fast-paced fashion. For what it’s worth, I might consider using this for skipping songs instead of making the effort to manually seek and skip.

Another feature in the works is an audio-only mode on mobile. The feature, first spotted by XDA in an APK teardown last month, is now in beta testing on Android. As spotted by Anmol from our team, the option is available in the latest Netflix version 7.83.0 build 25 25223 (beta).

With audio-only mode, you can continue listening to a movie or series in the background while you’re using other apps or when your screen is locked. Once widely available, you will see the controls to toggle audio-only mode in the player interface.

Moreover, you can choose when the audio-only mode should kick in. From Netflix’s app settings, you can either set the feature to always on or only when you’re connected to headphones/external speakers. There’s also an option to turn off audio-only mode if you’re not a huge fan of the feature.

While playback speed controls is widely rolling out on the web, audio-mode is available just for beta testers at this moment. We could expect the company to expand the test or availability of audio-only mode in the future, so stay tuned for updates.