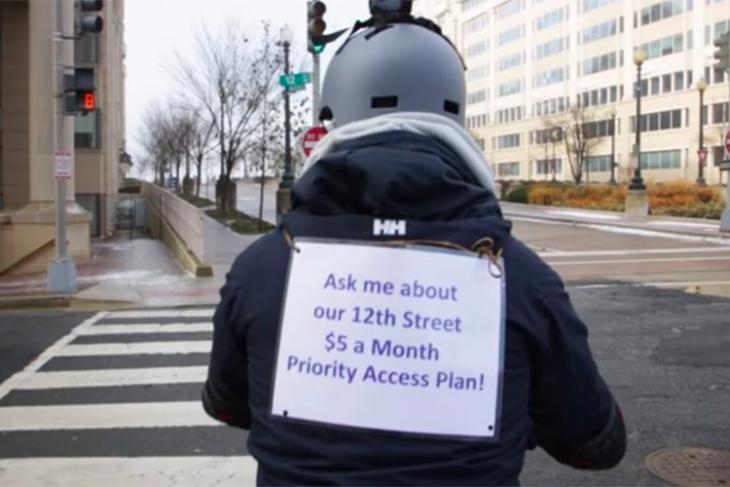 Recently, the FCC, led by its chairman Ajit Pai repealed net neutrality in the United States, leaving ISPs free to decide how to divide up the bandwidth they offer to customers and to create what are essentially ‘fast lanes’ and ‘slow lanes’ according to their own will.

While the rest of us took to Facebook, Twitter, and other social media, expressing our frustration at the FCC, one guy decided to give the FCC a taste of its own medicine.

Rob Bliss, a humanitarian and an activist took it upon himself to bring the FCC’s version of internet freedom to the streets of the nation. So he set out with a plan. Bliss bought a few traffic cones, mounted a couple of cameras on his helmet, and set out to block one lane of traffic in front of the FCC building. Naturally, slow-moving traffic isn’t what people like, but that’s what they get with Road Neutrality having been killed off.

Bliss’s master plan was very clever. People who wanted to use the fast lane on the road could get a special pass for $5, allowing them the use of the fast lanes, the rest of the people could stick with their free plans, and use the slow lane. Freedom to choose, after all, can only be offered if there are choices. If all the lanes are free (like they were before Bliss came along to help things), no one gets to choose the best lane for themselves.

Obviously, the cops showed up. Bliss, however, says that the cops were very understanding of his non-violent protest against repealing net neutrality, but alas, after a few days, they told him he had to get off the street.

So, Bliss couldn’t bring freedom to the roads of the United States, but he got across his point. If we’re not ready to accept fast lanes and slow lanes for our roads, we definitely shouldn’t have them for the internet.

You can watch his video (which is honestly a fun watch) over here: