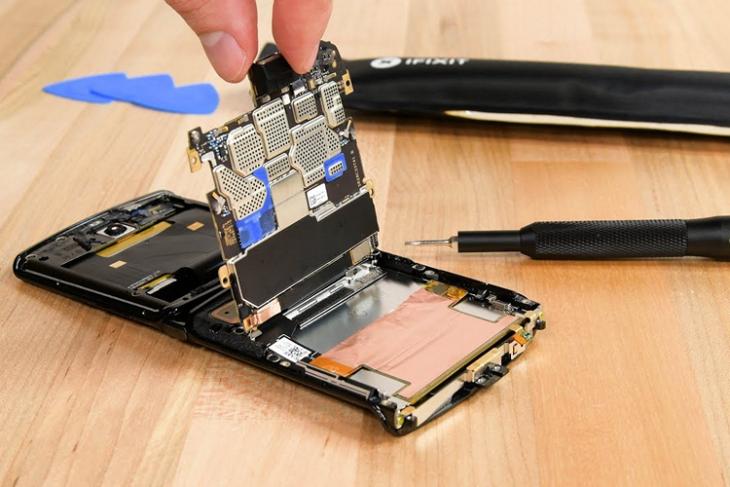 Motorola launched the Moto Razr foldable earlier this month in the US. We saw durability issues on display units of Razr showcased at stores last week and now, iFixit’s teardown proves that the foldable phone is practically unrepairable.

iFixit rates the handset 1/10 (10 being the easiest to repair). It criticizes the complex construction and multiple flex cables for making the repair process difficult. In fact, iFixit calls Moto Razr the “most complicated phone-based contraption” they’ve ever taken apart.

One of the major issues with Moto Razr in terms of repairability, according to iFixit, will have to be battery replacement. iFixit mentions that replacing the battery requires a “near-total disassembly.” The teardown also points out that the Type-C charging port has been soldered directly to the mainboard.

As we saw in JerryRigEverything’s durability test, the Moto Razr’s display is prone to attract dust particles and lint. Once minute particles get behind the handset’s display, it is likely to cause damage to the handset sooner rather than later. iFixit says that the primary display of the Razr is replaceable, only if you’re determined.

On the positive side of things, iFixit states that all you need is a standard T3 Torx driver to get inside the device. You can check out the teardown for yourself:

With all of these issues and the recent launch of the Galaxy Z Flip, the future of Motorola Razr is hanging by a thread. People now have the option to pick a better foldable phone over a nostalgic resurrection that seems to have wrong. Also, the Moto Razr is priced at $1,499, making it costlier than Galaxy Z Flip which retails at $1,380 in the US. Both the foldables are expected to make their way to India soon. So, which one would you pick? Share your thoughts in the comments below.

Moto Razr 2019 With Folding Display May Launch for €1,500 in Europe This Fall