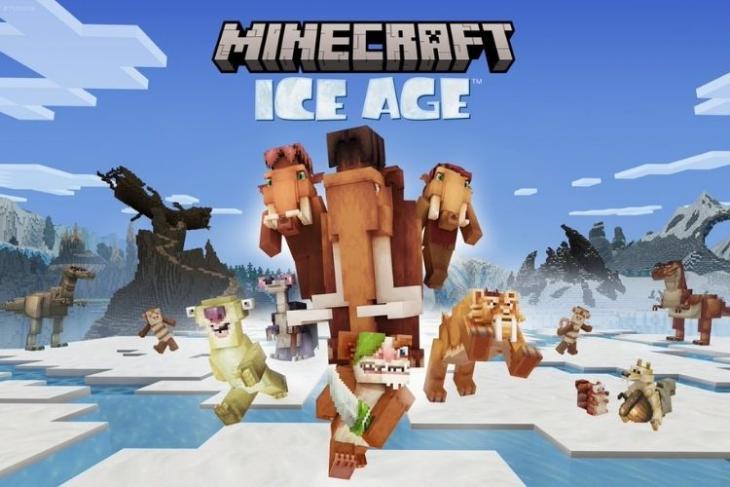 There is no doubt that the terrain generation of the Minecraft 1.18 Caves & Cliffs Part 2 update has made snow mountains more interesting. But they still lack many unique mobs, exclusive structures, or any storyline to explore. Fortunately, Minecraft is trying to fix all of that with the unique collaboration with the Ice Age franchise. We have got a Minecraft x Ice Age DLC with new structures, biomes, mobs, skins, and a lot more. But all of it is only free for a limited time. So, let’s not waste a moment and see what you can expect from the Minecraft x Ice Age DLC.

Developed by 4J Studios, the Minecraft x Ice Age DLC is exclusive to the Minecraft Bedrock Edition. It replaces the entire overworld of the game with the frozen world of Ice Age movies. While doing so, it also adds some iconic locations from the movies to the game. These include mountain caves, frozen peaks, and even ice roads alongside other structures.

In terms of characters, this DLC brings over 30 character skins that feature most of the iconic characters from Ice Age. These include Sid, Scrat, Manfred, Diego, and even Baby Moeritherium among others. Because of the creative freedom that the game provides, you can use these skins to create your own roleplay and stories. Or you can play the various mini-games that the DLC includes.

Get the DLC from Minecraft Marketplace

The Ice Age x Minecraft DLC is available on the Minecraft Marketplace for only 1340 Minecoins, which converts to roughly USD$ 8 at the current exchange rate. It is worth noting that this DLC’s price is the same as the last month’s Angry Birds X Minecraft DLC. So, if you are not an Ice Age fan, you can get the Angry Birds DLC instead.

Not to forget, if you get the Ice Age DLC before July 31st, 2022, you can also claim a free character creator item in your dressing room. Having said that, what other collaborations do you want to see in Minecraft? Tell us in the comments!