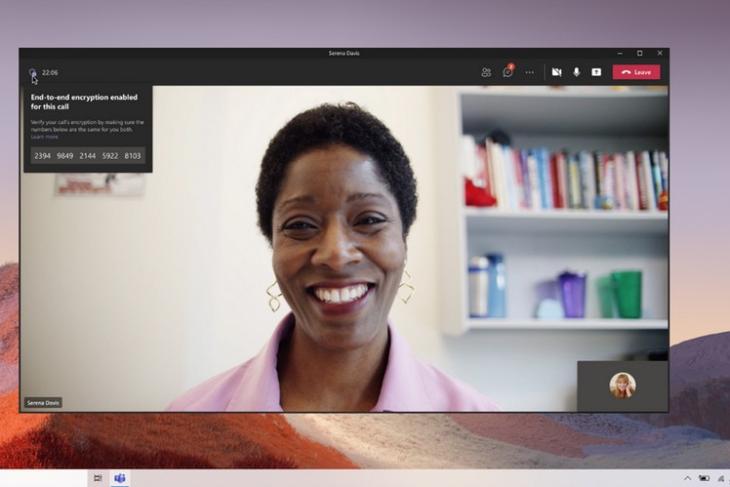 As people started relying more on video conferencing platforms during the Coronavirus-led pandemic, various companies started adding new features to their video conferencing apps to make them more competitive in the market. Amongst others, Microsoft announced to add end-to-end encryption (E2EE) to its popular video calling app Teams to make it on par with the competition earlier this year. And now, the Redmond giant has started rolling out the feature to all Microsoft Teams users.

So, if you are a Microsoft Teams user, you can now make one-to-one calls with the confidence that they would be secured via end-to-end encryption. That means VOIP calls on the platform would now be encrypted and sensitive conversations between users would be secured and cannot be easily decrypted by third-party apps or services.

Microsoft announced to add E2EE to Teams during its Ignite 2021 virtual conference in March this year. Following the announcement, the company started testing the feature in public previews from October until recently. Now, it has published an official blog post to announce the general rollout of E2EE for one-to-one calls on Microsoft Teams.

The company said that multiple enterprise customers in the US and Europe are currently in the process of rolling out E2EE for Teams calls. Once the IT admins configure the policy and enable it for users, they will be able to turn on the option from their Teams settings. However, IT admins retain the ability to disable the option for one-to-one calls on Teams if deemed necessary.

Now, although end-to-end encryption works for all one-to-one calls on Teams, users will be unable to access certain features on calls while E2EE is turned on. These include call recording, live captioning and transcriptions, call transfer, park, merge, adding participants to turn one-to-one calls into group calls, and call companion and transfer to another device. To use these features, users would be required to turn off the E2EE option from Microsoft Teams settings.

With that in mind, if you are a Microsoft Teams user, you can update your app to the latest version on your Windows or Mac device to gain E2EE calling support on the platform.

How to Enable Noise Cancellation on Microsoft Teams