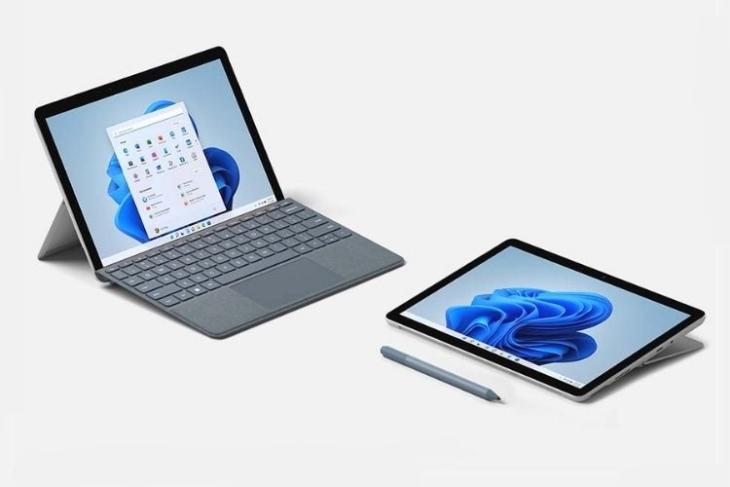 The Surface Go 3 looks similar to Surface Go 2 and is meant to ensure portability. The device supports three modes: laptop, tablet, and stand, depending upon the type of usage you have. For this, the device gets support for a Type Cover, which also has a kickstand variant.

As for the technical specifications, the Surface Go 3 is claimed to be 60% faster than its predecessor. It is powered by up to 10th-Gen Intel Core i3 processor with Intel UHD Graphics 615. There’s an Intel Pentium Gold 6500Y processor variant too. Both options come with up to 8GB of LPDDR3 RAM, along with 64GB of eMMC and 128GB of SSD storage options.

The Surface Go 3 features a 10.5-inch PixelSense touch display with a screen resolution of 1920 x 1080 pixels and an aspect ratio of 3:2. As mentioned above, there’s support for an 8MP rear camera and a 5MP front snapper here. It comes with a claimed battery life of around 11 hours.

Apart from this, there’s something on the software front too. The laptop comes installed with Windows 11 Home in S mode, Microsoft 365 Family (one month trial), 1 month trial of Xbox Game Pass Ultimate, and a suite of pre-loaded Microsoft apps. The list includes Microsoft 365, Teams, Edge, and more. Additionally, it gets Enterprise-grade protection with Windows Hello face sign-in. If you are unfamiliar with Microsoft’s latest desktop OS, you can check out the best Windows 11 features via the linked article.

Surface Go 3 is currently up for pre-orders and will be available to buy from Amazon India, starting November 23. Commercial SKUs can be bought via authorized resellers in December. Those looking to pre-book the laptop can get the Surface Pen (worth Rs 9,699) as a complimentary gift.