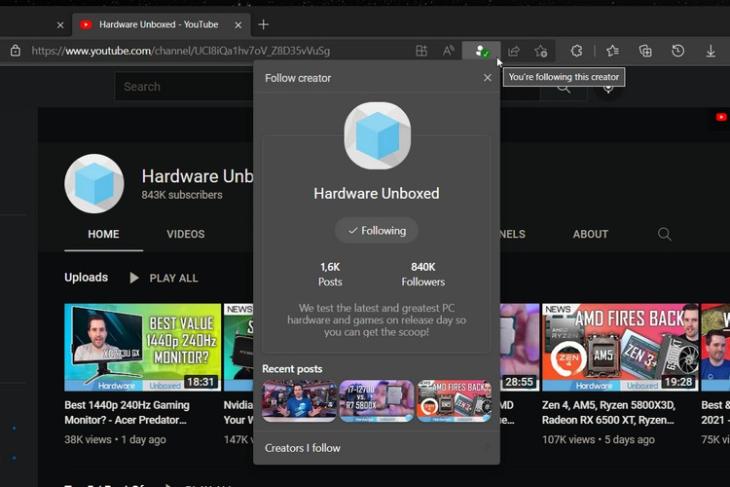 Microsoft has started testing a new “Followable Web” feature for its Chromium-based Microsoft Edge web browser. The feature is being tested on the latest Edge Canary build and lets users create a personalized feed, containing content from their favorite YouTube creators. Here’s everything you need to know about this nifty new feature.

The Followable Web feature allows users to follow their favorite content creators on YouTube with a simple tap. A new “Follow creator” button will pop up on Edge’s address bar whenever users are on certain followable channels on YouTube. This will create a personalized feed in Edge’s Collections section. This is like Google Chrome’s experimental feature introduced last year that follows a similar narrative.

It was initially spotted by Redditor u/Leopeva64-2 a few months ago in Edge but Microsoft disabled it shortly after. Now, the company has started testing it once again. For those who don’t know, there was no way to follow a creator before, as the “Follow” button was unavailable at the time of its initial availability.

Currently, the feature only works on YouTube and is limited to some content creators. Once users add their favorite content creators to the list, they would be able to view the latest videos from the creators they follow in a single place. Users can also unfollow a creator at any time from the “Following” section in the Collections menu. Microsoft Edge is expected to expand support for this feature to other social platforms like Facebook and Twitter.

For those who don’t know, Microsoft was also found testing a new inbuilt Games panel in Edge for users to play various kinds of games without the need for downloading them.

It remains to be seen when these features will be made available for the general users. We expect the company to iron out the bugs before rolling out the feature to the public. We will keep you updated and share more information on the same whenever they surface. So, stay tuned for further updates.