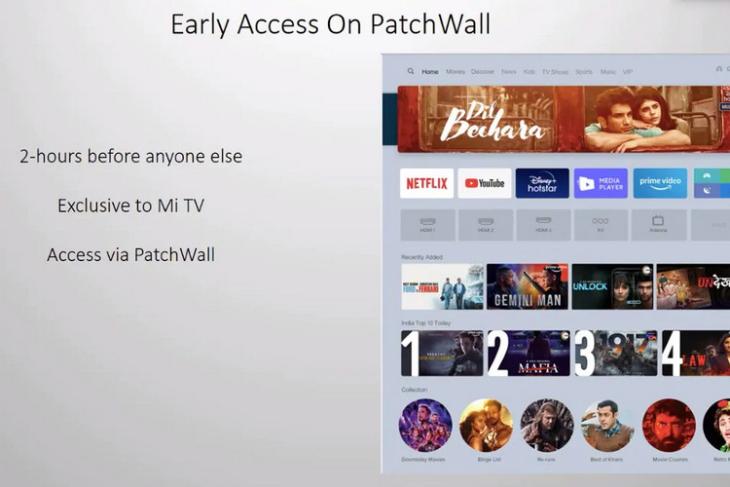 Xiaomi has announced a partnership with Disney+ Hotstar that will allow Mi TV users early access to select movies on the OTT platform. To start off, Xiaomi TV customers will get priority access to six titles under Disney+ Hotstar’s ‘Multiplex’ banner. The movies include Lootcase, Laxmmi Bomb, Bhuj: The Pride of India, Sadak 2, etc. They will be accissible via the PatchWall interface. Currently, there’s no clarity on whether more titles will be added to the list going forward.

Meanwhile, Lootcase, the first title launched following the tie-up, will officially release on Disney+ Hotstar at 7:30PM tonight. However MI TV users will be able to stream it from 5:30PM – a full two hours before its general release. The two companies have also worked together to enable one-click play, sports page and universal search on PatchWall.

Speaking to NDTV, Mi TV Category Lead in India, Eshwar Nilakantan, said the partnership will offer viewers a ‘first-day, first-show’-type movie theater experience at home. He, however, didn’t confirm that the offerings will continue beyond the pandemic. “For the future, we will have to look at how the whole thing pans out and we’ll take a call on a case-to-case basis”, he said.

Disney+ Hotstar announced its ‘Multiplex’ feature late last month. As part of the plan, seven Bollywood movies, originally meant to release in theaters, will now be releasing on the platform because of COVID-19. The list includes ‘Dil Bechara’, starring the late Sushant Singh Rajput.