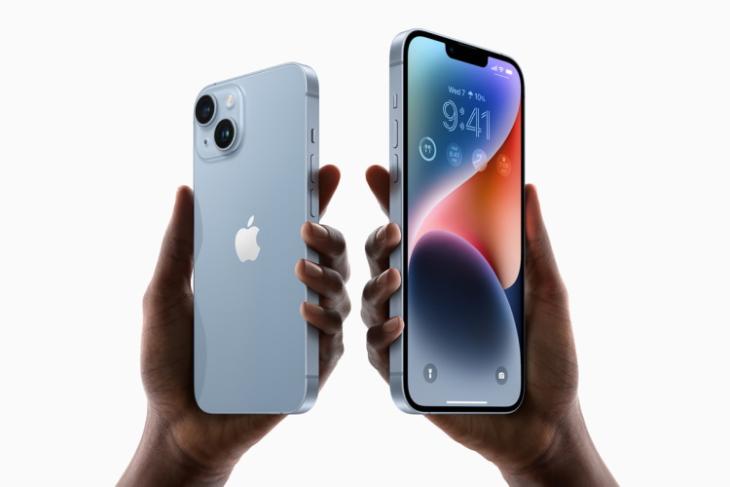 At the ‘Far Out’ hardware launch event, Apple also unveiled the iPhone 14 and the iPhone 14 Plus, alongside the iPhone 14 Pro lineup. And yeah, the rumors have proven true, the company has ditched the ‘mini’ iPhone in favor of a bigger ‘Plus’ variant this year. Moreover, Apple also revealed how it’s differentiating the standard and Pro models, bringing only minor upgrades to the iPhone 14 and 14 Plus. Having said that, let’s look at the upgrades and features of the new iPhone 14 models.

iPhone 14 and iPhone 14 Plus Launched

First up, you can clearly see that the design of the iPhone 14 and 14 Plus remains unchanged in comparison to the previous-gen iPhone 13 series. Both models support the smaller notch that was introduced last year and dual cameras on the rear. The only difference, as revealed above, is that you get the non-Pro iPhone 14 models in 6.1-inch and 6.7-inch screen sizes. The 5.4-inch mini variant no longer exists.

The Super Retina XDR displays here are OLED panels that support up to 1200 nits of peak HDR brightness, a 2,000,000:1 contrast ratio, and Dolby Vision. Also, the panels here are protected by Apple’s Ceramic Shield. As for the cameras, you get an updated 12MP primary camera (now with sensor-shift OIS support) and a 12MP ultra-wide camera. There’s also a 12MP TrueDepth camera in the notch on the front.

It’s not just the design that remains the same in this year’s non-Pro iPhone 14 models. Apple has also decided to not include its latest A16 Bionic chipset under the hood here. In line with rumors, the iPhone 14 and iPhone 14 Plus are powered by the A15 Bionic chipset, which powers last year’s iPhone 13 series.

Wondering if it brings any improvements? Well, instead of using the same A15 chip as last year’s non-Pro models, iPhone 14 includes the slightly more powerful A15 Bionic chipset with a 5-core GPU found in iPhone 13 Pro models. And like always, Apple did not disclose the RAM and battery details of the new iPhone 14 models. The storage variants, on the other hand, start at 128GB for the base model and go up to 512GB.

Finally, the iPhone 14 and 14 Plus will be one of the first devices to run iOS 16 out of the box. Also, they now include new features such as Crash Detection and Emergency SOS via Satellite. The latter, as per Apple’s blog post, “combines custom components deeply integrated with software to allow antennas to connect directly to a satellite, enabling messaging with emergency services when outside of cellular or Wi-Fi coverage.” The Emergency SOS feature will become available to users in US and Canada in November.