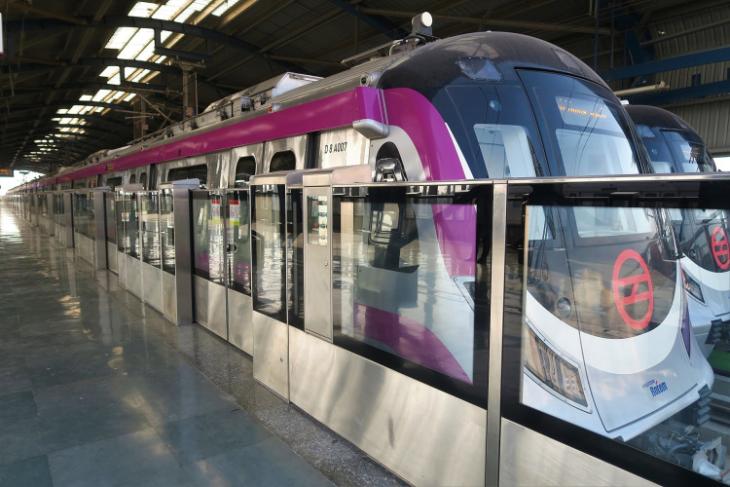 India is taking an important step towards automation today. After grueling tests over the past couple of years, Prime Minister Narendra Modi has flagged off India’s first-ever driverless metro train operations in Delhi today. The driverless metro will operate on the Magenta Line of the Delhi Metro, which was inaugurated back in 2017. This metro line stretches over 37-km and it connects Janakpuri West to Botanical Garden.

The driverless metro train on the Magenta Line is fully-automated. This means it will run independently (with close monitoring), on time, and eliminate the possibility of human error. This means your metro train on the Magenta Line will not have a driver, starting today. This will ‘herald a new era of traveling comfort and enhanced mobility,’ as per the government’s official press note. Also, it showcases “how fast the country is moving towards smart systems,” said PM Modi at the virtual inauguration of the driverless metro technology.

This technology sees DMRC (Delhi Metro Rail Corporation) enter an ‘elite league of the 7 percent of world’s Metro networks’ that can operate without a driver. It was initially set to roll out back in May but was delayed due to the COVID-19 pandemic. The Delhi Metro service was shuttered for nearly six months to avoid the spread of the virus.

The driverless metro operation may have commenced with the Magenta Line, but the government is confident of this technology. It plans to extend driverless trains to the 57-km long Pink Line (connecting Majlis Park to Shiv Vihar) by mid-2021.

This is a baby step towards making the complete Delhi Metro driverless. The Magenta and Pink Line combined will create a 94-km long stretch driverless, which seems like a lot. But, it covers only 9% of the ground compared to the massive Delhi Metro network. Further, the government aims to expand metro services to more cities in the coming years.

“The first metro in the country was started with the efforts of Atal Ji. When our govt was formed in 2014, only 5 cities had metro services and today 18 cities have metro rail services. By 2025, we will take this service to more than 25 cities,” said PM Modi at the inauguration ceremony.

Alongside the driverless metro train, PM Modi also shared that the National Common Mobility Card (NCMC) is now fully operational on the Airport line in Delhi. If you are unaware, this is a single card that can not only be used for public transport but also for paying toll tax, retail shopping, and withdrawing money if needed.

Delhi Metro Yellow Line Gets Free Wi-Fi Facility; Here’s How to Access It