If you’re a videographer or a photographer looking to get into the high-end territory of camera gear, I’m pretty sure you’re considering a bunch of different tripods for your kit. While major brand names like Manfrotto must already be on your list, they’re not the only ones offering great tripods. iFootage — a company specializing in camera equipment has its very own line-up of high-end tripods that you should definitely consider before making a purchasing decision. We have the iFootage Wild Bull T5 tripod ($322) at our offices and we’ve used them on quite a lot of shoots, so this is our review of the iFootage Wild Bull T5 Tripod.

Arguably one of the most important aspects of a tripod, the iFootage Wild Bull T5 doesn’t disappoint when it comes to the design and build. The T5 is built out of aluminum alloy and is honestly built like a tank. Nothing about this tripod feels flimsy, and on all our shoots (which sometimes involve going to far off places), we’ve never felt like the tripod might break. That’s something I’ve only ever experienced while using the Manfrotto tripod we use on a daily basis. 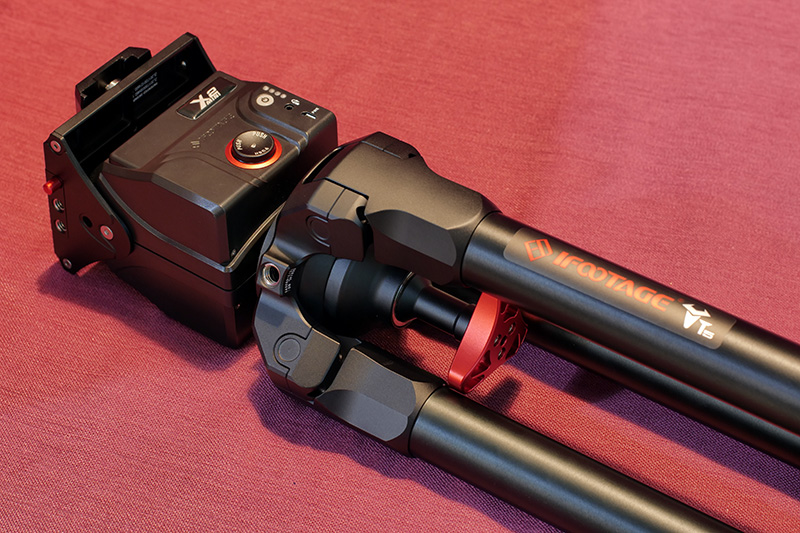 While most of the T5 tripod is built out of nice, heavy metal, the plastic bits like the top of the head, and the links between the legs are built out of composite plastic material that is shock proof and also resistant to heat and cold. Now we don’t get extreme winters here in Delhi, but we do get some incredibly hot summers, and the tripod has never had any issues even when shooting out in the sun, so iFootage definitely means business when they say it’s heat proof.

Other than that, the feet of the tripod are made out of rubber and are quite a lot wider than the feet on our Manfrotto tripod, which is a great thing as far as stability is concerned. There’s this rubber extension attached to the feet which makes it incredible easy to pull them up when closing the tripod. With most other tripods you have to grab the leg and pull it back but these rubber pulls make it extremely easy. 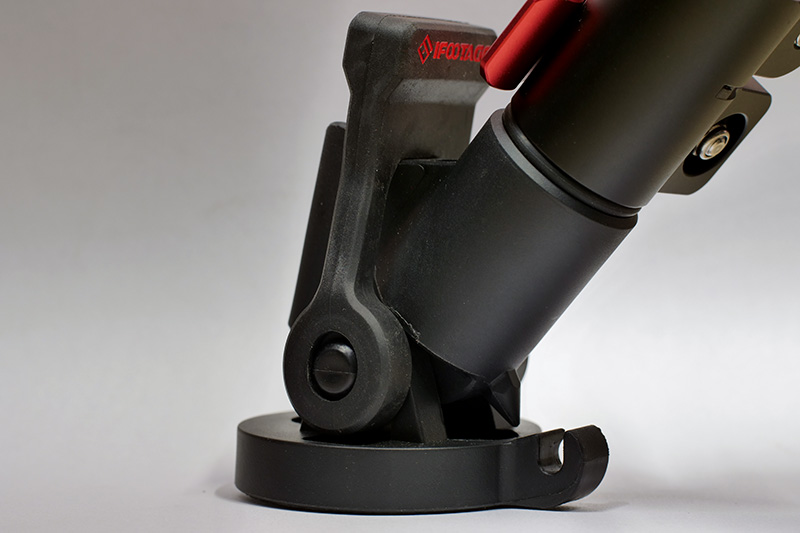 Plus, if you’re shooting out in the mud, or grass, or something, you can even remove the rubber feet to expose the pin-feet underneath it for better grip on such surfaces. Obviously, don’t use it on tiles and wooden floors or you might find yourself in dire need of hiding the scratches. 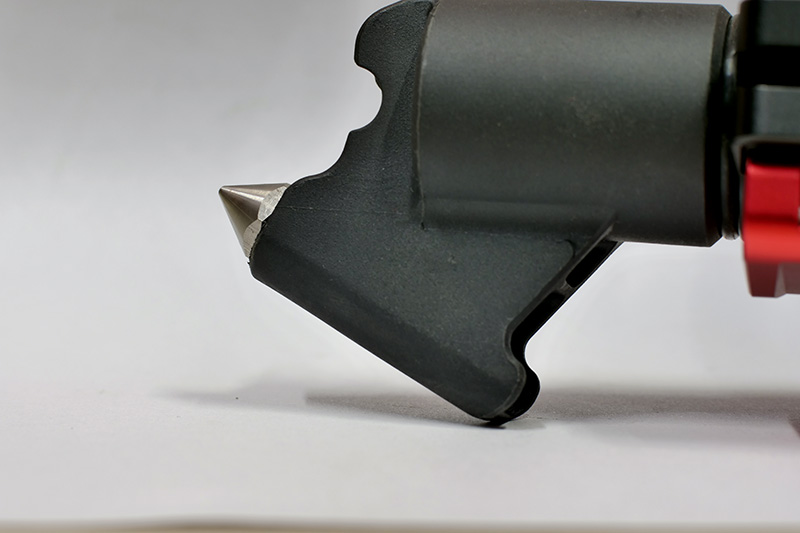 The T5 tripod has the characteristic iFootage red and black color scheme that looks really classy and I, personally, love how amazing it looks.

Setting Up and Using the Wild Bull T5

Unlike the Shark Slider Mini that we reviewed a while back, the T5 doesn’t really need any assembly — most tripods don’t. Getting the tripod up and running is pretty much the same as it is with any other tripod out there. You take the tripod out of the bag, open the legs and set it up on the surface you need. 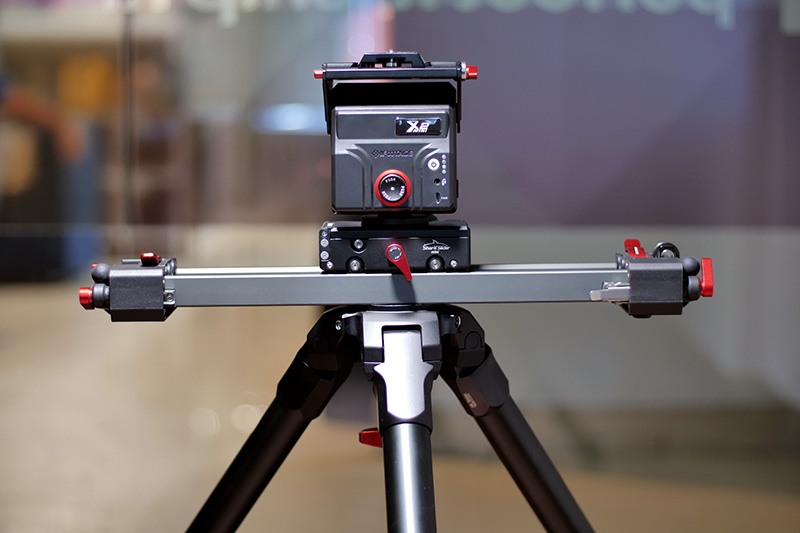 However, the Wild Bull T5 comes with some extra additions to make using it easier and better than most other tripods I’ve used in a long time. First off, the T5’s feet, as I mentioned earlier, are pretty wide which makes them a lot more stable than most other tripods out there (including the Manfrotto tripod we’ve been using as our go-to in the past). 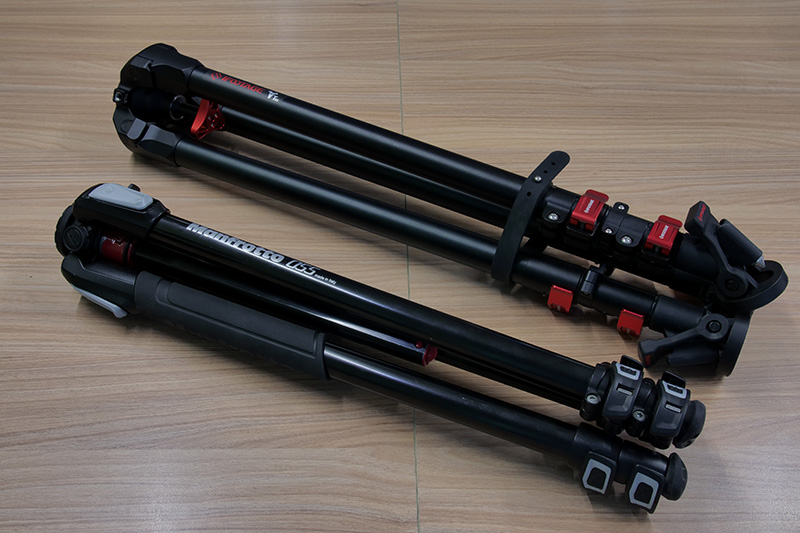 The leg-extension locks are a bunch of quick-release locks (two on each leg) that make it very easy to extend the legs without spending too much time on them. Just pull the latch, extend the leg to the length you need, and close the latch again. It’s a huge time-saver that’s a godsend when you’re in need of quickly setting up a shot. 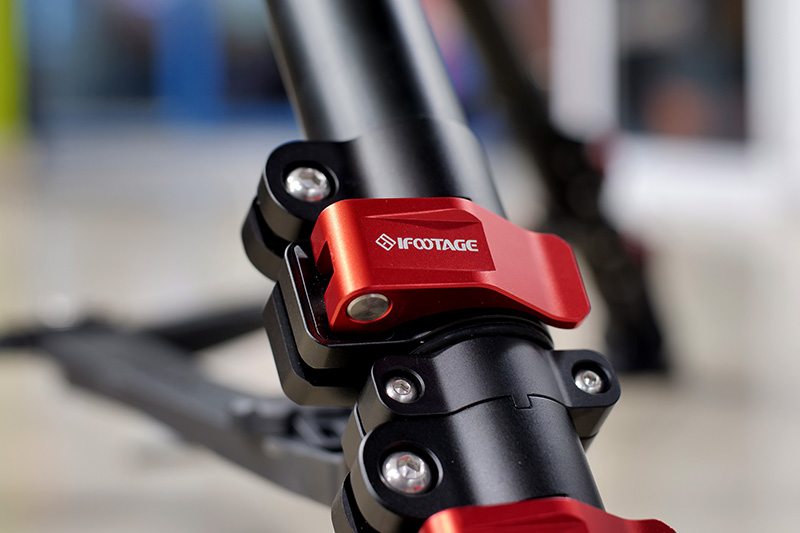 Other than that, iFootage includes a spreader in the bag, which while it may not look like much, adds a lot of extra stability to the tripod and I’d recommend that you use it at all times. It prevents the tripod from getting its legs extended on its own with heavy weights, and that’s something that’s really helpful. The spreader itself can be attached mid-way through the tripod, or at the very ground-level depending on the kind of stability you’d like, and the amount you’ve spread the legs to. 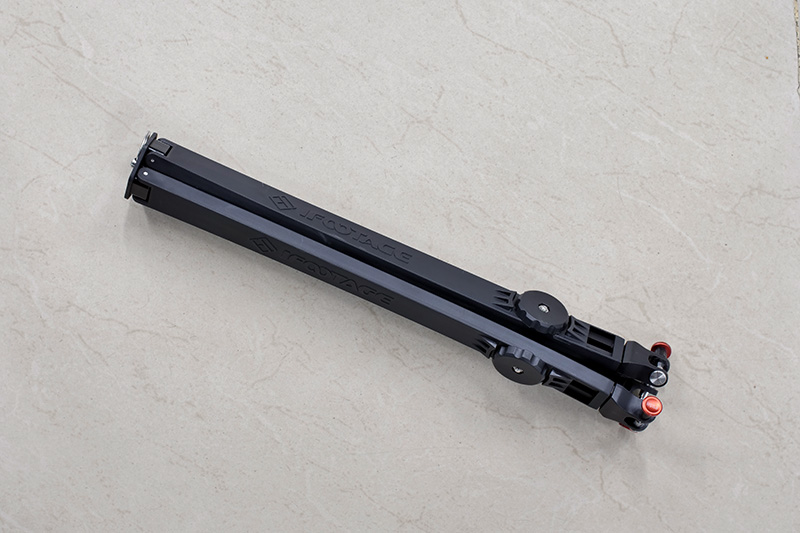 Add to all of that the ball-head that the T5 comes with, and it makes up for some really easy to set-up shots and also, as Sharun from our video team pointed out to me, allows to quickly level the camera without having to mess with the adjustment of the legs.

The Wild Bull T5 tripod supports a maximum load of 40kg, which means that not only can it easily handle cinema cameras, it can also take additional stuff on top without getting ruined.

Since the Wild Bull T5 doesn’t come with a head you can mount a camera on (no high-end tripod does), it leaves you free to use whatever head you prefer on your tripods. The tripod uses a standard screw on top, which means it’ll fit almost every tripod head out there.

We use a Manfrotto fluid-head for our shoots, and that head easily fits on top of the Wild Bull T5, which is great for us since that’s our preferred head for almost every shoot we go to. 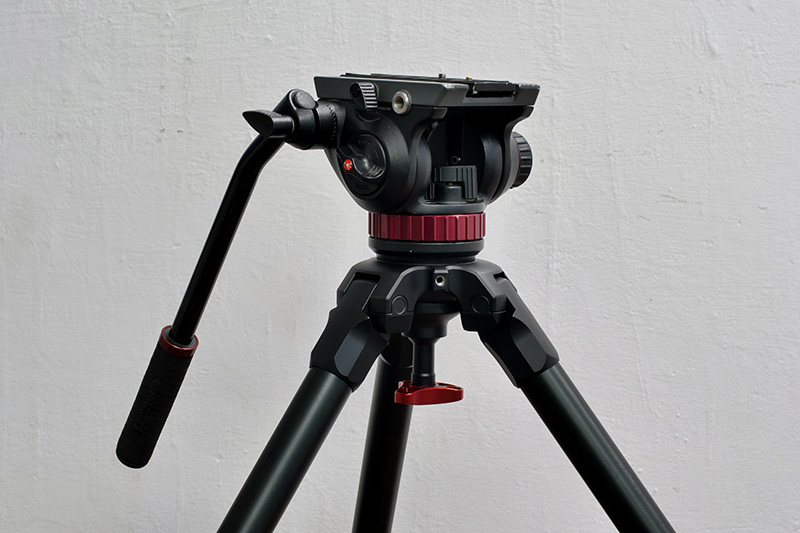 However, I also tried the X2 Mini head that we got for the Shark Slider Mini, and that fits in perfectly as well. So, if need be, we can swap out our Manfrotto head for the X2 Mini, and make use of its motorized pan-and-tilt to get smooth shots. 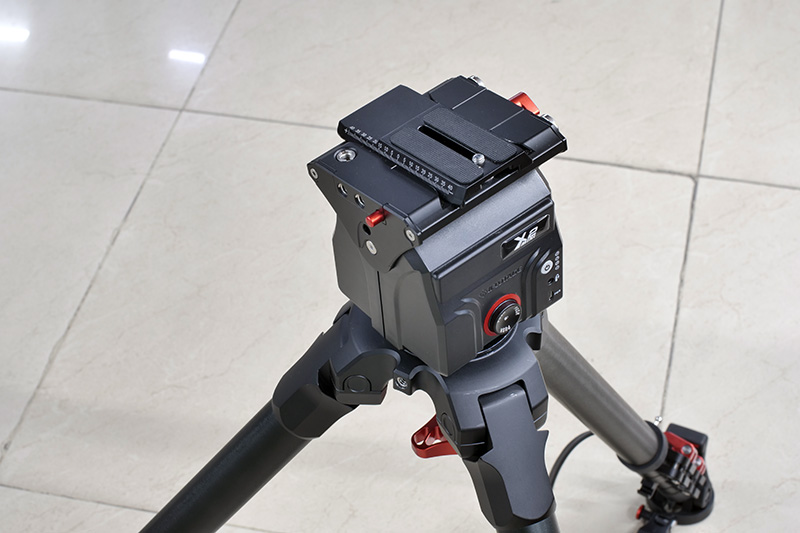 One of the major pain points for most high-end tripods is the portability, and the Wild Bull T5 doesn’t disappoint there either.

Since the tripod is made out of aluminum alloy, it’s pretty lightweight as compared to most other tripods that can support a weight of up to 40kg. However, that’s if your use-case requires heavy cameras and stuff to be mounted on the tripod. If you simply use the tripod for a DSLR, or something like the GH-5 that we mostly use, it is a bit heavy. That’s okay, though, because it’s not aimed at people who just want to mount a camera on it. 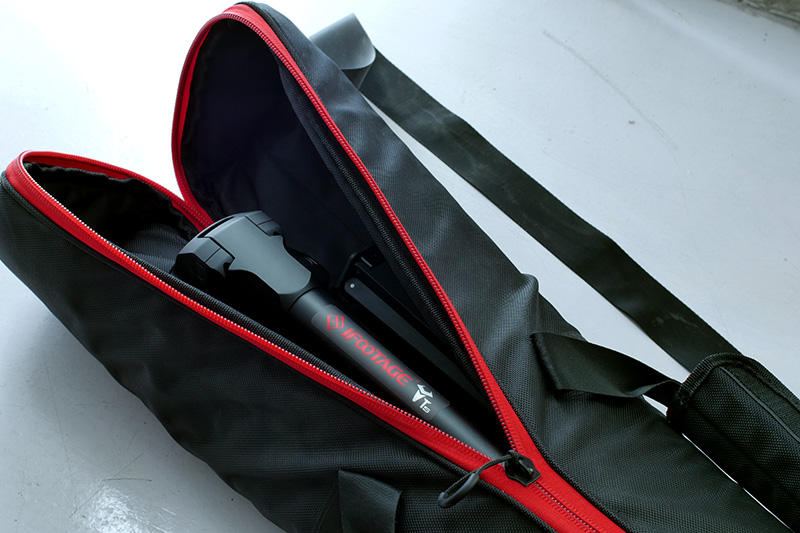 Plus, it comes with a great iFootage carry bag which is perfect for carrying around. It’s padded, and quite thickly so, I might add, which means the tripod remains perfectly safe packed inside it. The bag is also waterproof.

Even when you’re carrying the tripod without the bag, iFootage includes a rubber snap-on to keep the legs tied together making sure that they don’t randomly fall open while you’re lugging it around.

The Wild Bull T5 tripod is a pretty impressive piece of camera equipment. However, it doesn’t come without its very own set of pros and cons:

In conclusion, the iFootage Wild Bull T5 tripod is definitely a tripod that’s well worth the price. It brings a pretty-sweet design, it’s built pretty much like a tank, and it comes with some additional quality-of-life features that I really appreciate having on a tripod. Over all, for $322, the iFootage Wild Bull T5 is definitely not a tripod for beginners, but that’s okay because it’s not aimed at beginners. The T5 is aimed at pro users, and people who want heavier set ups on their tripod, and for all of that, this T5 tripod is something I can recommend with ease.

So if you’re looking for a great tripod that’s not only portable, but can also let you expand your set-up over time, putting heavier loads on it, the Wild Bull T5 from iFootage is a tripod you should definitely look at.