The Shark Slider Mini is a completely modular slider that you can mix and match to achieve different slider lengths, and a variety of shots with relative ease. In the bundle that we have, you get the following parts:

These parts themselves are enough to get some incredible shots although you can always buy more components to get an even higher level of flexibility while shooting. 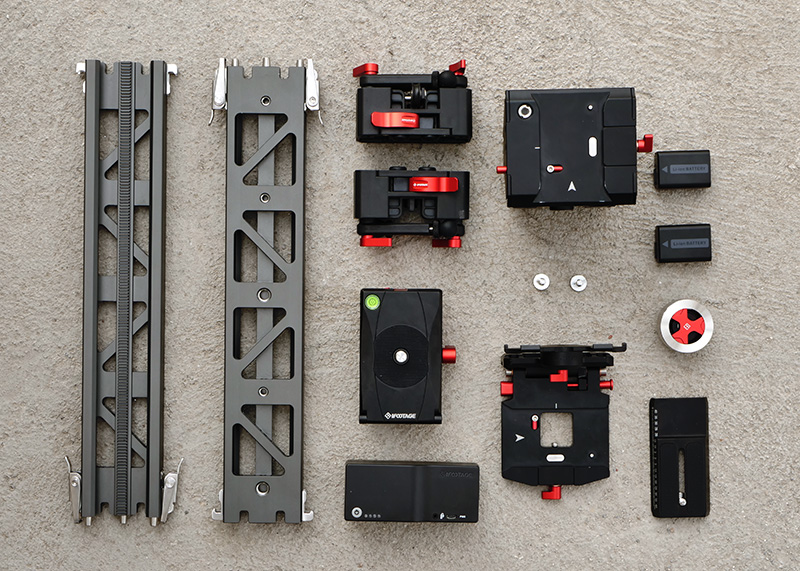 Build-wise, I have absolutely no complaints from the Shark Slider Mini, and the X2 Mini head. For the most part, everything is built out of lightweight metal, and the plastic components are incredibly well-built as well. All the quick release buttons (there are plenty of those) are also made out of brushed metal and painted with the standard iFootage brilliant red color that looks amazing in contrast with the grey and black tones of the rest of the slider. 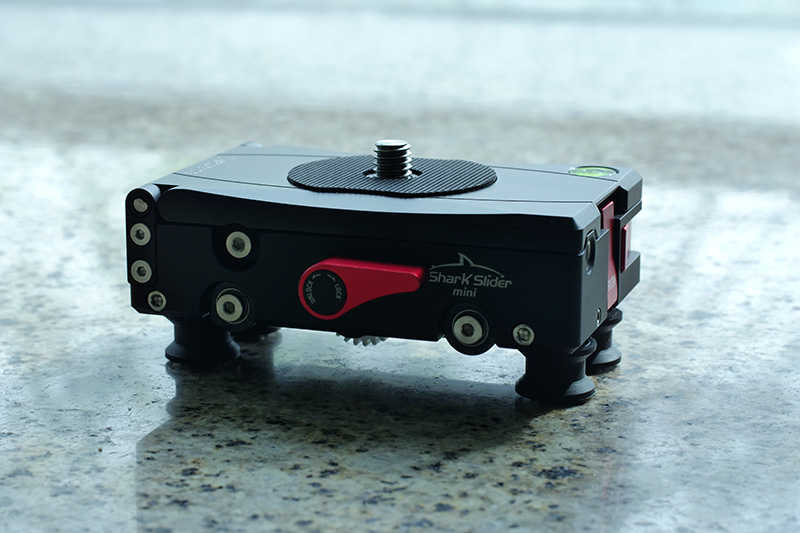 One of my favorite things about the way this slider has been designed has to be the fact that adding an extension rail offers two incredible things:

That second point is important because if a joint is uneven, it’ll result in a camera bump when the slider-motor passes over it, but with the iFootage slider, this isn’t an issue at all. From the feedback I received from the video-team, they love this particular attention to detail. Speaking of the video team, they did mention that the camera slip-plate is a little thin, but apparently that’s not really a deal-breaker. I mean, yeah, it’s thinner than the plate we’re using on the Manfrotto head for our everyday shoots, but it’s not so thin that it feels flimsy or anything.

Like I said, the iFootage Shark Slider Mini is a modular slider that comes with an assortment of bits and pieces, almost like a DIY project. However, even though this might sound like a daunting task, assembling this slider is a piece of cake. Even as a complete rookie with sliders when I first started testing this out, I was able to put the whole thing together without any help whatsoever, and that’s saying something. 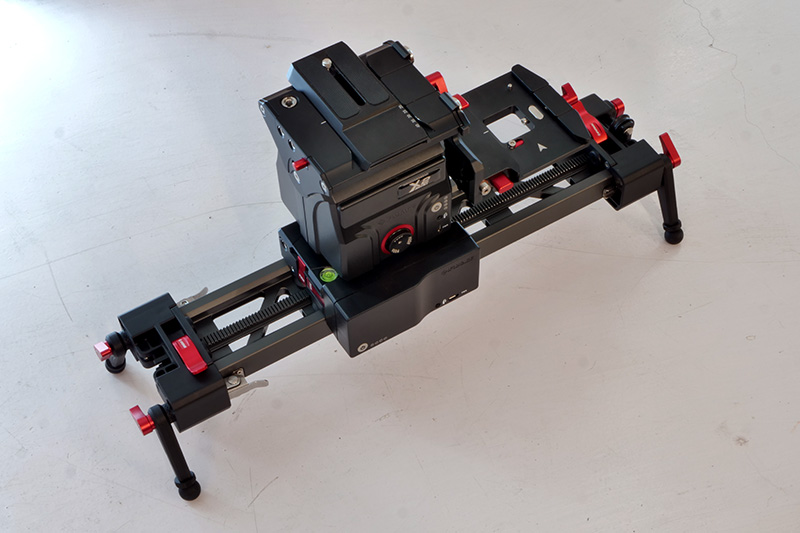 All the pieces either screw, or slide right into place without any unnecessary nuts and bolts to place. Everything is intuitive and everything seems to automatically fall into place with the Shark Slider Mini. The remote control motor attaches to the side of the actual slider-motor and powers the gears to move the slider as you command, the flywheel attaches to the same point for manual shots and really adds a nice counter-weight for a smoother manual slide control. The rest of the head and camera plates attach pretty much the way heads attach onto any camera and tripod in the world.

Over-all, this thing makes a lot of sense to carry on shoots simply because it’s very easy to assemble, disassemble and stuff into a backpack.

The iFootage app is a really great companion for this slider. It may not have the best design in the world (it certainly looks like the design wasn’t updated ever), and it might only be available on iPhones (which, I should’ve guessed from the ‘i’ in the name, heh), but it’s a remarkably easy to use and feature-laden app to say the least.

The home-screen of the app immediately shows you the things you can do with the slider, along with whether or not the slider and the head are connected to the app. If they are, you get a nice battery meter right there on the side, which is really helpful because the LED-indicators on the head and the slider-motor are really not the best way to judge how long the slider might last, and the last thing you want on a shoot is for your slider to run out of juice.

Other than that, there are Settings, and the Community buttons as well.

The ‘Timeline Control’ mode in the iFootage app allows you to manually set up the slide, pan, and tilt values for the slider in graphs for a very high level of control over the movement that the slider motor and the X2 Mini head make while shooting a video, a timelapse, or even a stop-motion video.

The ‘Manual Control’ mode is exactly what it sounds like. You get a joy-pad control to manage the slide, pan, and tilt of the slider-motor and the X2 Mini head along with buttons to ‘Lock Tilt,’ ‘Lock Pan,’ and more. This can be useful when you’re trying to set up a photo-shot, or for people who want a completely manual control over the movement of their camera during a shot.

The ‘Target Control’ mode is by-far the easiest to use, and also one of my favorite modes to use the slider in. With target control, you simply set up a shot in Point A, then slide, pan, and tilt the slider and camera to the desired final position and set Point B; once you’re done, the slider automatically moves from point A to point B while smoothly panning, tilting, and sliding along to get a great shot with minimal effort involved.

Stitching is a great mode as well. It has two shooting modes — grid, and panoramic. In grid mode, the camera basically takes multiple shots in a grid and combines them to get one super high-resolution photo for you. In the panoramic mode, you can set up the camera to take an automatic panorama that’s leveled perfectly and stitched perfectly as well. It’s awesome. 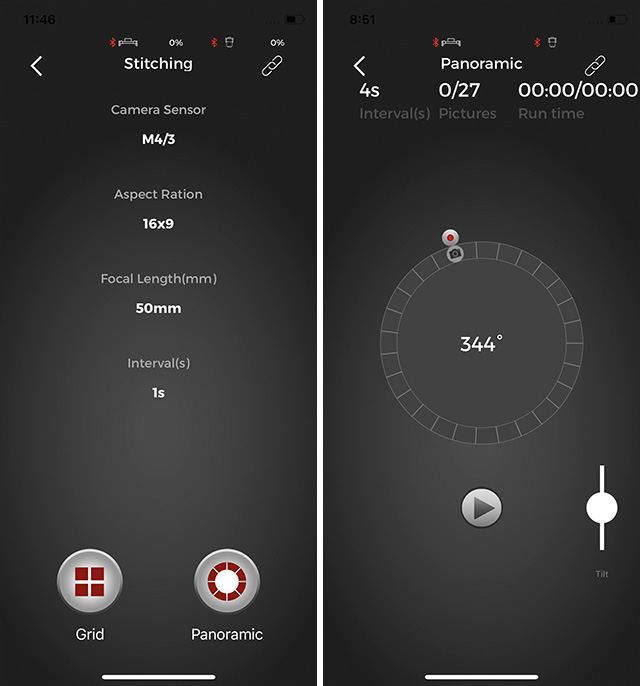 Under the Settings options you’ll get things like the ability to select the shooting mode, change the display units, and adjust the number of tracks installed. This is also where you can update the firmware for the slider and the X2 mini head (this is important because unless you’re on the latest firmware, you won’t be able to pan). 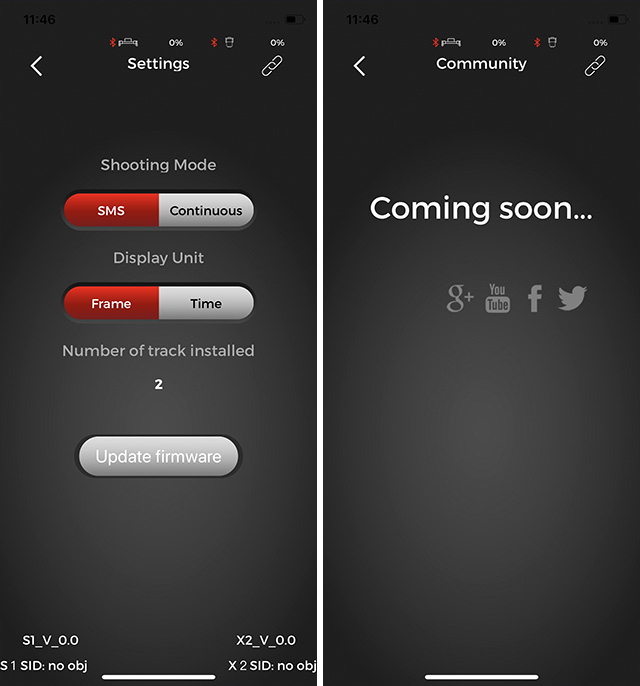 The Community button isn’t active yet, with the app simply displaying a ‘Coming Soon’ label there, although it looks like you’ll later be able to share your shots with the entire iFootage community if you so desire. That could help with getting shooting inspirations, and even just for showing off your shots for brownie points.

When it comes to usability, the iFootage slider is quite possibly the simplest to use slider I’ve ever come across (and I’ve had the chance to use quite a few). The app connects to the slider and the head via Bluetooth, and the connection process is incredibly easy and fast so you won’t have to fumble around in your iPhone’s settings all the time.

Add to the that the fact that the app is very intuitive even for first-time users, and the iFootage slider is one of the easiest to use sliders that offers an incredible amount of control for both beginner and pro users.

The slider itself can be kept on the ground, mounted on a tripod, and even put up at an angle, giving you the ability to take a variety of shots, in a variety of places. However, since the legs are small (for easy portability), you might encounter issues if you’re trying to use the slider in places with a lot of uneven ground (like a construction site or something).

Longer legs would’ve helped with that, but would’ve compromised portability, and the Shark Slider Mini is meant to be portable, so I understand why iFootage made this compromise. Portability also leads to a compromise in the maximum load value of the slider, with iFootage suggesting a max-load of 5kg on this, so forget about getting cinematic cameras on there. 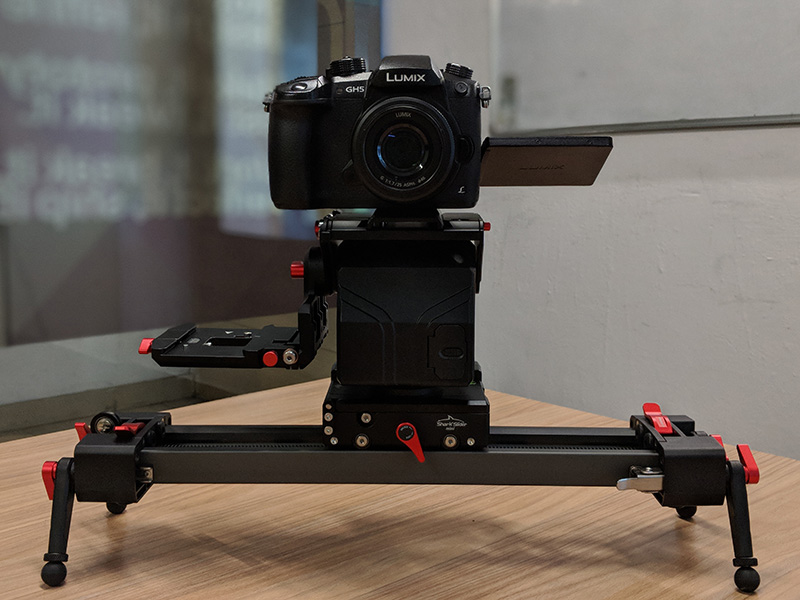 Since this is a modular slider, you can connect as many as 10 tracks together (judging by the app’s limit), but I’m sure if you went with more than those, you would still be able to use the app’s ‘Manual Control’ mode to use the slider easily. We only have two tracks, so I couldn’t test this out for myself and honestly, 10 tracks should offer you more than enough length for whatever it is you’re shooting (unless you’re taking a product shot of a Tesla Semi-truck).

Other than that, you can connect the iFootage slider directly to power, meaning if you’re taking a very long time-lapse, you don’t have to worry about the slider running out of charge in the middle of the shot. The Shark Slider Mini apparently has a maximum time-lapse limit of 7 days, which should prove to be more than enough for the majority of people.

We used the slider to take a number of shots for the OnePlus 6 first impressions video we did, and you can check those out below in the following times:

The Shark Slider Mini and the X2 Mini head both use the Sony FV-50 batteries that you’ll find in cameras like the Sony A7.

In our usage and testing of the slider, we found the batteries to last almost 3 hours on the slider motor, and 4-5 hours on the X2 Mini head, which is usually enough for our (relatively shorter) YouTube shoots. However, if you’re looking to shoot long timelapse videos and stuff, you’ll have to connect the slider to an external power source.

The batteries take around 2 hours to reach a full charge, which isn’t too fast but we found it acceptable, especially considering that most batteries take this long to charge anyway (including the ones we use in the GH-5).

While the iFootage Shark Slider bundle is almost a perfect slider for most purposes, there are certain pros and cons to it.

In conclusion, the iFootage Shark Slider Mini, along with the X2 Mini pan and tilt head offer almost everything a slider should offer, in an incredibly small and lightweight package making this combo the perfect fit for photographers and videographers on the go. The combo comes with a backpack that easily fits in all these components, along with all the cables, extra batteries, power-packs and more that you may need on the shoot. While you could also stuff in a smaller DSLM camera in there along with maybe a lens, I’d recommend using a separate bag for that if you’re anything like us and tend to carry multiple lenses and lights for the camera itself.