When we talk about modern-day jobs, the term “working 9 to 5” is getting more and more obsolete. Technology and the internet have made it easy for people to work with anyone, from anywhere, at anytime. In a team that consists of people from all over the world, it’s impossible to find the time that fit every team member. So, for us to have a remote meeting or working at unusual hours is not considered as unusual anymore.

While the goal might be about increasing productivity, these technology-driven working trends have a few negative side effects. One of them is the uncomfortable feeling we have when we are staring at the computer or gadget screen at night times (or quietly peeking into the smartphone’s screen right before we go to sleep). Fortunately, there are ways to solve this problem.

The Science Behind the Technology

To be able to address the problem, we need to go to the root of this problem. Many people seem to forget that biologically, the human body is wired to work the best during daylight. We’ve gone through millenniums of evolution refining our cells to get to that point. That’s something that can’t be changed within a few decades of working trends. You might think that you can adapt to the condition, but your body would tell you otherwise.

There are two negative effects of working in front of a bright screen at night. The most obvious one is eye strain. The gadget’s screen is designed to mimic the sun’s light spectrum to make it comfortable to use during the day. But after the sun sets, this arrangement will make your eyes feel tired easily, especially if your working environment is a lot dimmer than your screen brightness. In the long run, this constant exposure to bright light to your eyes in the night will reduce their ability to function normally.

And it turns out that the exposure to light from self-luminous displays will increase your risk to have a sleep disorder since it shifts body’s circadian rhythm. Or in simpler words: working with your gadgets at night will reduce your ability to sleep well, and mess up body’s natural clock. For those who wants to know more about the science behind it, there are several studies done on the topic, such as this, this, this, and this.

And here’s the quick explanation. Human body produce a sleeping hormone called melatonin. The short wavelength part of the sunlight (around the blue spectrum) suppresses the production of this hormone. That’s why we are more alert and awake during the day. Since the light from your gadget’s screen is designed to mimic sunlight, it also has the similar effect up to a certain level.

Tips and Tricks to Lessen the Eye Strain

There are several ways that we can use to lessen the negative effects of working with gadgets at night.

The most obvious solution is to reduce your gadget’s screen brightness to the level that doesn’t hurt your eyes. Almost every modern-day machine with screen comes with this brightness adjustment feature. Some have dedicated buttons to do so; some others relies on the software. 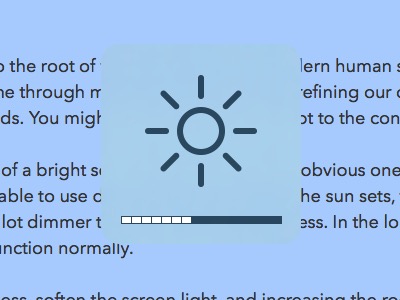 If you use Mac, you can reduce the brightness lower than the standard minimum level. Using the combination of Shift + Option + F1/F2, you can increase or decrease the screen brightness in a small and precise 1/4 incremental steps. With this trick, you can go from 1 to 3/4, then 1/2, and then 1/4 of screen brightness level before it reaches the total blackness of 0.

There are several apps – both for desktop and mobile – that have “night mode” feature. Usually, they are applications that doesn’t rely too much on colorful graphics, something like a text editor or spreadsheet. There are several variations of the feature, but it will invert the dominant color. The background of the app will use the darker color than the foreground, for example, white text on black background. 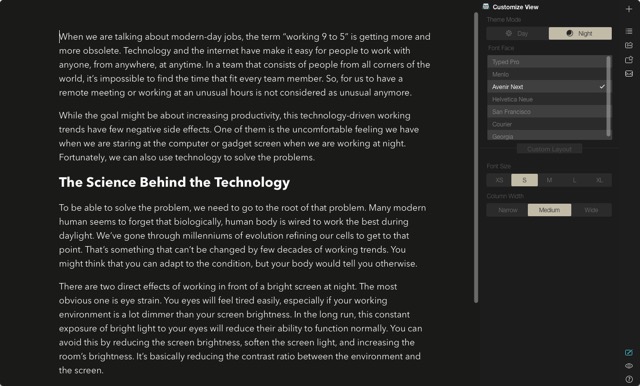 By turning on the night mode, you eyes will get much less exposure to bright light, and you can work more comfortably. Unfortunately, the mode is not always available in all apps.

Since the studies mentioned above have shown us that the culprit of the problem is the blue spectrum of the light emitted from the gadget, we can solve the problem by just eliminating the blue. That will leave your screen looks warmer and reddish, which is easier to the eye in the environment without the sunlight. Several apps use this principal to help you reduce the eye strain and keep your body clock in check.

This app might be the one that started the trend. It was built by two former Google employees Michael and Lorna Herf. At first, this husband and wife pair begun to build the app for a different reason. They both noticed that the glow from their gadgets at night gave off the “eerie blue” look. So they worked on the solution to reduce the blue, leave the red tint, and made the display look better and more natural in the evening light. Then f.lux was born.

During the time, f.lux evolves from a simple script that stripped out the blue from the display, into one that will synchronize with the rising and setting of the sun based on the geographical location of its user. It will slowly adjust the colors of your screen to be easier in the eye according to the time of the day. 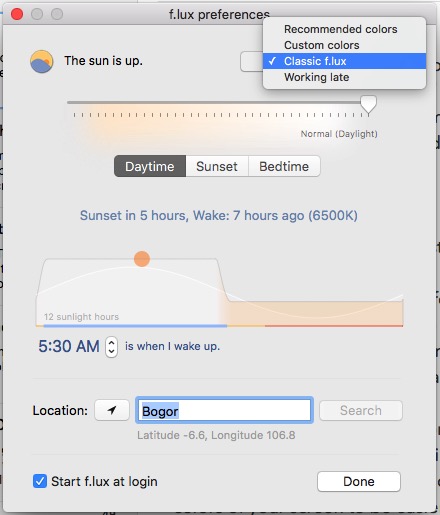 Upon installation, f.lux will ask you to choose the color scheme and your wake up time. Then you can set the app to determine your location automatically, or you can search for it manually. Then you can forget about it, and f.lux will do its job quietly from the background.

Red Shift is an open source alternative to f.lux. The developer admitted that the app was inspired by f.lux, but he wanted to create his version because he was dissatisfied by the buggy clone of f.lux for Linux called xflux. Even though the official f.lux is now available for Linux, Red Shift development continues.

Red Shift installation requires you to have the know-how of command lines. If you like to customize the functionality of the app, you may do so. But it’s not recommended for coding blind people like me. Red Shift is available for Linux and Windows (beta).

You can enable the feature quickly by sliding up the Control Center from the bottom of your iOS screen. Then tap its icon in the middle (between the Timer and Calculator icons) to activate it. 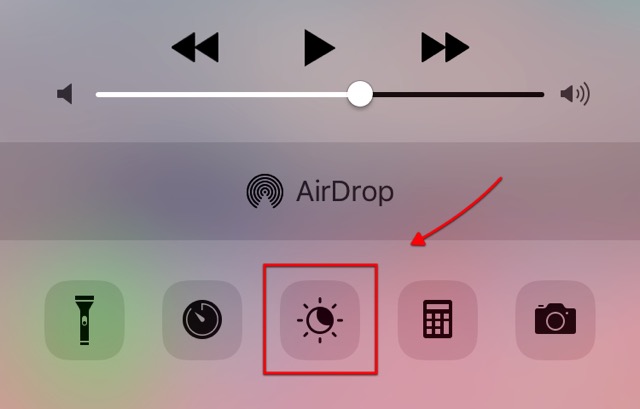 You can also schedule it to run automatically every day within a set period and adjust the color warmth by going to the Settings – Display & Brightness – Night Shift. Less Warm means more orange while More Warm means there’s more red added to the orange. 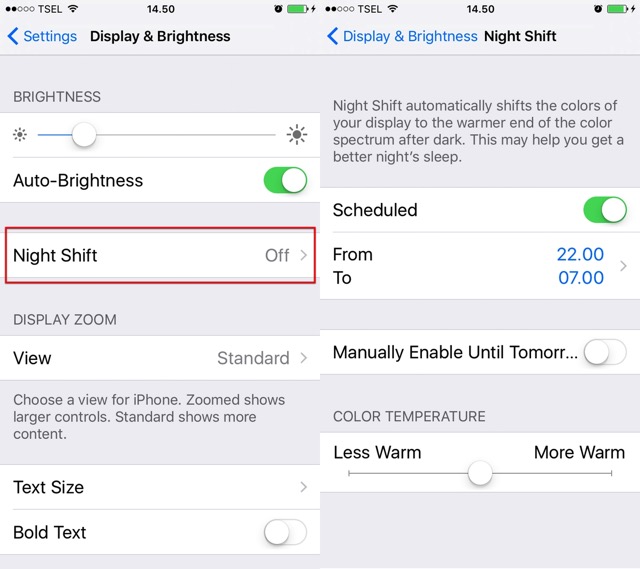 Please note that Night Shift mode is not available if your iOS device is in Low Power Mode.

Night Shift is available for iOS only but you can have similar functionality on Android, here’s how.

Non-rooted Android users who want to have f.lux-like feature on their phones can install Twilight or Bluelight Filter. They use the similar principal of reducing the blue light emission and synchronizing with the sun cycle.

Twilight and Bluescreen Filter is available for Android devices. 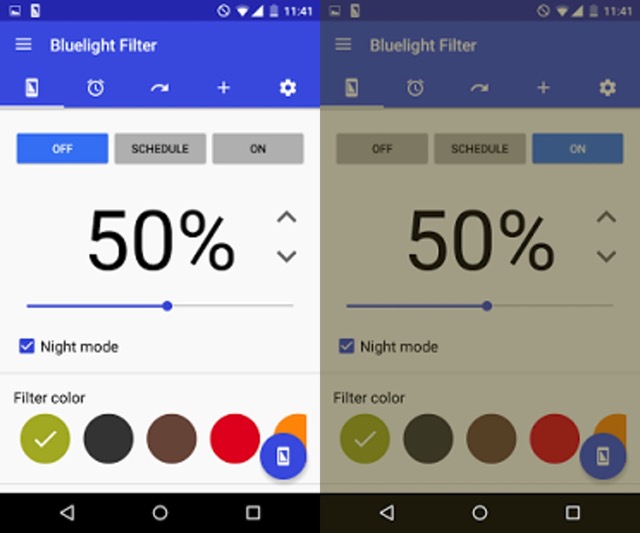 SEE ALSO: How to Make Windows 10 More Accessible For People With Low Vision

Do you work at night or use gadgets before you go to sleep? Have you tried one of the apps mentioned above or do you have your favorite apps to reduce eye strain? Feel free to share using the comment below.