Skip to content
Home Mobile Android How to Get iOS 9.3 Like Night Shift Feature on Android Without Root

If you aren’t living under a rock, you must have heard about the all new feature called Night Shift launched with the Apple iOS 9.3. The feature aims to cut down on eye strain when you are looking at your phone screen at night, in low light conditions. Night Shift cuts down on the bright blue light that can keep you awake. It makes the color of the screen more orange to reduce eye strain, by making the screen less glaring. According to studies, the orange filter is said to make it easier to get to sleep, after working on the iPhone or iPad for hours.

In the beginning, I mentioned that the feature of Night Shift is ‘all new’ in version 9.3. But the truth is, this feature has been there for years for our computers and was recently launched in App Store for iOS under the name of F.lux. But the app was pulled down from the App Store for unknown reasons and now we all know why. Just so that iOS can market that as a built-in function in their OS.

The app is not new and has been there for years on the Android Play Store too, however it required root to function. Still, there are alternatives that an Android user can try to get a similar Night Shift feature on Android and we are going to talk about two of them that works great.

The first free app that you can try on Android to get Night Shift feature is Night Shift: Blue Light Filter. The app is very simple to use and after you have installed it, you would just need to launch the app and activate the filter. The app has different settings for the day and night filter and you can tap on each of those to set the opacity level. 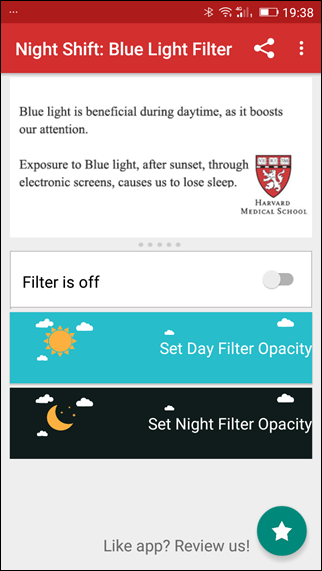 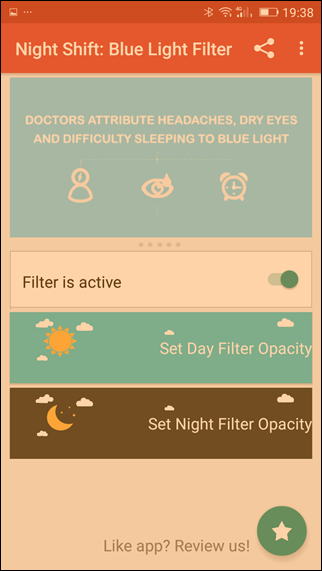 At day time, you would want to reduce the filter and even keep it to zero. The filter of the night is what matters the most. The app will change the filter automatically depending upon the time of the day, however if you are doing any color oriented work, you can turn off the filter from the notification drawer. 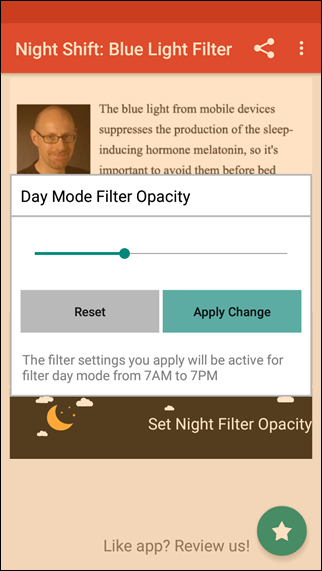 The only issue with the app is that the night and day time is hard coded to 7 AM and 7 PM. Ideally, that changes depending on your geographic location which is where the next app comes into the picture.

Twilight is another app that you can try. It also filters the flux of blue light emitted by your phone or tablet after sunset and protects your eyes with a soft and pleasant red filter. The best part about Twilight is that it’s automatic. Once your location is set, it will automatically change the screen filter depending on the sunrise and sunset time locally. 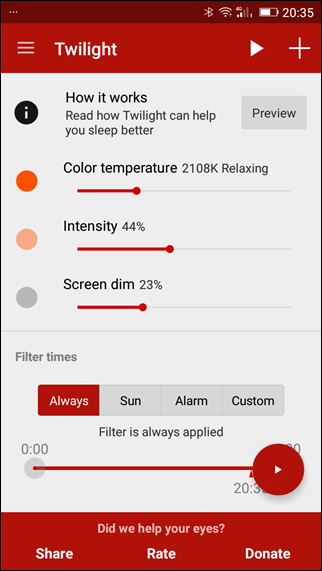 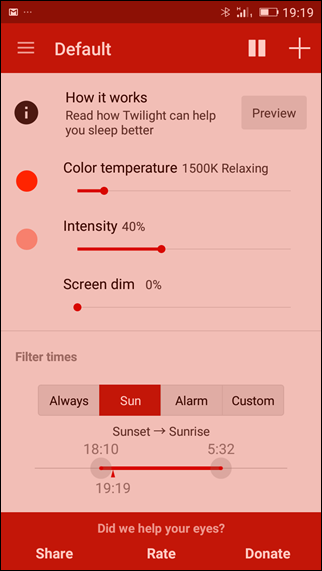 You just need to set the color temperature and intensity and the app will take care of the rest. You can also schedule different profile in the app. Like while reading in no light, you might want the maximum red light filter, but if you are in a coffee shop, you might keep that to a minimum and this can be done using the profiles. 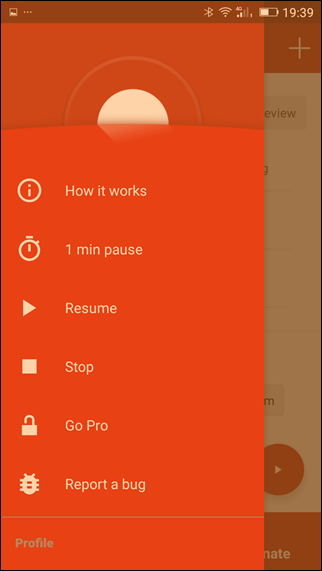 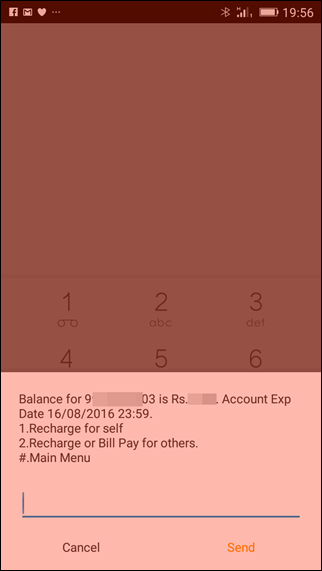 The app also lets you turn off the filter using the notification drawer for color intensive work and there’s also a pro version available just in case you wish to donate the developers for less eye fatigue and good sleep at night.

These two are the best apps to get the Night Shift feature on your Android, however if you are looking for more alternatives you can try Bluelight Filter – Night Mode. Nevertheless, if you have root access on your Android smartphone, the only app you should install for this feature is F.lux. It’s the pioneer and the creator of the idea and you can never go wrong with it.

SEE ALSO: How to Get Samsung Always-On Display on Any Android Device

Happy Reading to You

So make sure you use these apps while using the smartphone under low light conditions, especially before bedtime. It’s not me, but a scientist who says that it will help you reduce your fatigue and help you relax more while sleeping and of course, less dark circles.