Universally accepted, HDMI — High Definition Multimedia Interface — is practically a better way for clear, uninterrupted media transfer between a variety of devices. Between a projector and your laptop, between an HD LED TV and your PlayStation and between your PC and the HD Monitor; everywhere, HDMI would do the job, just right. What you need is just a functional HDMI Cable.

The fact is that any HDMI-certified cable would be capable to give you a clear-cut content transfer and performance, in the long run. There are only two variants available — an HDMI standard and HDMI High Speed, the latter of which can support 4K. There’s a premium-certified HDMI Cable — called HDMI 2.0 — which is apparently superfluous.

Nevertheless, you can take care of some factors while choosing a HDMI Cable. For instance, the use of material may have an impact on signal interference whereas the use of Active material would boost signal health. Also, some cables come with Ethernet support — it is still a yet-to-use feature, by the way. In this post, we have a list of top 12 HDMI Cables we found in stores. 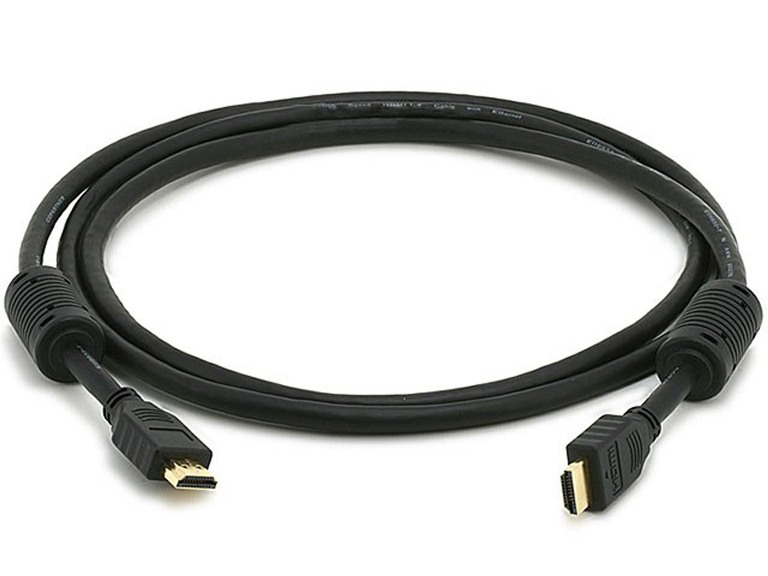 Monoprice Select Series High Speed HDMI Cable with Ethernet, as that name says, is the High-Speed variant of HDMI cables. It’s a cable that has been praised by experts as well as common users, as it has a good build and an affordable price. The cable supports data throughput of 10.2Gbps, thus giving you support for both 4K and 3D. It has a length of 6ft, which is satisfactory for home use. Another feature is the use of gold plated connectors. Also, it has HDMI-based features include deep colour, Ethernet channel, audio return channel etc. 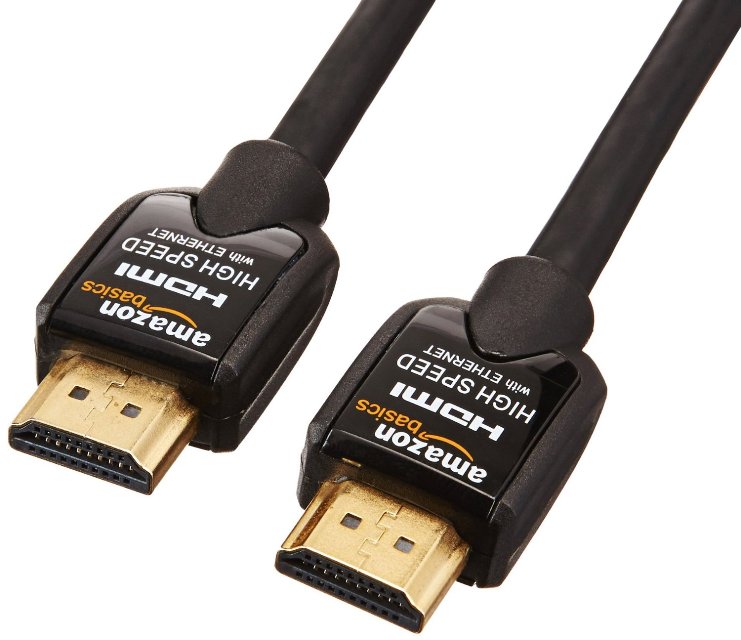 Being a product from AmazonBasics — a sub-venture of Amazon, for creating high quality cables and basic stuff — its quality is undeniable. It can offer you the support for 4K content, 3D video and other features mentioned in the High Speed variant of HDMI, including deep colour and audio return. It doesn’t matter whether you’re having a PS3, Xbox or an Apple TV, AmazonBasics High Speed HDMI Cable would do the job very fine. The cable has a length of 6.5ft that is nearly 2 meters. It uses gold-plated connectors for superior conductivity, minimizing corrosion and enhancing your signal effectively. It comes with an A type connector, by the way. 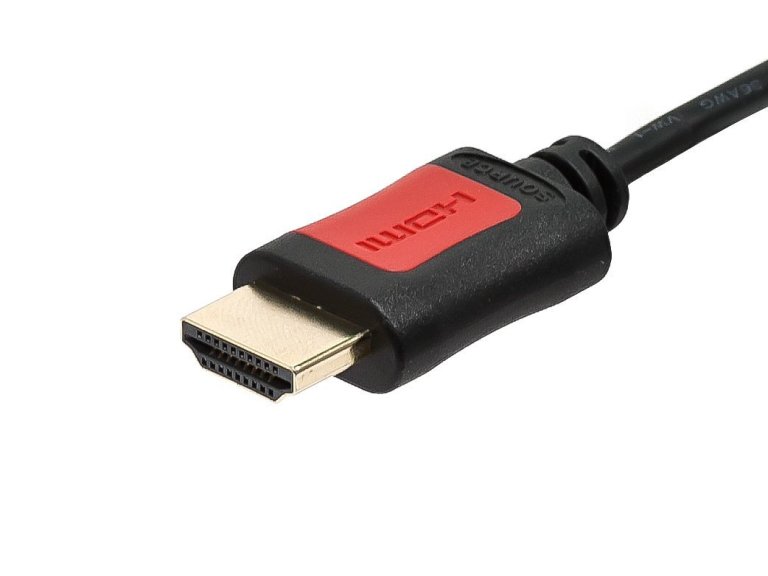 This product from Monoprice is meant to help you when you need to stream content to a distantly-placed device, no compromise made of quality. Naturally, you can’t get such a High-Speed HDMI Cable that has data throughput of 10Gbps, but Monoprice has RedMere Technology. By the way, Active HDMI Cables are supposed to be connected in the mentioned direction — there is In and Out portions. The best thing about preferring Active Select HDMI Cable from Monoprice is that you can cut an HDMI Signal extender from the list, thanks to the RedMere chip included. You get all the features of a typical High-Speed HDMI cable, such as 3D, 4K and there’s Ethernet too. 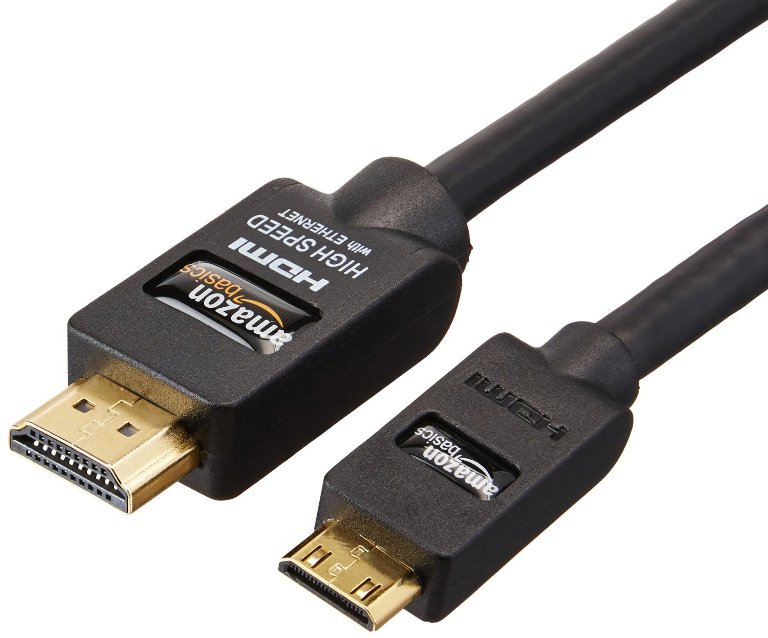 This HDMI cable from AmazonBasics can be used for two devices that have Mini-HDMI and Standard HDMI ports. Suppose one of your devices has a Mini-HDMI port and the HDTV is having a full-sized A-type HDMI connector. Then, you have to purchase this cable. Being a HDMI-certified High Speed cable, you need not to compromise features like 3D content support, 4K video streaming and audio channel. The different that matters here is the use of connectors. Just like the other products from AmazonBasics, this HDMI Cable comes with gold-plated connectivity for durability, signal boosting and stability. The cable has a length of 9.8ft, but there’s a shorter version available 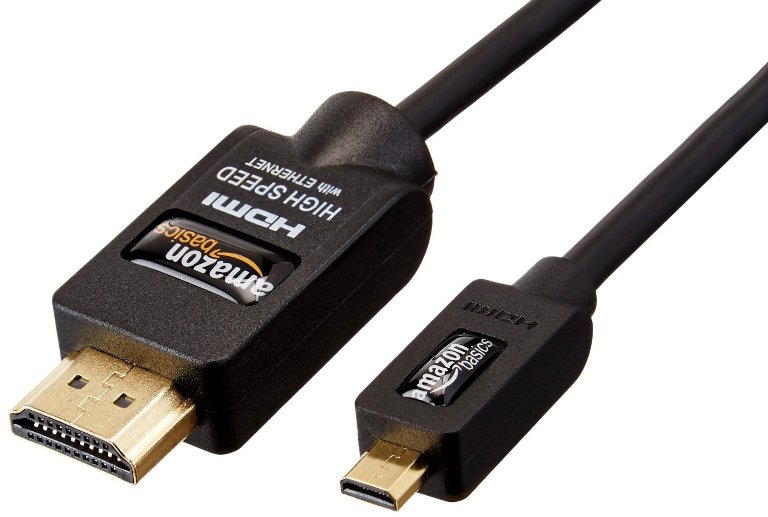 Here comes another connector-based variant of HDMI Cable from AmazonBasics. With AmazonBasics High-Speed HDMI Cable, you can connect two devices, one of which has micro-HDMI port and another with standard HDMI port. It has a length of 1.9meters, which is satisfactory to go. Never mind the connector difference; you don’t have to pay any attention as to the streaming quality. You get every feature including 4K and 3D along with audio return. And, it works with all HDMI-enabled devices. It’s useful for those who have a GoPro. 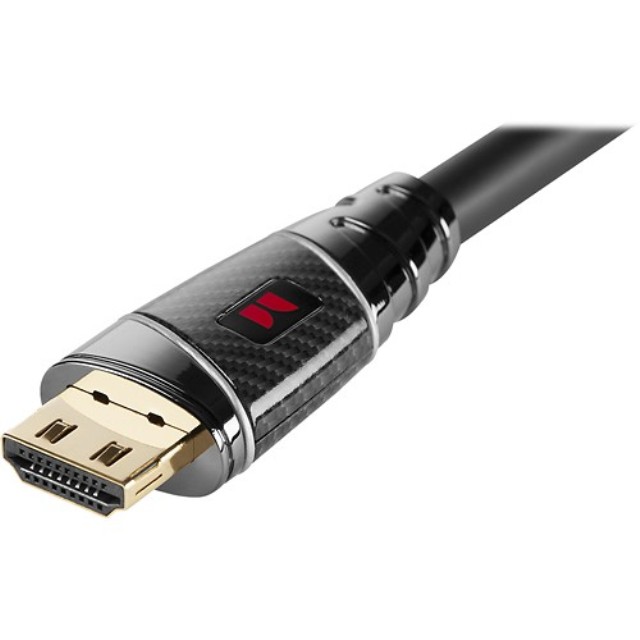 This HDMI cable is actually powered by HDMI High Speed standards, meaning that you can use it for streaming both 3D and 4K content, seamlessly. Also, you get the additional features such as the included Ethernet connectivity that’s good enough in network-based environments. Also, Monster Black Platinum Series In-Wall HDMI Cable comes with a V-Grip technology, which claims to offer a reliable connection between devices, even while ensuring security. Also, it is an in-wall rated HDMI cable, so you won’t have many issues while installing it at home. It’s just 5inches long. But, it is way too expensive. 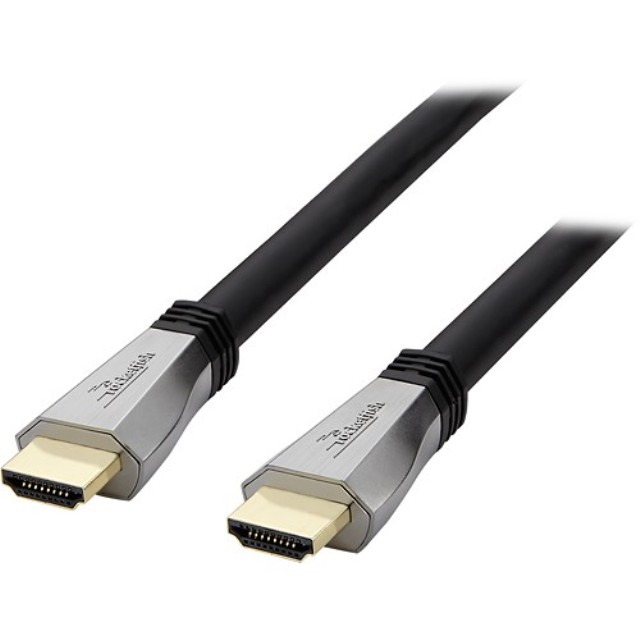 Yet another expensive HDMI Cable you can buy, Rocketfish In-Wall HDMI Cable comes with the support for 18 Gbps data throughput, which lets you handle 4K content easily. Also, you get features such as Deep Colour, Ethernet and audio return channel etc. There’s something to be talked about the material of the cable. It comes with 3-layer cable shielding for minimized effects of Electromagnetic Interference and RFI. While signal integrity is maintained due to the silver content soldering, 24K gold-plated contacts can boost the signal health, effectively. Also, being an in-wall rated High Speed HDMI cable, you’ve easier options of installation. It’s 12 inches long. 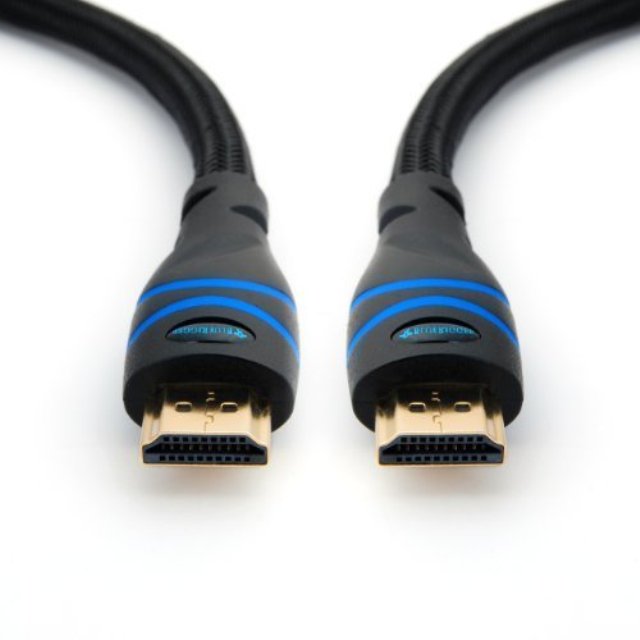 BlueRigger High Speed HDMI Cable with Ethernet can be a good choice when you need a HDMI Cable that has a nicer build as well as lower price. This High Speed HDMI cable offers all the features of Category 2 Certified HDMI, such as the 10Gbps bandwidth, ability to stream both 3D and 4K content, Audio Return Channel and Ethernet, as mentioned in the name. Also, you can be sure of its compatibility with majority of media devices, let it be Xbox, PlayStation or a Blu-ray player. Other features include its Nylon braiding; also, it has a metal jacket connector for an enhanced signal transmission. It’s 10ft long, by the way. 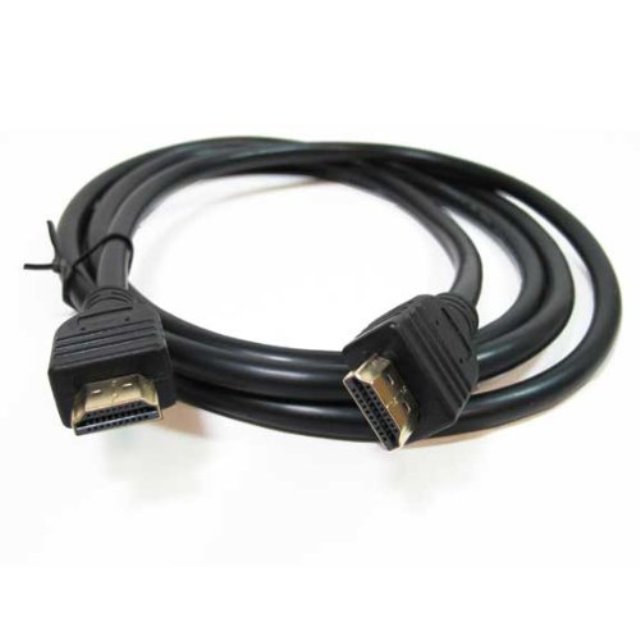 Link Depot HDMI Cable is a Standard HDMI Cable — not a High Speed one. So, you are going to have a bandwidth of 5Gbps only. If you are sure that the bandwidth would be sufficient, you can go with this one. It doesn’t offer support for 3D or 4K content, but you will be able HD content smoothly. Also, you’re going to miss Audio Return Channel. In spite of all these, if you feel good with the price and compatibility, you can check out this low-priced HDMI cable. It’s a length of 25ft. 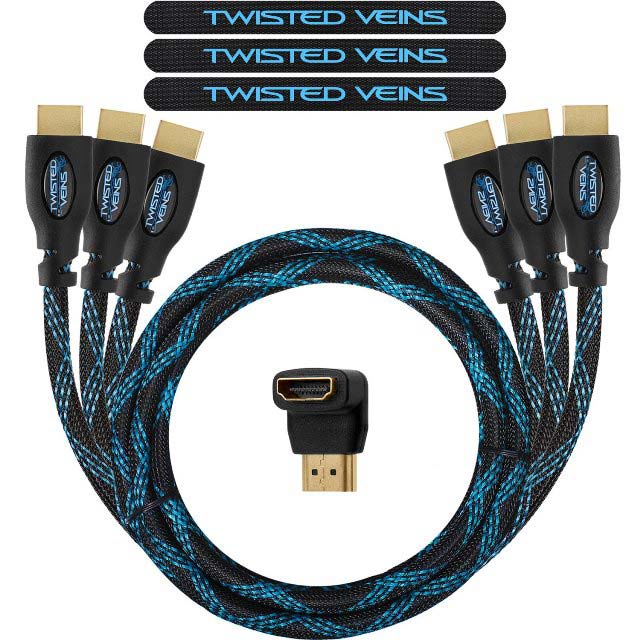 You can go with this deal of Twisted Veins High Speed HDMI Cable, if you would like to have some good accessory as you get three HDMI cables. Yes, when you purchase the HDMI cable, you get Velcro cable ties as well as right angle adaptor for connecting the cables. In short, you will be able to connect the cables easily using the included options. To enhance signal quality, Twisted Veins has used gold connectors while the braided jacket would be protective as in terms of function. Being a High Speed HDMI Cable, you’re assured about the content quality standards — 4K, 3D and whatnot. 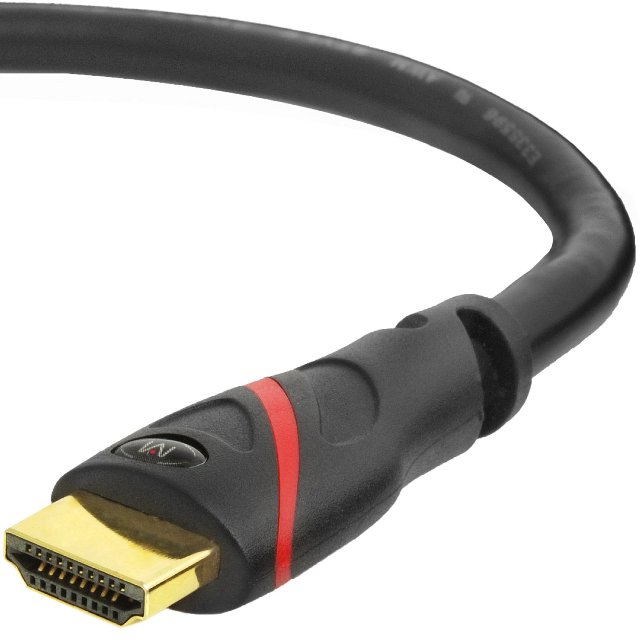 Mediabridge ULTRA Series HDMI Cable is yet another HDMI Cable that comes with premium construction as well as associated features such as triple shielding and the metal jacket connectors for enhanced signal boosting. It’s a high speed HDMI Cable, although the name doesn’t say so. It supports 3D, 4K and ARC. Also, you get Ethernet support for that matter. Also, compatibility of the cable is assured; from Blu-ray player to projectors, the cable would be able to do the job. It has a length of 25ft, by the way. 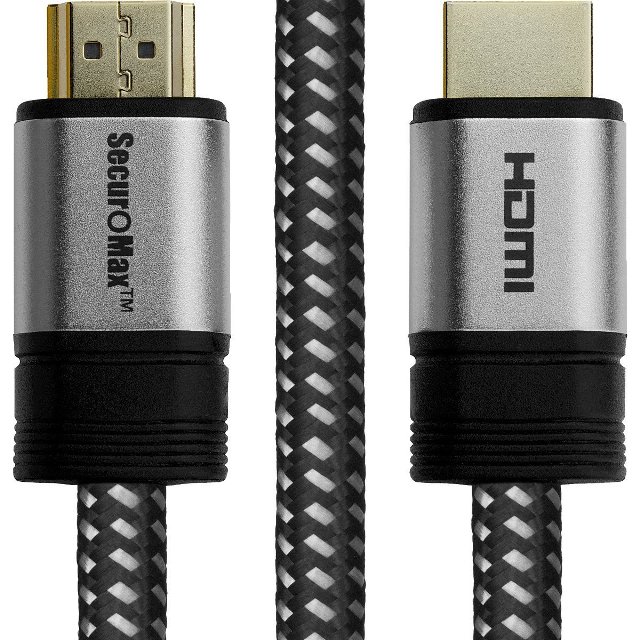 SecurOMax High Speed HDMI Cable claims to be one of the so-called HDMI 2.0 Ready HDMI Cables on the list. Those labels apart, you will be able to use it as a typical HDMI High Speed cable, with support for 4K video, 3D content and Ethernet & Audio channels. SecurOMax High Speed HDMI Cable makes use of bare copper triple shielded cables and it’s good from the signal efficiency point of view. By the way, it has a media bandwidth of 18Gbps, in case if you had a compatible content. Altogether, it’s good for the money you pay.

You’ve seen our list. Now, you can choose HDMI cable according to your requirement, convenience and budget, for that matter!