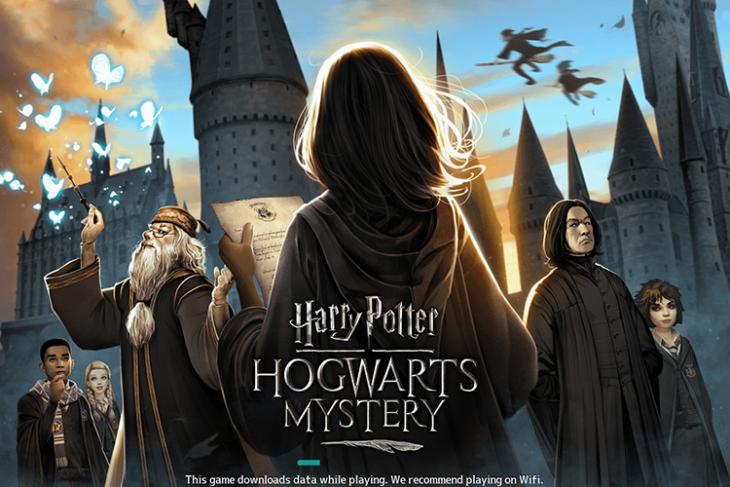 Jam City launched its new Harry Potter game — ‘Harry Potter: Hogwarts Mystery’ globally yesterday, and of course I checked it out. How could I not, being a Harry Potter fan for as long as I can remember?

If I had expectations from the game due to all the hype Jam City had managed to create around it, the game promptly let me down in a number of ways.

The game started off well enough, with a cutscene showing Minerva McGonagall sitting in her office, while a voiceover read out a Hogwarts acceptance letter. Post that, I found myself in Diagon Alley, with a boy named Rowan who then guided me through purchasing my books and wand. That’s where I realized the game wasn’t as good as I had hoped it’d be.

Even as a game that’s not truly open-world, I had hoped that I’d at least be able to look around and explore on my own in the few places that I’ve been put in. Instead, the game gave me properly marked areas to tap on, and well-defined objectives to complete in order to proceed to the next chapter.

By the end of Diagon Alley, I was bored.

The game lets you choose your Hogwarts house, which led me right into Ravenclaw; but other than that, everything else in the game seems like a lost opportunity.

Everything you do in the game is more of a tap-tap experience than anything else. Conversations? Tap on the dialogue you want to say. In the middle of a lesson? Tap on various highlighted objects to complete certain tasks and, by extension, the lesson. In Charms class, I had to spend a minute or two just tapping to fill up the star meter and finish the lesson. 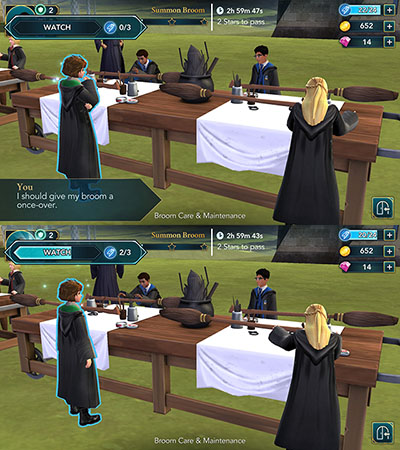 Then there’s the energy meter. Everything you do inside Harry Potter: Hogwarts Mystery requires energy, and while the meter refills with time, it’s really meant to drive people to purchase extra energy and move forward in the game. It’s all the more annoying, because if you’re in the middle of a class, or in the clutches of a Devil’s Snare (believe me, you are, at one point), and you run out of energy, you’ll either have to buy it, or just close the game and wait for the energy meter to fill up before continuing. 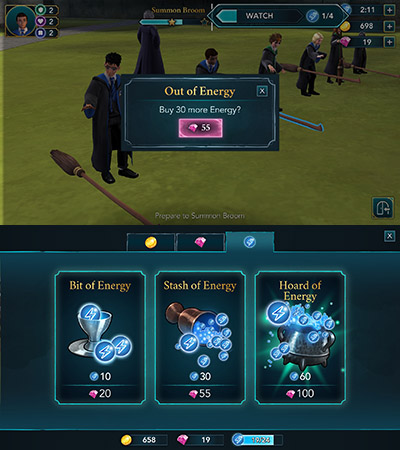 Believe it or not, it gets boring really quickly. Unless, of course, you shell out money to buy energy, which is just a very bad way of implementing microtransactions in a game.

Then there’s the simple fact that people’s reactions to particular dialogues are just not what they should be. In my first ever Charms class with Flitwick, he asked me if I intended to follow the rules, and being the sassy little kid that I am, I went ahead and promptly said “No.” His reply to that? Something along the lines of “I see, very well, take your seat.” I mean, really? A first-year student has the cheek to say that to you, and that’s the best you got? But that’s not even it.

In Potions, my cauldron exploded because a Slytherin sabotaged me, and when Snape enquired about my failure, I chose the third option that said: “It’s your fault.” Believe me, I literally told Severus Snape, that my potion exploding was his fault, and he took 10 points from Ravenclaw and that was it.

That’s just laughable. Severus Snape doesn’t take cheek, most definitely not from the first year who has just proven that he can’t brew a simple cure for boils. If this is a game based on choices, it does not do that very well. Maybe once I’ve unlocked most of Hogwarts I can roam around the castle freely, but I’m not willing to spend my time on the game just hoping that it’ll get better. Gameplay-wise, Harry Potter: Hogwarts Mystery completely falls flat, and while there are better things you can do with your time, if you’re a Harry Potter fan, I’m sure you can’t resist yourself from playing. In which case, the game is available on both Android and iOS, so go ahead and check it out if you still want to.