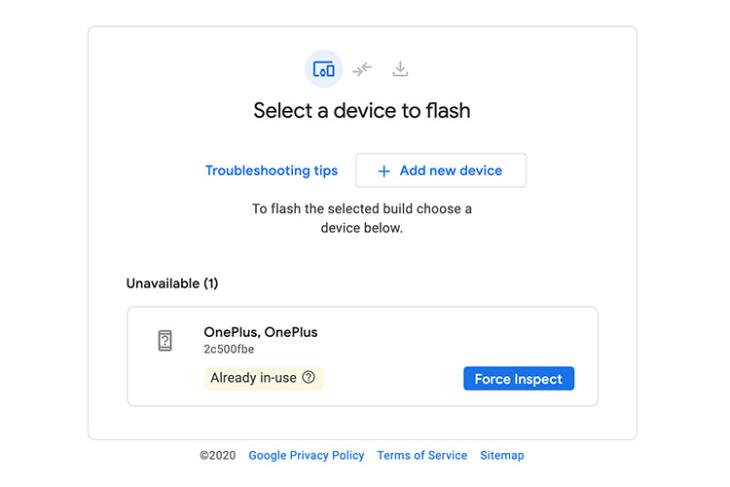 Google has released a new software that it says will make it easier for developers working in AOSP to flash new builds onto development devices straight from the web-browser. Called Android Flash Tool, the software enables users to flash devices with builds listed on the Continuous Integration Dashboard and, can be used by developers working on the Android OS to test changes or app developers to test compatibility with the latest AOSP build.

According to an official blog post from Google, the new tool allows anyone to flash Android builds on supported smartphones from browsers supporting WebUSB, such as Chrome 79 or Edge 79. “After connecting a device and authorizing the page to connect to it users will be presented with a list of available builds. After choosing a build click flash and the tool does the rest. You can flash recent Pixel devices and the HiKey reference boards with builds based on aosp-master”, said the company.

The new tool is expected to streamline the process of flashing nightly builds on Pixel devices, meaning developers can now repeat the process more frequently without having to go through the convoluted multi-step processes that they have to currently endure. The Android Flash Tool is available on Linux, macOS, ChromeOS and Windows, although, on Microsoft’s operating system, it requires additional drivers to be installed.

While Google launched Android’s Continuous Integration Dashboard back in 2018 to give more visibility to new AOSP builds, they were still not available for regular users and flashing still required a manual command-line process. That, now, is expected to change with the new flash tool, so if you are a developer working in the Android eco-system, you can learn more details about the project or try the software yourself from Google’s dedicated Android flash Tool website.

Bear in mind, however, that this tool isn’t meant to get something of an OS upgrade on your system, and is solely aimed at developers looking to ensure their apps are compatible with the latest changes made to AOSP.