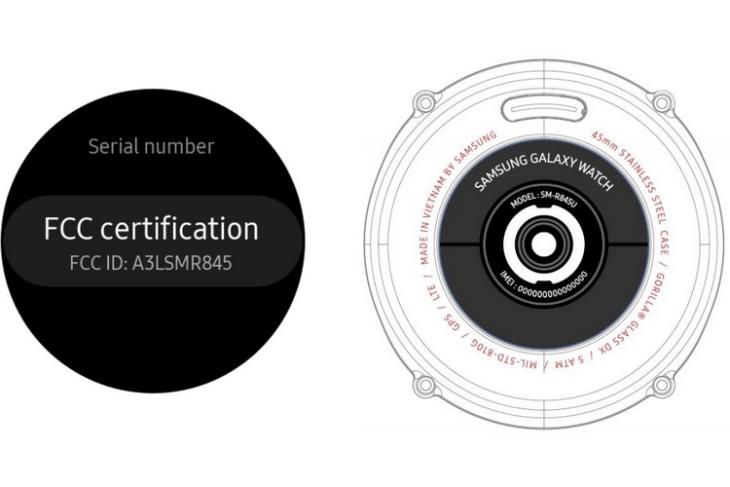 Two new Galaxy Watch Active models from Samsung have been certified by the US Federal Communications Commission (FCC), revealing several key details. The upcoming devices have model numbers SM-R845 and SM-R855, and both will offer LTE connectivity alongside Wi-Fi and Bluetooth. While the former comes with a 45mm case made out of stainless steel, details about the latter are a bit more fuzzy.

As can be seen from the image above, the R845 will have MIL-STD-810G durability and 5ATM water resistance, meaning, it can remain submerged in up to 50 meters of water for 10 minutes without getting totaled. The image further reveals that the display on the watch will be protected by Gorilla Glass DX, while connectivity options will include GPS. The image also suggests that the device will be manufactured in Vietnam.

There’s no info about the R850 at this time, but reports seem to suggest that it might be a smaller variant of the R845. While a higher model number typically means a larger or more powerful variant, Samsung’s watches generally go the other way with their model number hierarchy. As pointed out by Droid-Life, the larger, 44mm Galaxy Watch Active 2 from last year has the model number R820, while the smaller, 40mm model is R830.

It will be interesting to see when Samsung finally announces its next-gen Galaxy Watch Active lineup, but one would suspect that it would be sooner rather than later. The company, last year, unveiled the Watch Active 2 just days after it showed up on the FCC website. However, it’s tough to say whether a similar ETA will apply this year amidst the pandemic, but we’ll hopefully get some news in the coming days.