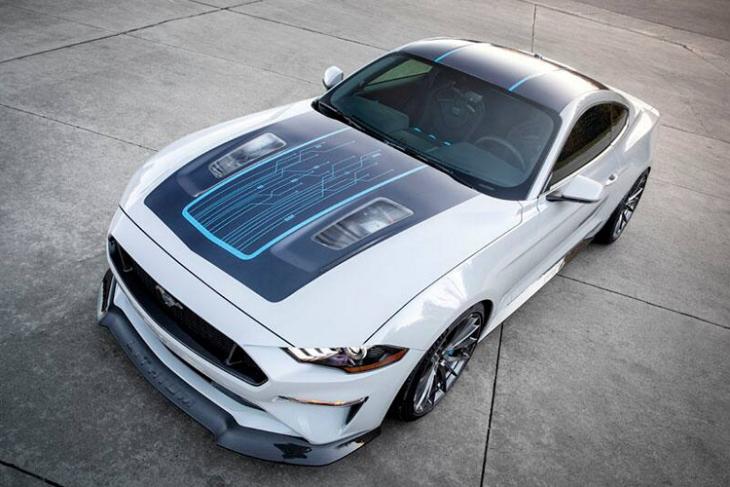 Ford showed off a new Mustang all-electric car prototype earlier this week. Named Mustang Lithium, the car packs everything a car enthusiast would love from a muscle car, with a touch of modernity.

First of all, this all-new Mustang Lithium comes with manual transmission. It uses “drag-strip proven Calimer-version of the Getrag MT82 6-speed transmission” which manages to handle the car’s 1,000 ft.-lbs. of torque.

In terms of performance, the electric car achieves 900 horsepower from its 800-volt Webasto battery system powered by EVDrive technology. The company claims that 800 volts are almost twice the voltage of most currently available electric cars.

There are three driving modes in the car namely Valet, Sport, Track and Beast. All these can be quickly toggled from the 10.4-inch touchscreen display based on the usage scenario. Take a look at a few images of the Mustang Lithium below.

Unfortunately, Ford has no plans to commercialize this manual transmission beast. The Mustang Lithium is a one-off prototype made to be showcased at Specialty Equipment Market Association (SEMA) trade show in Las Vegas.

“This one-off Mustang prototype is a great opportunity for us, together with Webasto, to showcase to our customers what new electrified powertrains can do for performance in a car they already know and love.”, said Hau Thai-Tang, Ford’s Chief Product Development and Purchasing Officer.

I hope Ford changes its plans to at least unveil limited-edition models of this electric muscle car for all the muscle car enthusiasts out there.

However, the American automaker’s mass-market Mustang-inspired all-electric SUV is coming on November 17. I’m excited to know what Ford has to offer in that to compete against the likes of Tesla’s offerings and other EV brands. Are you? Let us know in the comments.