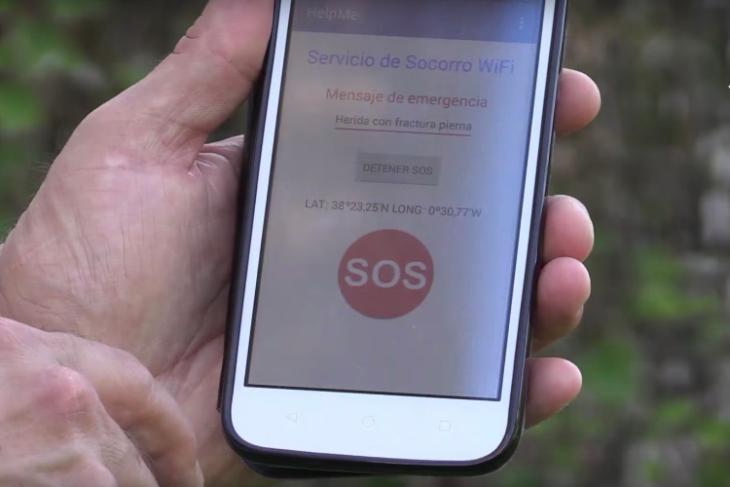 The researchers at Universidad de Alicante (UA) in Spain has created an app which can help find missing people in areas with no mobile coverage. According to a post published on the university’s website,

“The system is also suitable for emergencies due to earthquakes, floods or forest fires, in which mobile phone infrastructure is often damaged and cannot be used.”

The app’s lead creator, UA lecturer José Ángel Berná explains that the app doesn’t need any network connection because it generates a Wi-Fi signal to ask for help within a range of several kilometers. More specifically,

“the signal contains the location (coordinates) of the Smartphone user, who is missing or has had an accident, and a short customized message, such as ‘I am injured’, ‘I am disorientated’ or ‘I need help.”

It basically means that if you are stuck in an area with no network connection, you can still relay your emergency messages using the app. Since the app also sends your GPS coordinates along with your message, rescue teams can pinpoint your location easily. The team has also shared a video which shows the device working in the field.

In order to detect the signal coming from the smartphone, the rescue team will need a portable receptor device which has been also been developed by the university. The device has a small form factor and weighs only half a kilo, in this early stage of development. The device has small antennas and needs to be connected to the rescue teams’ smartphones to detect the signals.

According to Berná, the device has already been field-tested and found to be working perfectly fine. In testing done on both land and water, it was found that the rescue teams were able to detect the signals sent from the app from up to a distance of 2 km and 3 km respectively. The researchers said that although they are happy with the range, they are sure that they will be able to substantially increase in the future.

When it comes to cost, the researchers have said that although no such device exists in the market right now, they are making the device very cheap and will make the receptor available for a steep 600 Euros. But even that price will only be possible if they get large order quantities right now.