Skip to content
Home News DALL-E Mini Is Becoming a Popular Meme Generator; Check It out! 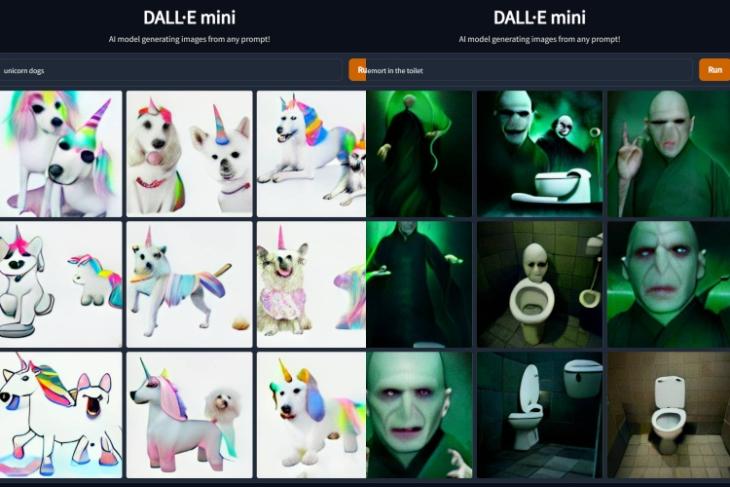 A developer named Boris Dayma, along with his team has built a DALL-E-like text-to-image generation AI tool, dubbed DALL-E Mini, that can turn any text sentences into artistic and quirky images that may or may not make any sense. You can write anything you want in a text box and the tool will churn out relevant images to match it, much like how the original GPT-3-based DALL-E model works.

I tried the tool myself to see how it works and I was surprised by its efficiency. Although it is worth noting that the generated pictures are not accurate and contain intentional smudges and disfigurements to signify that they are AI-generated images and not real ones! You can check out a couple of examples that I tried on DALL-E Mini in the slide attached below.

Now, after Dayma created DALL-E Mini, the tool became pretty popular amongst users who are looking to generate funny images or memes to share on social platforms. The tool is also being used to generate artistic placeholder icons for game items or combine fantasy characters to create a new one. You can find numerous DALL-E Mini images shared by users on platforms like Twitter and Reddit.

According to a recent report, DALL-E Mini has been generating 50,000 images a day after it became popular on social sites. In fact, sometimes the tool cannot generate images due to heavy traffic. Citing this, Dayma has migrated DALL-E Mini to another platform called Craiyon.

You can try out the original tool right here. However, we suggest you learn more about it from its official support page before getting onboard. And if you want to try the new Craiyon tool, find it here. Also, let us know your thoughts on DALL-E Mini in the comments below.