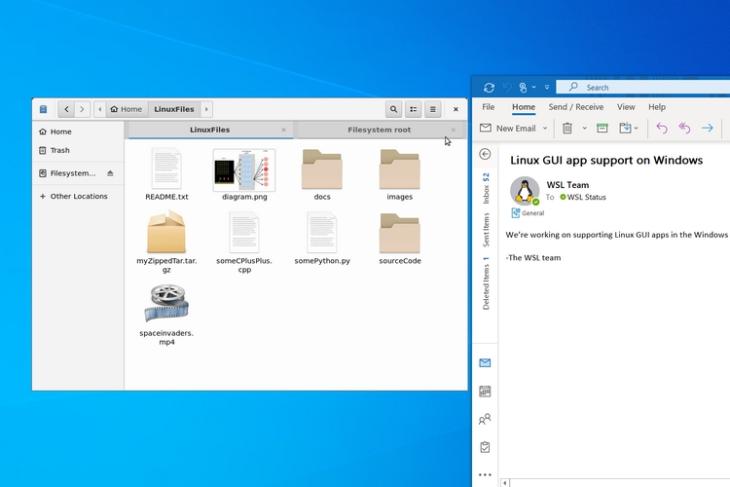 At its Build 2020 developer conference, Microsoft announced plans to add support for Linux GUI apps in Windows 10. With this addition, full-fledged Linux apps will run alongside Windows apps via the Windows Subsystem for Linux (WSL).

“Our goal is for you to be able to run Linux GUI apps on your desktop seamlessly alongside your Windows apps. This will enable you to use Linux apps to edit, build, and run your code, visualize data plots in Python, or even use applications that are optimized for a Linux environment.”, wrote Microsoft’s Craig in a blog post.

Microsoft demonstrated a few sample Linux GUI apps running from WSL such as Eye of Gnome, gedit, and the mpv media player. The apps are connected to a wayland server that is running inside the WSL. They communicate with a remote desktop client on the Windows host.

The ability to run GUI-based Linux apps on Windows 10 with WSL is not really something new. However, developers had to rely on third-party servers such as VcXsrv to achieve this. The process is not only inconvenient, to begin with, but also takes a minor hit on the performance.

The feature is on the WSL’s team roadmap and Microsoft says we could hear more about the progress by Holiday 2020. Another feature in the pipeline is the support for GPU Compute workflows.

GPU Compute workflows enable hardware acceleration with Linux tools. NVIDIA CUDA and DirectML are the first two scenarios that will take advantage of GPU compute support for WSL. Microsoft will roll out this update to Fast ring Insiders in the next few months.