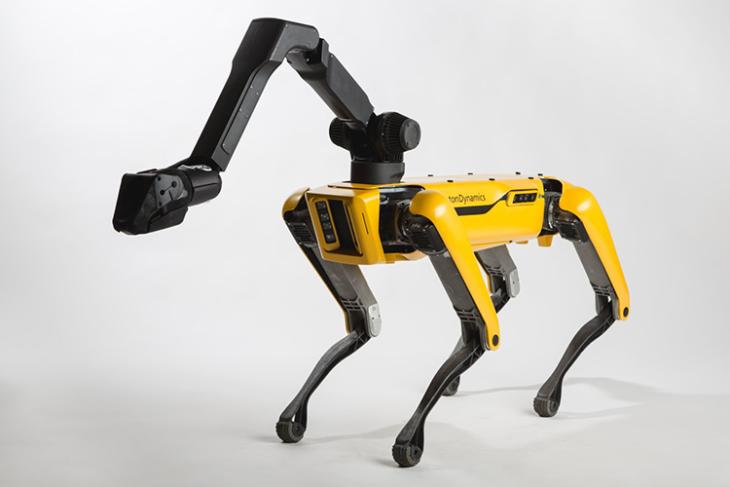 In the recent past, Boston Dynamics‘s humanoid robots have scared, enthralled and fascinated tech enthusiasts in equal measure after videos of them climbing stairs, executing back flips and opening doors went viral on the internet. Now, two new videos released by the company show a couple of its famed robots, Atlas and SpotMini, performing a few neat tricks hitherto unseen by the general public.

The first of the two videos shows the company’s new humanoid robot, Atlas, going for a jog in what looks to be a park on a bright, sunny day. At the end of the 34-second clip, Atlas even jumped over a log with consummate ease. The robot came into limelight earlier when the company uploaded a video of it performing a perfect backflip with the skill of a trained gymnast.

The second video from the company shows another of its famous robots, the dog-like SpotMini, navigating its way through the company’s office, walking down corridors, walking through doorways, and moving up a staircase. While at first glance, it may not seem as interesting as some of its other antics, like opening the door for its friends or fighting off its human handler in an attempt to get away, the fact is, this little trek through the office was immensely significant, because all of that was done autonomously.

“Before the test, the robot is manually driven through the space so it can build a map of the space using visual data from cameras mounted on the front, back and sides of the robot. During the autonomous run, SpotMini uses data from the cameras to localize itself in the map and to detect and avoid obstacles. Once the operator presses ‘Go’ at the beginning of the video, the robot is on its own” – Boston Dynamics

At the ‘TechCruch Sesions: Robotics‘ event Friday, Boston Dynamics founder Marc Raibert also had some exciting news for Boston Dynamics fans. According to Raibert, the company is actually planning to bring the SpotMini to the market next year. There’s no word on the pricing, but expect it to be well out of reach for most of us, because, only 100 units of it will apparently be made this year. Raibert, however, says that the 100 units is only “the prelude to getting them into a higher rate production, which we hope to start about the middle of next year”.