There’s an old joke which goes like this,“If you want to test a man’s patience, give him a slow WiFi connection”. This statement now stands truer than ever, as more and more entertainment services are moving towards streaming. There’s nothing more frustrating than trying to stream your favourite series on Netflix using a slow WiFi connection. The sad thing is that it doesn’t matter which WiFi connection plan you are using, your actual speed will never be same as the plan you are using. There are a lot of factors which impact the network speed. It is here where a WiFi analyzer app will come in real handy. As the name suggests, a WiFi analyzer app will help you to analyse your network and tweak it to an extent, so that you receive the best possible speeds from your network. So, if you are interested, here are the best WiFi analyzer apps you should be using:

We are including the best WiFi analyzer apps for Windows, macOS, Android, as well as iOS.

Note: There are a lot of apps with similar names on the Google Play Store, so do remember to download the apps only from the links provided.

To understand how to use this app and any other similar ones, you need to understand how WiFi works. Your router uses radio frequencies to communicate with your device. These radio frequencies are used in channels which are basically a range of frequencies. Your WiFi router uses a single channel, so does everybody else’s. So, if you are using a WiFi router which is sending the signals on a channel used by other surrounding WiFi networks, your speed will be slow, as there is a limited bandwidth in each channel and the channel bandwidth is being shared among the users. 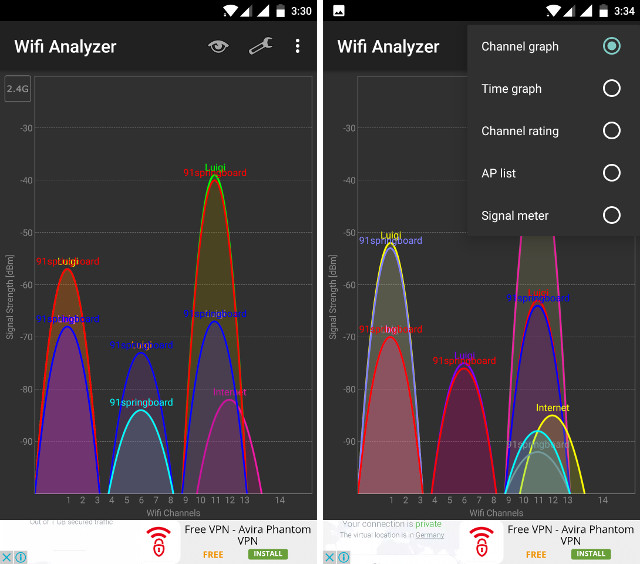 WiFi Analyzer will help you get a visual representation of your network’s channel as well as the best available channel you can use to get the optimum speed. When you launch the app, you will see a graphical representation of all the networks available in the area. The higher the graph, the stronger is the connection. However, this is just a visual representation, to know which channel you should tap on the eye icon and select channel rating. There you will see the list of all the channels with star ratings attached to it. 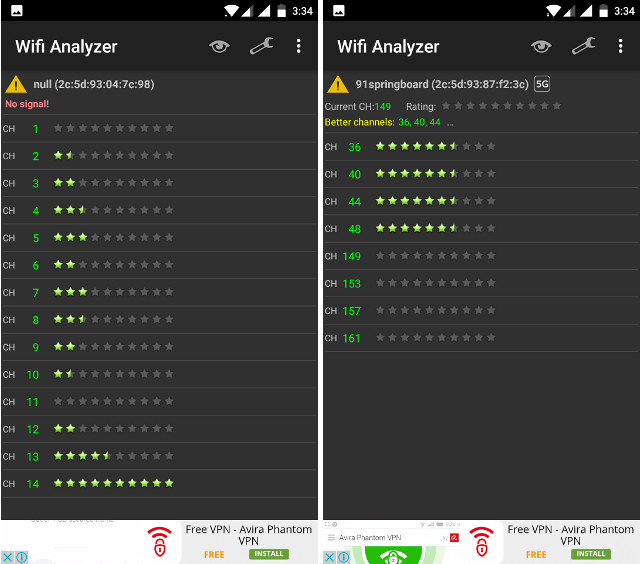 Using the app, you can know what are the best channels for you to use and select your preferences in the router setting accordingly. A very handy app indeed.

If you already know the basics about WiFi channels and are looking for an app which gives you more functions, this one is for you. Also, since this is an open-source app, it is supposed to be more secure than other apps on the list. One thing which will stand out when you open the app is that it’s far well refined than our top picks. Also, unlike our top pick, it also has no ads. The only reason it has been placed on the second place is its complexity. It is much harder to figure out how to utilise this app, than our top pick. For an average user, the first app on the list is more than enough, however, if you are looking for an app which provides you with far more control and information, this one is the best on market. 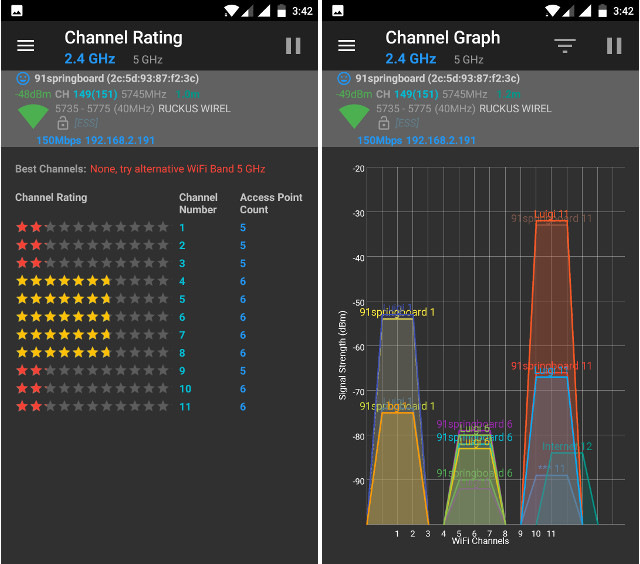 Another good Android app which is really well designed and pack all the required features is NetX. It is the best-looking app among the three. The UI feels modern and responsive. It even identified which device I am using, so that is a plus. You can see all the networks around you in a graph mode or rating mode, whichever meets your needs. The process is the same here. Find out which channel is the least crowded and select that one to get the best speed possible. If you are looking for an app which is powerful and looks good, NetX is certainly for you. 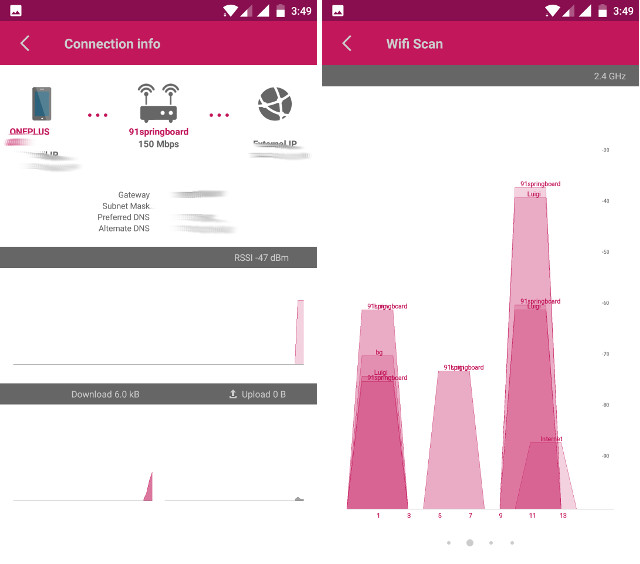 Since iOS does not allow apps to access its WiFi connection chip, there’s only a limited amount of functions that a WiFi analyser app can perform. The best app on iPhone to analyse your WiFi connection is the Network Analyzer. As said in the beginning, due to the limitations put by iOS, the app cannot detect your surrounding WiFi connections and only shows you the details of your own connection. You can also check the upload and download speeds of your network from right within the app. The lite version of the app is free and supported by ads. You have to go Pro to remove the ads. 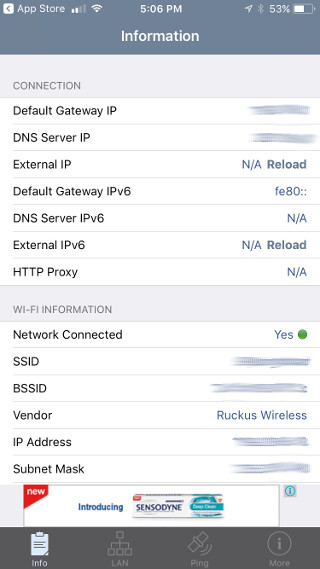 WiFi Commander serves the same function for Windows which the WiFi Analyzer does for Android. It scans your surrounding for WiFi networks and details their signal strength in comparison to your connection. You can see all the data on a very modern looking graph. The app is more powerful than any other apps on this list. You cannot only see the strengths of the network but also can monitor their network speeds. You can see, which channel is used by which connections. This gives you an instant idea as to which channels are most crowded. It packs a ton of information which we do not have the time to cover here. You should install the app to uncover all its features. If you are looking for a full-fledged desktop app, this is the best you can get for your Windows machine. 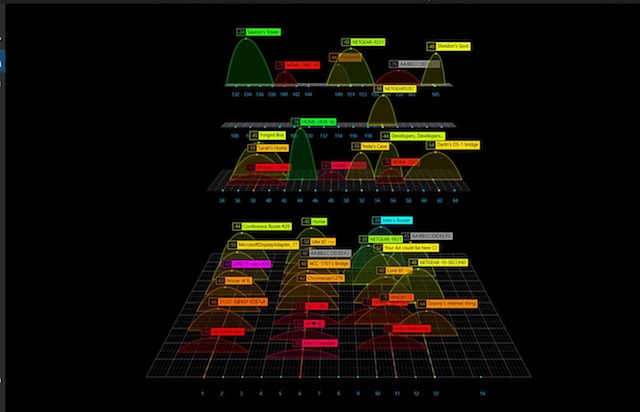 NetSpot is more than just a WiFi analyzer app. Using this app, you can conduct the survey of your home or office premises to understand which spots are receiving the weakest WiFi connection. This is a professional level tool developed to meet the needs of a large office area or your home. It has a free version which only allows you to scan for the surrounding networks and shows the strength of each network. For conducting the survey of your home or office premises, you need to but the pro plans. The Pro plans allow you to upload the blueprint of your building and then maps the WiFi connection to the areas predefined be you. 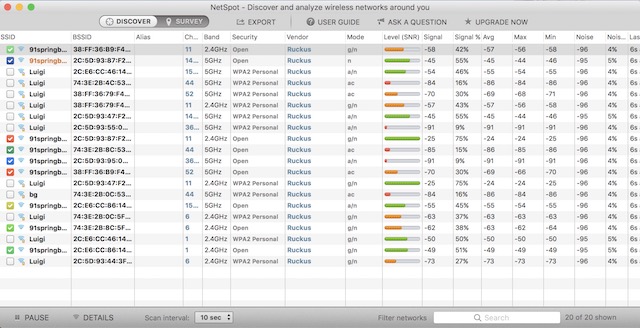 It uses colour coding to show which areas are receiving what level of signal strength. For example, the blue and purple areas depict a lower level of WiFi connection strengths. As mentioned earlier, this software is not meant to be used for personal usage, unless you own a big house which needs WiFi mapping. This one is best suitable for businesses needing to enhance the WiFi connectivity throughout their office. 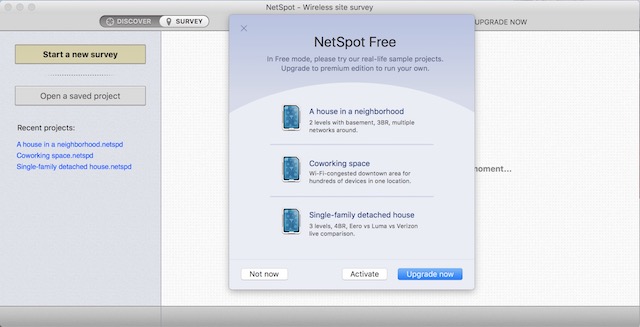 WiFi Analyzer for Windows is basically the same as the one for Android. Although both the apps share the name, they are not made by the same developer. If you use a Windows device and need an app which is as simple to use as our top pick, this is the one for you. You can see the surrounding network in easy to understand graph. In the Ratings section, you can see the ratings of all the available channels. You can switch to the best possible channel for your network accordingly. It is a simple app for Windows which helps you in choosing the best channel, so that you receive the optimum connection speed. 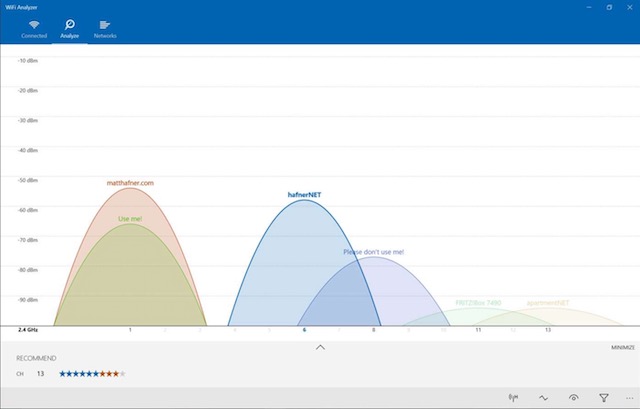 InSSIDer is a very powerful WiFi analyzer tool. When it comes to sheer functionality, it might be the best among all the apps we have covered. Not only it uses the data from channels it uses an external tool called WiSpy which can detect all of the raw radio frequency activities, which allows you to see exactly how busy each channel is. Based on the data, with a single click, it suggests you which channel is the best to utilise. The only reason InSSIDer has been placed in the bonus section because as of June 26, 2017, they have stopped selling the personal version of the software and are only selling the Office version. Its Office version competes directly with the NetSpot app. So, if you are looking for a software for your office, try both before you make the purchase decision. 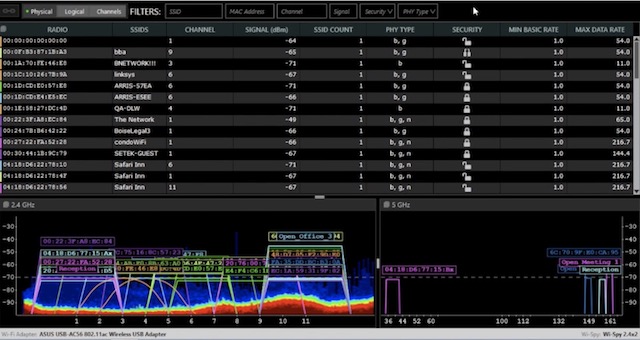 SEE ALSO: How to Prioritise WiFi Network On Mac And iPhone

With every WiFi connection surrounding you fighting for the same bandwidth space, your network speed may suffer. Use the above apps to analyse your WiFi connections and select the channels which are least crowded to get the best possible speeds on your smartphone or computer. Utilising these apps is as important as buying a high-speed plan and a good router. So what are you waiting for, download these best WiFi analyzer apps and configure your WiFi connection now. Let us know in the comment section about the boost you received in your network speed.