Online security has become a hot topic in the recent months especially after the Facebook data breach scandal which shocked the whole world. If you still are not doing anything to protect your online identity, you are doing something very wrong. One of the best ways to protect our identity online is by using virtual private networks or VPNs. VPNs help us keep our identity hidden while surfing the internet by masking our private IP address, blocking the online trackers, and encrypting our data. They also give us access to geo-restricted content on the internet.

Considering the fact that most of us spend more time on our mobile devices than ever before, it’s important that we use VPN while using our smartphones. Since Android is the most popular smartphone operating system in this world, we thought to list the best VPN services for Android which can help Android users protect their identity online. If you are an Android user, you don’t want to miss this article where we bring the 10 best Android VPN apps which you can use in 2018.

What to Look for in a Good VPN Service?

Before we get into the list, let us first talk briefly about the things that you should look for in a good VPN service. Although, there are a lot of factors which determine if a VPN service is good for you or not, there are a few things that you should certainly look at. Firstly, you should see if the VPN you are using is encrypting your data or not. Then you should see if the VPN is keeping a log of your browsing history or not. The last is the location of the company that is operating the VPN.

So, as a rule of thumb, you perfect VPN provider should be encrypting all your data, shouldn’t be keeping a log of your activities, and also not be based in a country where the government cannot easily get access to the company’s data (read Russia, China, North Korea). Okay, updated with this little nugget of wisdom, let us check out the best VPN apps for Android:

NordVPN is one of the best VPN services that you can get for your Android device as it fulfills all the major criteria that we discussed above. Firstly, the company encrypts all your data. Secondly, the company clearly mentions that it doesn’t keep a log of your browsing data. Lastly, the company is based in Panama which is a heaven of privacy guys. With NordVPN you can be sure that your data is encrypted and safe. 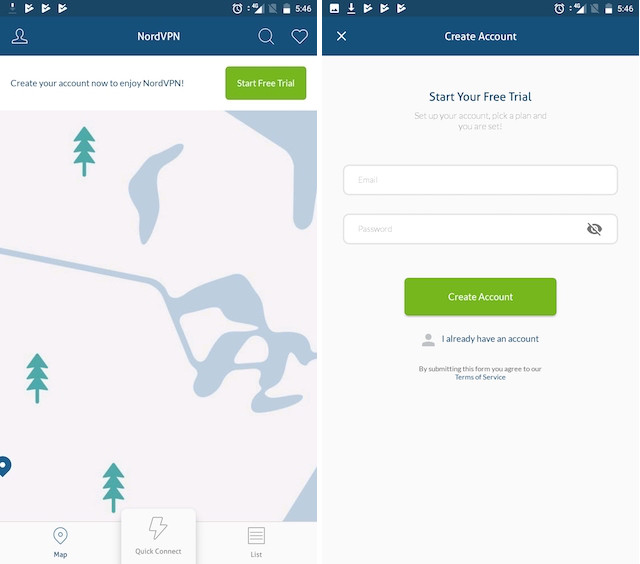 Another benefit of using NordVPN is that with a single premium account, you can secure up to 6 devices which can include Android, iOS, macOS, and Windows devices. NordVPN also brings very fast connection speeds thanks to its worldwide server locations. As of April 2018, the company runs over 4,000 remote servers in 62 countries, with the largest numbers of servers located in United States, United Kingdom, Canada, Netherlands, Germany, Australia, France, and Sweden.

ProtonVPN is a VPN service which focuses on user’s privacy. Not only the company encrypts user data but it also takes extra precaution by first passing user traffic through their Secure Core network in privacy-friendly countries like Switzerland and Iceland, and then redirect it to the countries where the user wants to connect to. The company operates 112 remote servers in 14 different countries which includes countries like USA, Canada, Australia, United Kingdom, Hong Kong, and more. 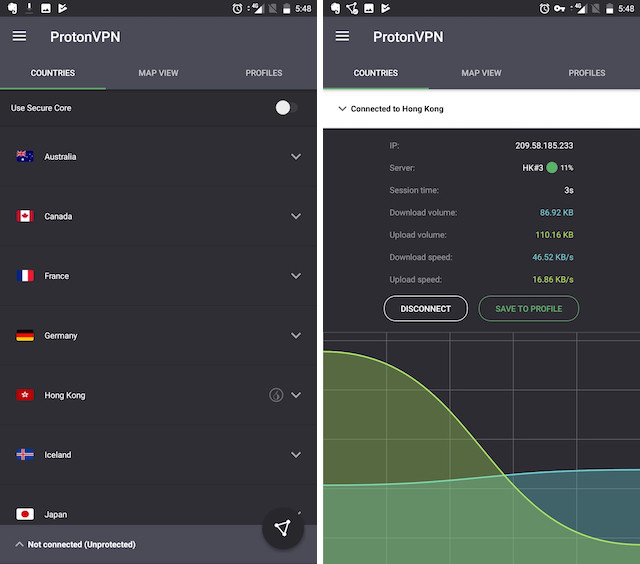 The company itself is based in Switzerland a country with some of the strictest privacy laws in the world and doesn’t keep a log of user’s browsing history. One extra feature of ProtonVPN is that it also integrates with the Tor anonymity network allowing users to access Onion sites with just one click.

IVPN is one of my most favorite VPN apps on this list. The app is very easy to use and checks all the security boxes. IVPN never tracks personal information or logs user’s online activity. It also automatically blocks all known privacy leaks including recently discovered IPv6, DNS and disconnection leaks, and even disables WebRTC. IVPN also uses state of art security standard for data encryption. The service uses AES-256 encryption with 4096-bit RSA keys. Also, new encryption keys are generated every hour providing perfect forward secrecy. 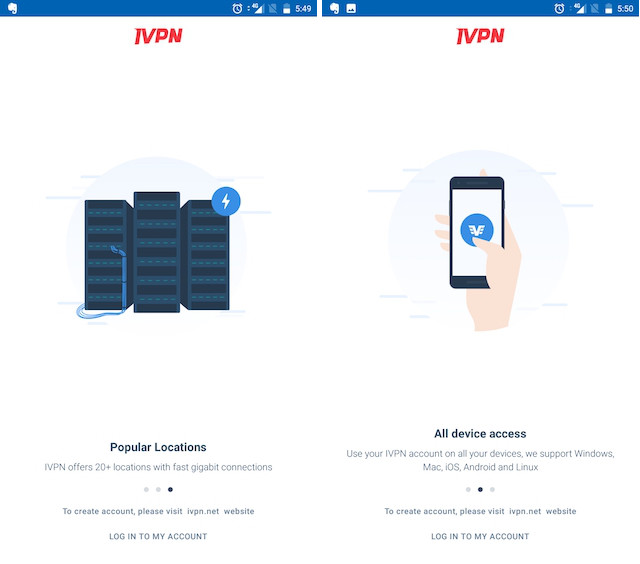 IVPN is very easy to use and supports one tap connection. The service also ensures that its users are getting the highest possible speeds with its network of servers around the world covering countries like USA, United Kingdom, Spain, France, Italy, and more. Basically, IVPN is one of the fastest and best VPN services for any privacy concerned user out there.

Betternet VPN like any other VPN helps you access blocked website and region-locked content by routing your IP address. The service also encrypts your connection, masks your IP address, changes your location, and gives you privacy and anonymity online. It is also one of the few VPN services which are completely free and even doesn’t show you any ads. What’s best is that the company is totally open about how they make the money to run the VPN service. They do it by offering free app suggestions and showing a video before you connect to their servers. 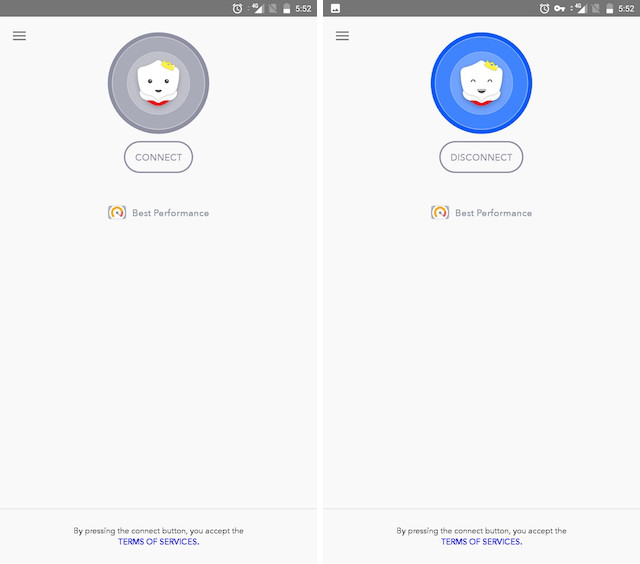 That said, Betternet VPN has very limited number of servers around the world which only cover the following countries; USA, United Kingdom, Canada, Netherlands, Germany, and Japan. If you don’t live in or near these countries, your connection speed is going going to suffer. There is a premium version for anyone who wants extra features and wants to support their effort to provide free quality VPN for everyone.

TunnelBear is one of the most popular VPN services out there and that’s for a reason. The service provided by TunnelBear is fast, secure, and reliable. The service also releases a yearly independently audited report every year which is a testament to their commitment to user privacy security. I personally love TunnelBear because it makes it really easy to connect to VPN and also brings very high network speed. The faster network speed is possible thanks to its worldwide servers which span 20 countries including United Kingdom, Germany, Spain, the Netherlands, United States, Canada, Hong Kong, Singapore, India, and Japan among others. 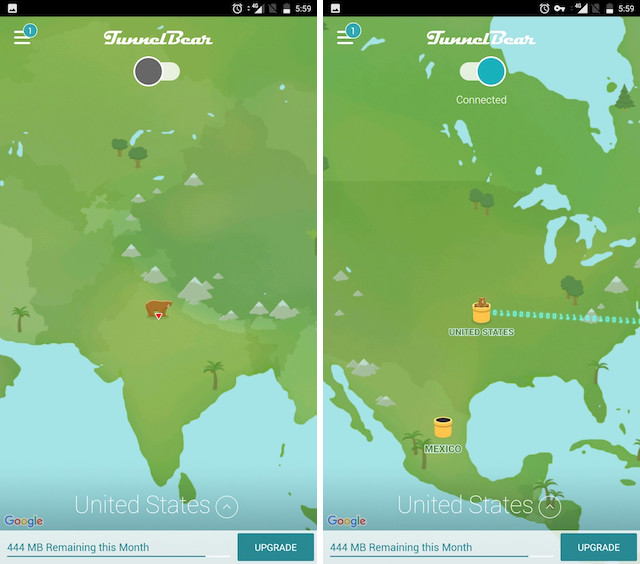 I would have kept TunnelBear a bit higher up the list if not for the fact that it was acquired by McAfee a few weeks back and we are still not clear how it will affect the service’s records. However, acquisition aside, TunnelBear has proven itself to be a very competent VPN service and I have no qualms in recommending this one.

Windscribe is also a very good VPN service which allows you to unlock geo-restricted content and browse the web privately. The service encrypts your browsing activity, blocks ads, and stops online trackers from tracking yours across websites. One of the best parts about using Windscribe is that it neither records your browsing data and nor leaks your DNS information. Windscribe is also very easy to use allowing users to connect to its service with just one tap. 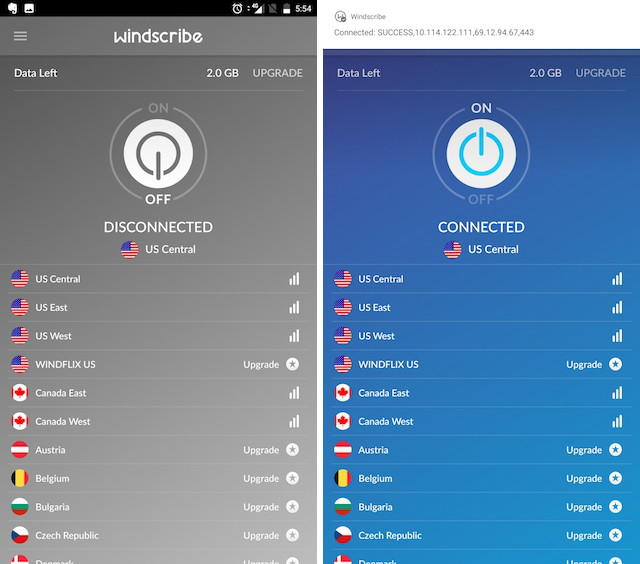 Windscribe also offers one of the largest server coverage of all the VPN services. At the time of writing this article, Windscribe has servers covering 100 cities in 52 countries across the globe which is excellent for network speeds. An extra feature of Windscribe is that it prevents hackers from stealing your data while you use public WiFi by securing the connection. If you are looking for a good VPN service for your Android device, this is one of the best in the market.

ExpressVPN is one of the most premium VPN services out there. The service has servers in 94 countries allowing users to quickly connect to VPN. The service encrypts user data to safeguard them against hackers and online trackers. One of the best things about ExpressVPN is that it is based in the British Virgin Islands, a place without any data retention laws. What this means is that ExpressVPN is not required to log your activity and connection. You can basically take your browsing history to your grave. 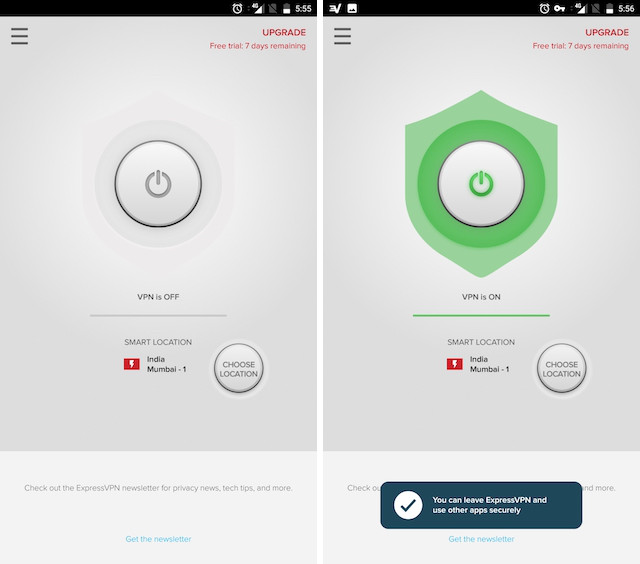 One of things about ExpressVPN that amazed me was the fact that ExpressVPN has servers which span 148 locations in more than 94 countries of the world. This means that no matter which country you reside in, you will have an ExpressVPN server nearby to provide you with good network speed. Other awesome fathers include 256-bit AES encryption, DNS/IPv6 leak protection, kill switch, and split tunneling.

AirVPN is a VPN created by activists and hacktivists around the world and focuses only on the privacy of users. This is great for someone who doesn’t want to trust their data with private VPN companies and want a service which is open and secure. If that’s you, AirVPN is just the right VPN service for you. AirVPN encrypts users’ data using Diffie-Hellman key exchange DHE, hides their IP addresses, doesn’t monitor or log user activities, and makes it impossible for anyone to identify the type of traffic or protocol you are using. 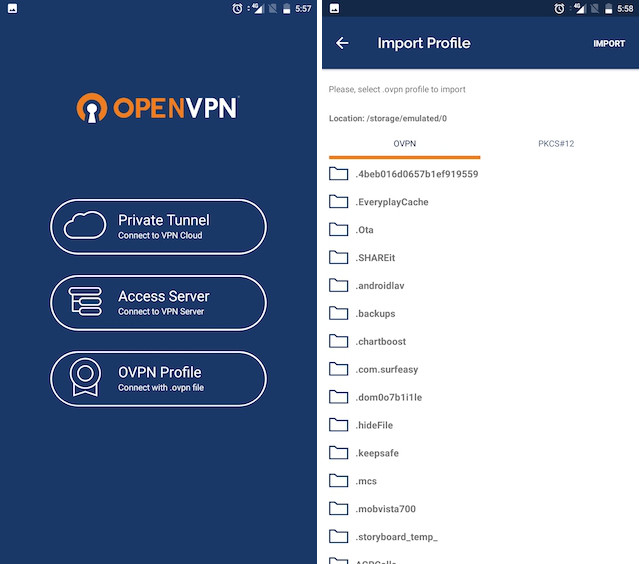 AirVPN also has a very respectable server coverage around the globe and covers more than 50 locations in 15 countries across the globe. The only problem with using AirVPN is that it doesn’t have a dedicated Android app and you will have to use a third-party VPN client to use it. You can read all about how to do that by clicking here.

Private Internet Access VPN is another great VPN service that you can use on your Android device. The service lets users browse anonymously with a hidden IM, and enables wifi security with their VPN service. It provides state of the art multi-layered security with advanced privacy protection using VPN tunneling. The service is also very easy to use and allows users to establish one-click connection. The connection speeds are also really good as the service has 3041 bare metal servers in 45 locations across 28 countries. 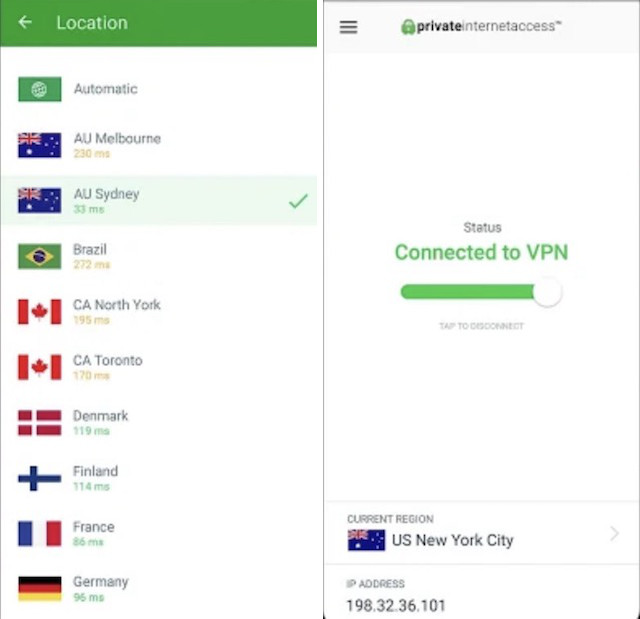 Hideman VPN is a very easy to use VPN service which gives you access to content geo-restricted in more than 24 countries. The service encrypts personal data and hides users real IP address thereby protecting online privacy. Just like ProtonVPN, the Hideman VPN also allows users to easily access .onion and .i2p resources without additional configuration. You can also use the service to easily download torrents without penalties or restrictions. Lastly, the service is available in more than 20 countries around the wold including USA, Spain, France, Germany, Ukraine, Panama, and more. 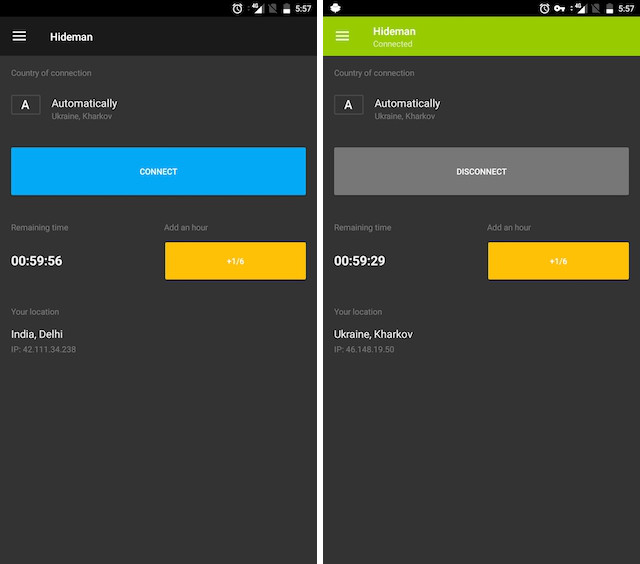 Which Android VPN app are you going to use?

I hope that you the list helped you in finding the VPN app for your Android device. Most of the services that are mentioned here offer a restricted free tier which you can use to take check them out before you invest in them. Also, if you are already using a service and are happy with it, do share its name in the comments section below.