It doesn’t matter how careful you are with your PC, the fact is now there are so many avenues of your PC getting attacked with malware that sooner or later you are going to get attacked. Whether it happens due to someone else’s fault or a fault of your own, if your PC is attacked with a malware, it will be you who will suffer. If you have been paying attention to the news lately, you might have heard about the WannaCry ransomware, which became really popular as it attacked thousands of PCs across the world.

Before you say that you are not so stupid to get attacked by a malware, I will tell you that everyone says that until it happens. You really don’t want to risk it when it comes to protecting your PC from malware. So, before it’s too late, check out our list of best malware removal tools which not only protect your PC against malware but also helps remove them if your PC is already affected.

Whenever you think of protection from malware, Malwarebytes is probably the first software that will come to your mind. And that is not because they invest too much money marketing their software rather it’s because their product is actually really good. The best part about using Malwarebytes is that it just gives you a one-click solution. You click to scan and the software will automatically neutralize any and all malware that it finds during the scan. 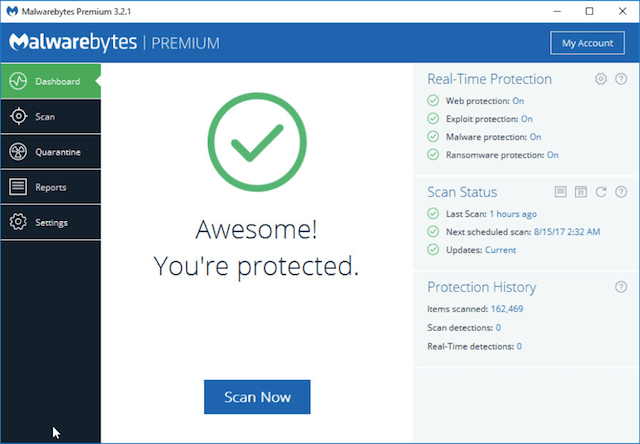 The discovered malware is safely kept inside a quarantine, where you can manually check them and delete them. Malwarebytes is my favorite tool when it comes to removing malware from your PCs. But how about protecting your PC against malware in the first place. Well, if you buy the premium version of the software, it will protect your PC against exploit attacks, ransomware attacks, and prevents access to and from known malicious websites. This is one of the best tools you can own to protect your PC against malware.

Another great anti-malware tool is the Bitdefender Internet security which protects your Windows PC from any malware attacks which can happen over the internet. The software not only packs multi-layer ransomware protection to keep your files safe, it also brings better privacy by safeguarding your webcam against any unauthorized hacker attacks. 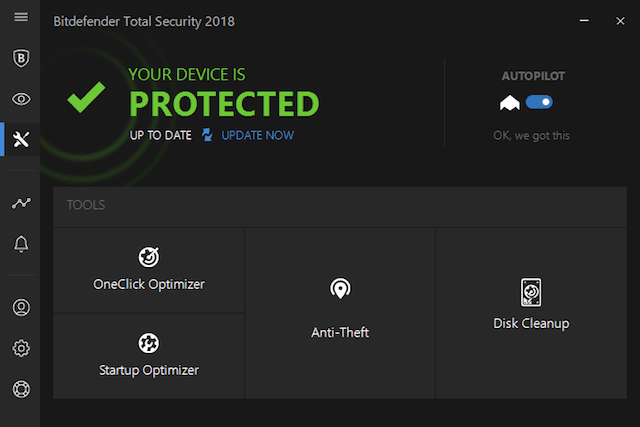 The service also brings a Bitdefender VPN which allows you to surf the web without giving your identity to thousands of invisible trackers which track your every movement and deliver you targeted ads. Sometimes attackers infect these ads with malware as they know that it will have a higher chance of getting clicked on based on your past browsing history. If you want to protect your PC against any kind of online malware attacks, do give Bitdefender Internet Security a chance.

Avira is one of the best malware protection service that you can use for protection against malware attacks. The best part about using Avira is that even its free version provides you with enough protection to fend off most of the malware attacks. Avira’s antivirus is powered by a combination of artificial intelligence, cloud technologies, and their endpoint antivirus scanner which works in tandem to protect your PC against all types of malware including ransomware, Trojans, and spyware. 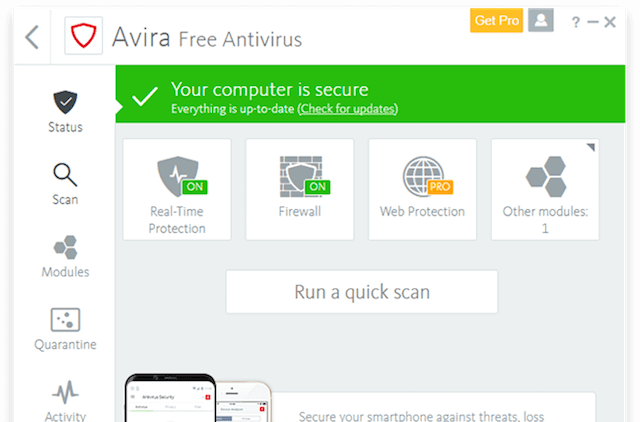 One of the biggest features of Avira protection suit is their Protection Cloud which is an early warning system, which analyzes unknown files in the cloud anonymously from millions of users, to protect you from threats as they emerge in real time. If you get the full Avira Security Suite, apart from the Avira antivirus, you will also be getting a free VPN, a firewall protection, and more.

Kaspersky is a well-known security company especially when it comes to the security of Windows operating system and their new Internet Security tool for Windows is enough to protect your PC against any sort of malware attacks. The software is really easy to set up and doesn’t require any technical know-how from your side. Once you set it up, it will automatically protect your PC against viruses, spyware, phishing and other kinds of malware attacks. 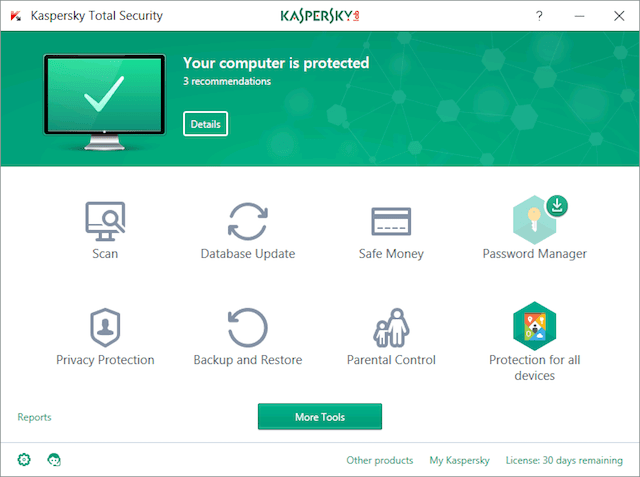 The best part about Kaspersky Internet Security is that it knows when you are performing sensitive actions such as baking or payments and takes extra steps to secure your connection so that your financial data is never hacked and obtained by anyone. It is one of the safest internet security tools you can use against malware and you should definitely check this one out.

Another great service which is known for its internet security tools is Avast. Avast internet security saves your PC from malware by using a combination of prevention, protection, and privacy features. Firstly, the service prevents attacks by utilizing its firewall which not only keeps malicious files out but also filters out spam content and malicious websites. 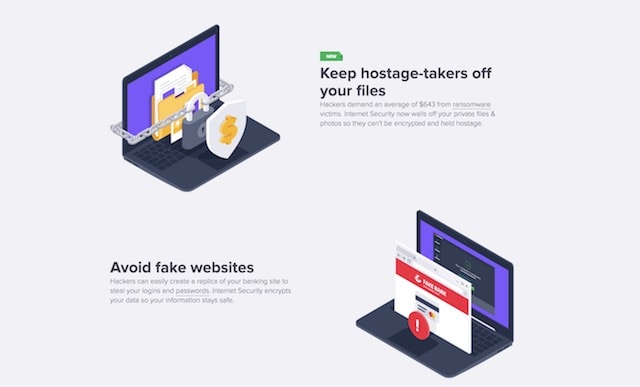 Secondly, it’s intelligent antivirus scan detects and blocks viruses, malware, spyware, ransomware, and phishing. Like Avira, Avast also has a CyberCapture system which automatically sends suspicious files for analysis in the cloud, thereby updating its database against malware in real-time. Avast has also recently added extra protection against ransomware which blocks ransomware and other untrusted apps from changing, deleting, or encrypting your personal photos and files.

Emsisoft is another great company which makes really advance anti-malware software. The software comes with a unique dual-engine malware scanner which provides four layers of protection against all kinds of malware including ransomware, trojans, bots, backdoors, and more. The software also keeps your PC fast be removing potentially unwanted programs that mess up your computer with useless browser toolbars, tons of commercials, and other bulk that slows down the PC. 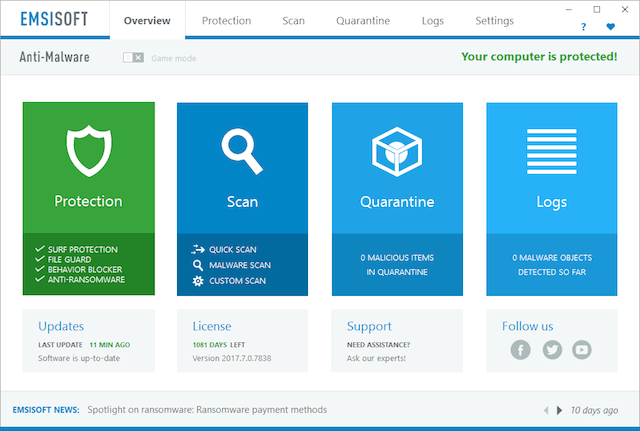 Other features include advance cleaning and restoration capabilities, easy to navigate and use user interface, extended logs to keep track of past actions, ultra-fast malware scans, hourly updates to keep track of new threats, and more. The bottom line is that Emsisoft Anti-Malware program can provide a 360-degree protection against malware attacks.

Webroot Smarter Cybersecurity is not that well known among normal Windows users but it is an excellent anti-malware service that will protect your PC against any kind of malware attacks. Their internet Security Plus package offers cloud-based protection that stops threats in real time and secures businesses and individuals wherever they connect. The software not only protects you against malware attacks but also encrypts your passwords, usernames, and credit card numbers to safeguard yourself against any financial attacks. It is one of the best anti-malware protection tool that you can use to keep yourself safe. 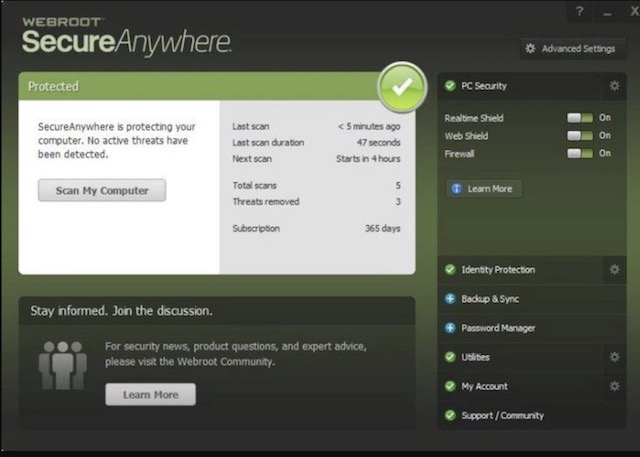 Norton is yet another well-known company in the security space. It’s Norton Security Deluxe package provides real-time protection against existing and emerging malware including ransomware and viruses. The built-in advance security ensures that your private and financial information is protected whenever you go online. I also like that the service provides a security expert as soon as you subscribe to their service. If you have any problem, you can directly connect to your personal security expert which can be great for people who have no idea what kinds of malware they are dealing with. Their basic pack starts at a price as low as $19.99 and goes up to $49.99. You can click on the link below to compare and purchase the package that you like. 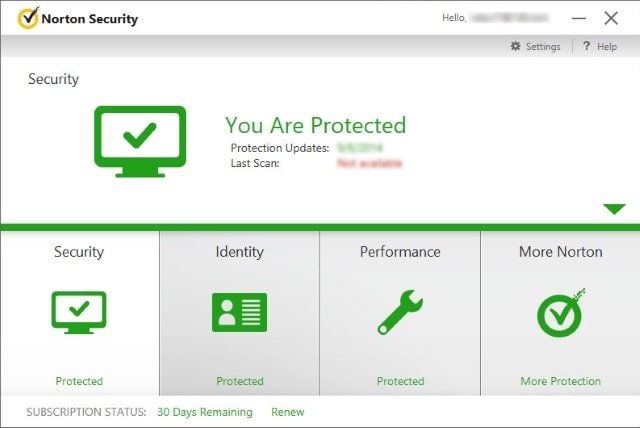 One of the security services that has become really popular in the past is the Adware antivirus. The Adaware antivirus pro provides a complete line-of-defense against hackers, cyber threats, and malware. Their revolutionary threat detection is powered by advanced anti-malware technology that will block and eliminate any threats to your PC. The best part about using Adware is that it also comes with a free version allowing users who cannot afford antivirus, a chance at protecting themselves against malware attacks. 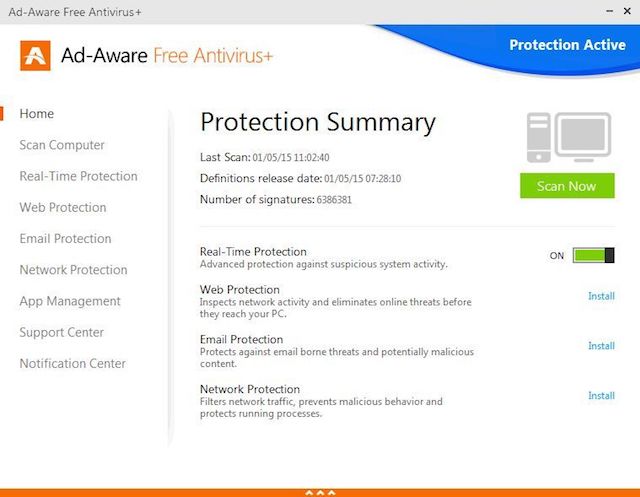 The last anti-malware software on our list is the SUPERAntiSpyware, which also comes with a free and pro version. The software helps is detecting and removing spyware, adware, malware, Trojans, dialers, worms, keyloggers, hijackers, parasites, rootkits, rogue security products, and many other types of threats. The software is also very light on resources which ensures that even when it’s working in the background, your PC is not taking any noticeable performance hits. Other features include scan scheduling, e-mail notifications, real-time blocking, and more. 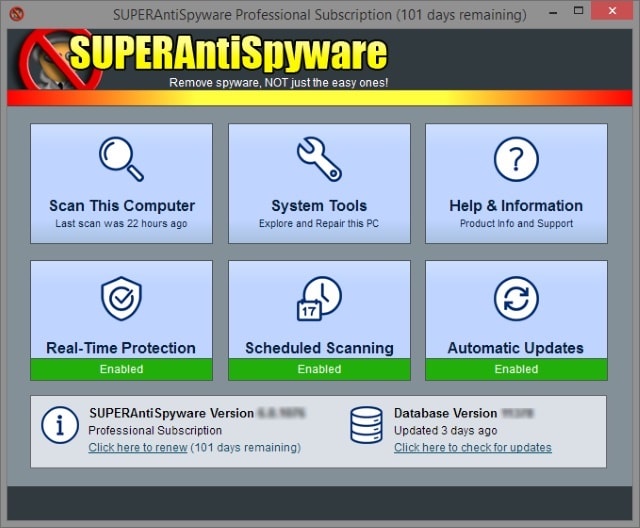 Protect Your PC Against Malware with the Best Malware Removal Tools

We are living in a world which is seeing an exponential increase in digital crimes. Don’t let your ego make you vulnerable to these attacks. Download and install these free and paid anti-malware software to protect your PC against those attacks. Check them all out and do let us know which one is your favorite amongst them all. 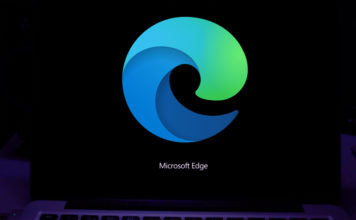 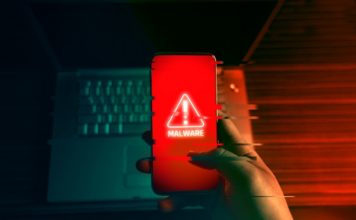 Back in 2017, the Indian Computer Emergency Response Team (CERT-IN) discovered the existence of GravityRAT spyware. The spyware, believed to be operated by Pakistani...
Subin B - Oct 21, 2020 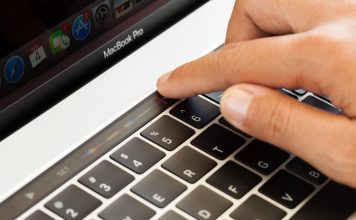 Apple had apparently unwittingly approved a common malware to run on macOS. That's according to a new report from cyber-security researchers, Patrick Wardle and...
Kishalaya Kundu - Sep 1, 2020 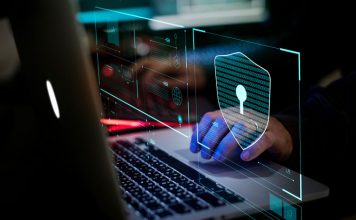 The US Federal Bureau of Investigation (FBI) and Cybersecurity and Infrastructure Security Agency (CISA) have claimed that North Korean state-sponsored hackers are using a...
Kishalaya Kundu - Aug 20, 2020 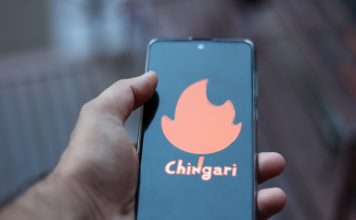 Another day, another news about a possibly dodgy app. And truth be told, none of us can claim to be truly surprised, either. In...
Kishalaya Kundu - Jul 2, 2020