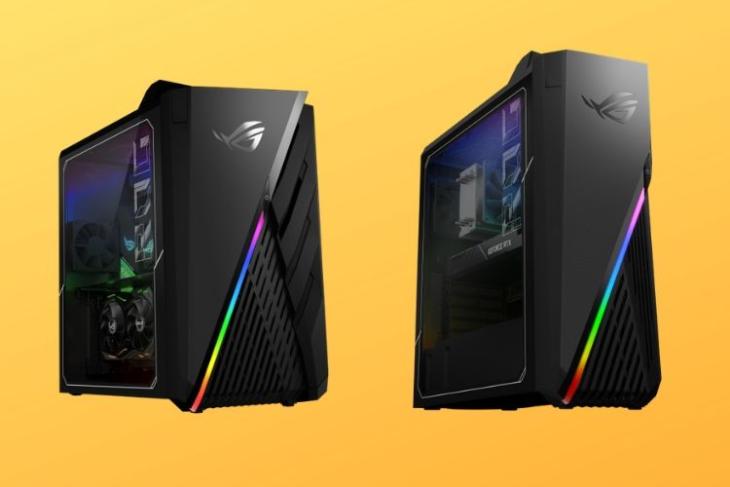 With CES 2020 now in full swing in Las Vegas, Asus has decided to kick-off the show with the unveiling of its newest gaming desktop lineup. The company has taken the wraps off the ROG Strix G15, a powerful desktop for everyday gamers, and ROG Strix G35, a more versatile machine that’s also e-sports ready. These gaming desktops are available in two configurations, one with the latest Ryzen 3000-series processor and other with 10th-Gen Intel Core processors.

Starting off with the ROG Strix G35 gaming desktops, Asus calls them tournament-ready and they weigh around 15 kgs. The chassis has a carrying handle up-top to make it easy for gamers to carry around the rigs – if need be. It can bear a sustained force of up to 30 kgs.

This gaming desktop comes baked with two hot-swap drive bays, which remain hidden behind a spring-loaded door. This enables users to instantly load their games and profiles without having to pry open the chassis. There’s also a dedicated headphone hook on the front. 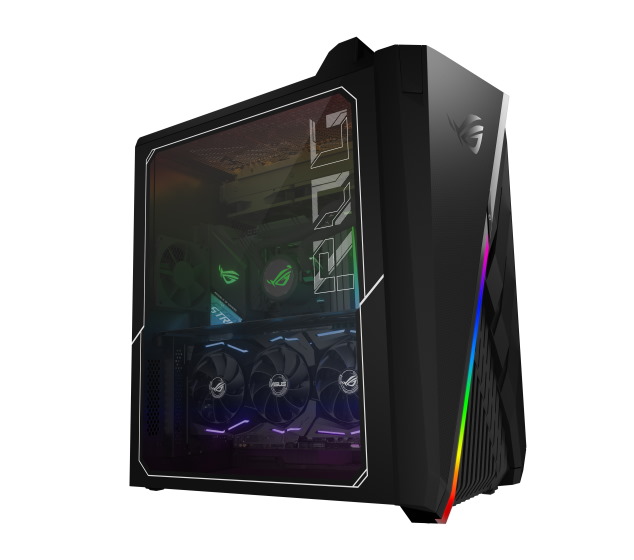 ROG Strix G35 packs some serious power to make it desirable to both gamers, streamers, developers, and content creators alike. The ROG Strix GA35 is powered by up to a 16-core AMD Ryzen 9 3950X CPU whereas the GT35 (which will launch later) will be backed by the latest 10th-Gen Intel Core processors. Yes, the G35 will be available in two different configurations, along with the ROG Strix X570-F Gaming motherboard, 64GB of RAM, and up to 1TB of M.2 NVMe PCIe SSD storage.

Note: To make it simpler for consumers to differentiate among its products, Asus is simplifying the naming scheme with its new ROG Strix gaming desktops. They come baked with either AMD Ryzen or Intel Core processors. The desktops that include the AMD chipset will be referred to as GA while those with Intel processors will now be identified with the ‘T” in their name, such as ROG Strix GT35.

The CPU onboard is coupled with an ROG STRIX GeForce RTX 2080 Ti graphics card, which comes with a 2.7-slot heatsink and 3 axial-tech fans to maintain high clock speeds. Asus claims that you can push the desktop to enjoy Overwatch at up to 188fps at 4K with Epic details, which sounds bonkers.

ROG Strix GA35 and GT35 features a closed-loop liquid cooling system, dual-fan radiator for upwards heat ventilation, and support for Aura Sync and the second-gen Keystone. It also includes a host of ports – two USB 3.2 Gen 2 Type-C ports, 2 USB 3.2 Gen 1 Type-A ports, and a headphone jack on the front. You get 1 USB 3.2 Gen 2 Type-C port, 2 HDMI 2.0b ports, DisplayPort 1.4, and a Gigabit Ethernet port on the rear.

While the ROG Strix G35 is designed for e-sports tournaments, the Strix G15 appears to have been designed for daily use, game streaming, content creation and more. It can be seen as an affordable variant of the G35. The chassis looks more or less the same but it features an EMI-shielded glass panel on the side to showcase the internal components – most of which are RGB-lit and backed by Aura Sync. Asus is offering its users extensive personalization options with this gaming machine. 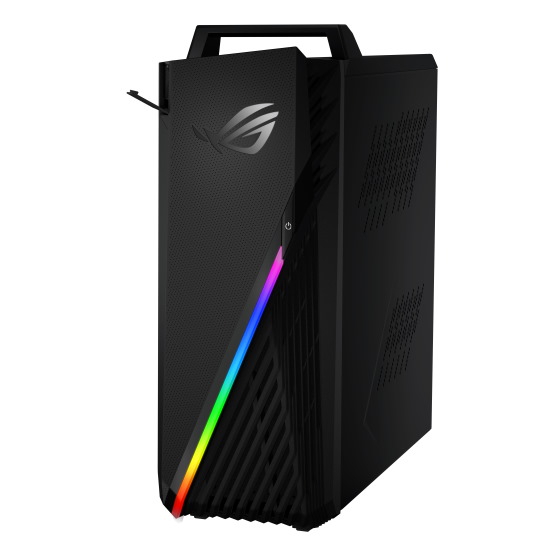 As for what’s under the hood, the ROG Strix GA15 and GT15 use the latest 3rd-Gen AMD Ryzen 3000 CPUs (up to Ryzen 7 3800X with 8 cores and 16 threads) and upcoming 10th Gen Intel Core processors respectively. The new Ryzen chips are based on the new 7nm architecture to make the machine more cost- and power-efficient.

The CPU onboard has been paired with up to 32GB of RAM, up to 1TB of M.2 NVMe PCIe SSD storage or up to 2TB of HDD storage. You can configure these gaming desktops with up to NVIDIA GeForce RTX 2070 SUPER graphics card for an amazing gaming experience. You will get the same collection of ports on the GA15/GT15 as its high-end sibling, we’ve just discussed above.

Asus has currently only shared with us the complete specs sheet for both the ROG Strix G15 and G35 gaming desktop. It is yet to announce the price and availability details for these desktops, so stay tuned as we will update this story with the same.