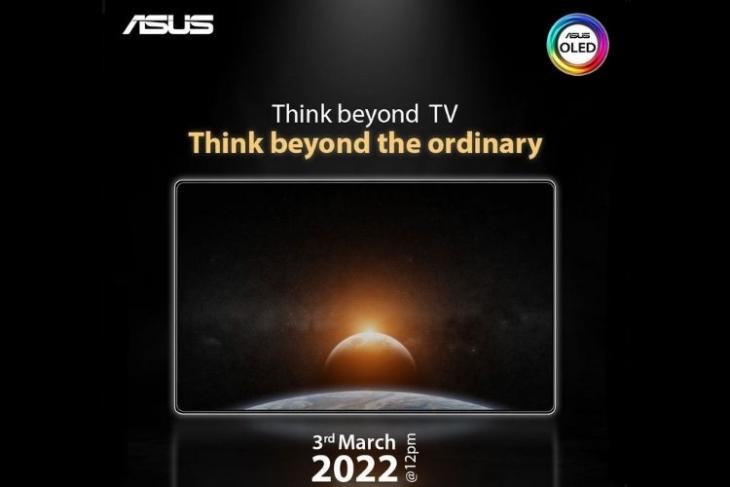 Asus is all set to launch its first OLED TV in India on March 3, for which the company has started a new “#WhoWatchesTV” campaign. This new age OLED TV is said to change the way a user watches TV, and from what we can make out from the teasers, it appears to be a portable TV solution.

In an official tweet, Asus has confirmed that it will launch a new OLED TV on March 3 at 12 noon, most likely via an online event. The tweet includes a short video for the “#WhoWatchesTV” campaign, based on how Indians react when their TV experience is interrupted, and raises the question, “who watches TV?”

The campaign involves creators such as Funcho, Anam Darbar, Abhishek Nigam, and Arifsha Khan. With this campaign, Asus seems to be focusing on the portable TV part, which will allow users to watch TV anywhere. With the launch, TV is “never going to be the same again!” So, we can either expect it to be a different take on an OLED TV.

Talking about the campaign, Arnold Su, Business Head, Consumer and Gaming PC, System Business Group, ASUS India, said, “TV has always been the core source of entertainment for all of us. We at ASUS believe in constantly revamping consumers’ experience through our innovation and allowing consumers to do what they love more innovatively. Our latest campaign #WhoWatchesTV celebrates the emotional relationship we hold with our television, it’s more of a companion and we want it to resonate with all age groups.”

However, details on the upcoming Asus product haven’t been unveiled yet. Hence, we need to wait until March 3, which is two days away, to get a proper idea of how special this OLED TV from Asus could be. It shall be interesting to see what the device is like, after all.

In related news, Asus recently launched the Asus 8z smartphone in India. It is the rebranded ZenFone 8 that was launched globally last year. The smartphone has a compact design and comes with a 5.9-inch Full-HD+ E4 AMOLED display with a 120Hz refresh rate, a touch sampling rate of 240Hz, 1100 nits of peak brightness, and Corning Gorilla Glass Victus. It is powered by the Snapdragon 888 chipset with 8GB of RAM and 128GB of storage.