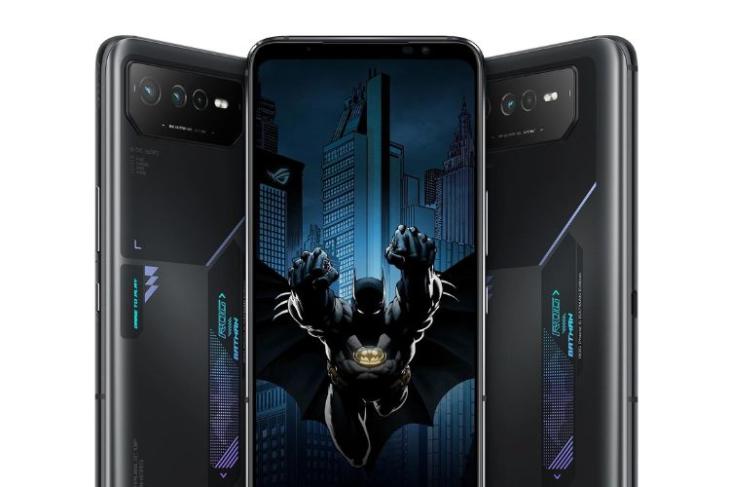 Asus launched its latest gaming-centric flagship smartphones, ROG Phone 6 and 6 Pro, back in July this year. And apart from the high-end specs, these phones bring one of the best gamer-esque designs with a color screen on the rear. But, Asus isn’t done yet! The Taiwanese giant is now looking to launch a special edition variant of the ROG Phone 6 with a Batman theme. Let’s look at all the details about this Asus-DC collaboration.

The renders for the ROG Phone 6 Batman Edition has surfaced online today, thanks to the popular tipster Evan Blass in partnership with 91Mobiles. The renders give us a look at the design changes afoot.

As you can see in the render above, Asus is making minor changes to the back panel of the ROG Phone 6. First, the red color scheme has been replaced with teal-cum-purple colors. Next, you can notice that the display on the rear now displays the “ROG and Batman” text by default, along with the Batman insignia.

Also, there’s a new line of text under the display, which reads – “ROG Phone 6 Batman Edition,” fessing up the official name of this cool, upcoming device. Turning our attention to the front, it looks like you will also get some exclusive Batman wallpapers, and likely a similar-themed icon pack.

That’s pretty much it for the collaboration, it seems. The specifications for the ROG Phone 6 will likely remain unchanged, which means you will get a 6.78-inch Full HD+ AMOLED display with a 165Hz refresh rate, Snapdragon 8+ Gen 1, GameCool 6 cooling system, and a 50MP triple camera, a 6,000mAh battery with 65W