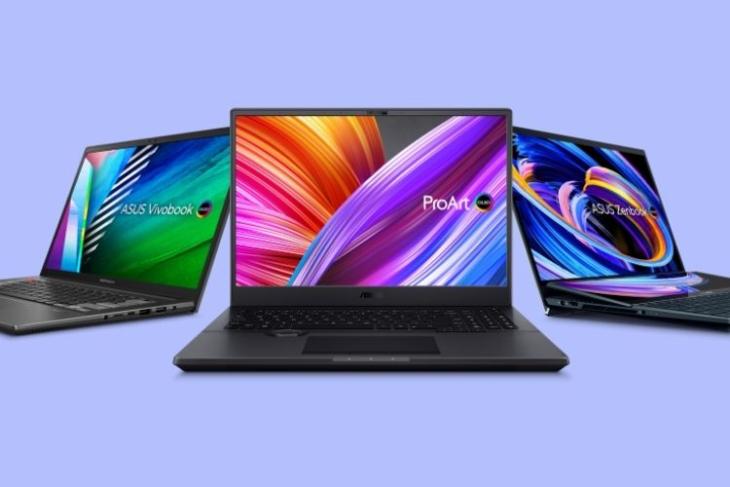 At its ‘Create The Uncreated’ virtual launch event today, Asus has expanded its creator-centric laptop lineup with the launch of the new ProArt Studiobook 16 series, Vivobook 14X and 16X, and new Zenbook laptops. Since the Taiwanese giant is targeting content creators, each of the laptops unveiled today includes OLED screens. This is paired with the latest 11th-Gen Intel and Ryzen 5000 series processors and Nvidia RTX 30-series GPUs to offer the necessary performance for seamless content creation.

With that said, let’s not waste more time and take a look at the specifications of all the new creator-centric Asus laptops launched today:

First up, we have the Asus ProArt Studiobook 16 and Pro 16, which have been designed specifically for creators. Both feature a 16-inch 4K OLED HDR display with a 16:10 aspect ratio and 3840 x 2460 resolution. The panel also boasts a 100% DCI-P3 color gamut, Delta E < 2, up to 550 nits of peak brightness, Pantone validated and Calman verified certifications.

Under the hood, Asus has taken care of fans from both Intel and AMD camps. The ProArt Studiobook 16 series comes with both Intel and Ryzen 5000 series CPUs and Nvidia GPUs. There are a few differences between the standard and Pro variant, though. While the standard variant supports up to 11th-Gen Intel Core i9-11900H or Ryzen 9 5900HX processors and up to GeForce RTX 3070 GPUs, the Pro variant includes a 3rd-Gen Intel Xeon workstation processor and up to Nvidia RTX A5000 GPU.

The internals here are backed by the Asus IceCool Pro Thermal solution, which operates at up to 110W in normal mode and up to 140W in performance mode. The highlight of the ProArt Studiobook 16 series will, however, have to be the physical DialPad. Asus has partnered with Adobe to make it easier for creators to control certain functions in Photoshop, After Effects, or Premiere Pro with the dial.

Alongside the ProArt Studiobook 16 lineup, Asus has unveiled a myriad of peripherals, including an OLED monitor, ProArt mouse, and more. The ProArt Mouse MD300 is the company’s first mouse to include Dial support. It also features a laser sensor that tracks up to 4200 dpi, 1000Hz polling rate, and a side scroll wheel among other things.

Asus has also launched the Vivobook Pro 14X and 16X with up to 4K OLED panels, a virtual Asus DialPad on the trackpad to make it easy for creators to make precise changes, and both Intel/AMD SKUs. As their name suggests, the Vivobook 14X and 16X include 14-inch and 16-inch 4K OLED HDR panels with a 16:10 aspect ratio, 100% DCI-P3 color gamut, up to 600 nits of peak brightness, and slim bezels. The company claims that to offer the world’s first 16-inch 4K OLED 16:10 display with the Vivobook Pro X16.

Both the Vivobook Pro models are pretty lightweight, with the 14-inch variant weighing just 1.45kgs. These laptops feature a clean design and a cool dual-tone keyboard design with a bright orange Esc key. The keyboard is backlit and keys have a decent 1.35mm key travel.

The Vivobook Pro X14 and X16 include 11th-Gen Intel Core H-series and AMD Ryzen 5000 H-series processors and up to GeForce RTX 3050Ti GPU under the hood. You also get up to 32GB of RAM, 1TB of storage, and up to a 96Wh battery to back your creative endeavors while you’re on the move.

On the other hand, the standard Vivobook 14/ 15 laptops feature up to 2.8K OLED panels with a 16:10 aspect ratio and up to 2880 x 1800 resolution. Under the hood, these laptops also have both 11th-Gen Intel H-series and Ryzen 5000 H-series SKUs with up to GeForce RTX 3050 GPU. The rest of the specifications are pretty much the same as the Pro variants. Both of these variants do not have the virtual Asus DialPad and instead come equipped with the virtual NumPad.

Apart from the ProArt Studiobook and Vivobook lineups, Asus has also launched the Zenbook 14X and Zenbook 14 Flip to give users more choice of powerful yet portable creation machines. Both the laptops include 14-inch OLED HDR displays with a 16:10 aspect ratio and slim bezels, up to 11th-Gen Intel H-series and Ryzen 5000 H-series processors, and more. Asus’ innovative features like ScreenPad and Ergolift hinge have been utilized in these models.

All of these creator-centric laptops will be available for sale globally. The price and availability might vary depending on the region, so stay tuned for the Indian prices.