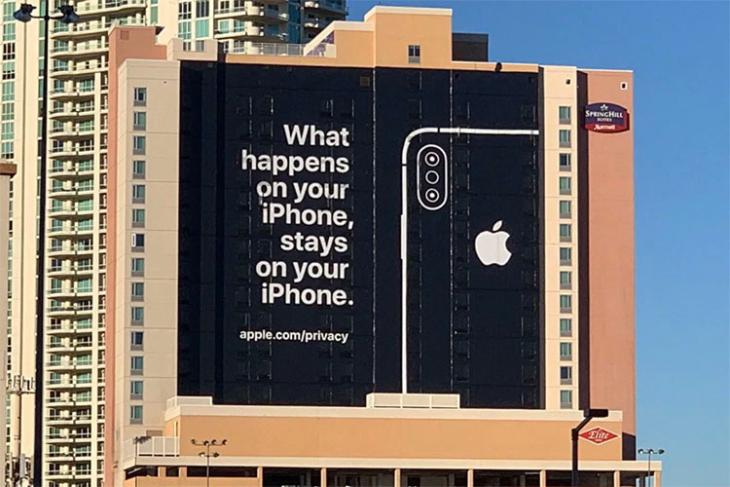 On behalf of all users, people from Rhode Island and Michigan in the US have filed a class action suit against Apple alleging a potential data breach situation and false advertising.

The suit is pegged to a recent Apple billboard put up in Las Vegas, promoting privacy that reads: “What happens on your iPhone, stays in your iPhone.”

However, Leigh Wheaton, Jill Paul and Trevor Paul in their suit claimed that Apple profits from releasing the extensive demographic data it has about its users, their full names, ages, and addresses, plus their history of music listening preferences, Apple Insider reported on Saturday.

People believe Apple’s advertising is untrue because “none of the information pertaining to the music you purchase on your iPhone stays on your iPhone”, the report said.

Lawyers for the plaintiffs are seeking $250 for Wheaton and every user allegedly affected, plus $5,000 for the complainants.

Even though the suit does not establish how many people would be involved beyond “tens of thousands”, the filing says that the “aggregate amount in controversy exceeds $5,000,000”.

To support the claim that Apple “sells, rents, transmits and/or otherwise discloses, to various third parties”, the suit includes details of such information being available to buy, the report added.

The suit has been filed against Apple in the US District Court, Northern District of California but the iPhone-maker has not commented on the lawsuit as yet.

Earlier in 2016, iOS developer Ben Dodson filed a bug report to Apple saying that the current system could allow details of a user’s entire music database to be revealed.

When iOS 10 was released, Apple just included a notice informing users that their data would be used this way.