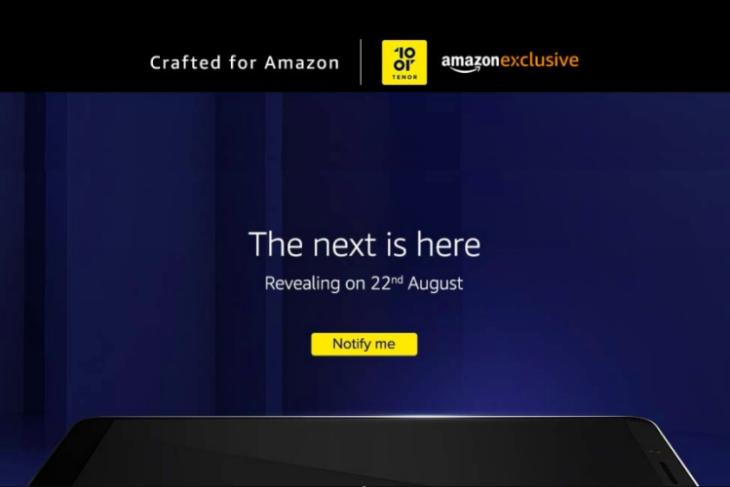 Amazon is ready to expand its 10.or (pronounced as Tenor) smartphone lineup to capture a piece of the budget ecosystem pie in India. It is now teasing the launch of a new device on August 22 and we have come across hints that it will be the 10.or D2.

Amazon India has created a landing page for its upcoming 10.or smartphone but there’s not much info available on it, except for the launch date. It features a teaser video that reveals that the device will join the crop of latest Android phones and bring along a taller 5.45-inch 18:9 display (which almost seems mandatory in 2018).

We know you've been waiting for what's next and it's finally here!
Stay tuned for the full reveal on 22 August. Get ready for a new smartphone experience Created By Us, #DefinedByYou! #CraftedForAmazon #AmazonExclusive pic.twitter.com/4RuH4oA1Qv

There’s no mention of which phone Amazon is launching under its ‘Crafted by Amazon’ program, where it ties up with third-party OEMs. However, a peek at the landing page’s source code reveals that the teasers are for 10.or D2, which is going to be a successor to last year’s 10.or D.

The 10.or D2 will upgrade on its predecessor, which is powered by a Snapdragon 425 chipset with 2GB or 3GB RAM and 16GB or 32GB storage. It also brought along a 13MP rear camera, 5MP selfie shooter, and a rear-placed fingerprint sensor. Amazon’s 10.or D was running Android 7.1.2 Nougat out-of-the-box and received Android 8.1 Oreo update earlier last month.

10.or D2 More Expensive Than Predecessor Despite Downgraded Specs