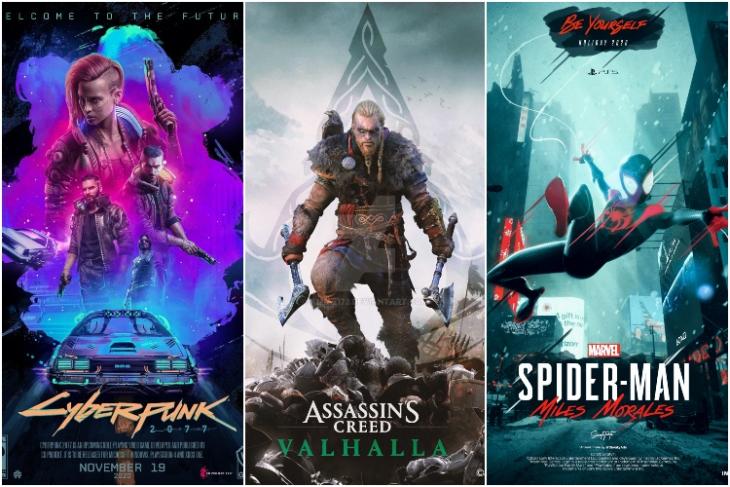 As most of the global population is stuck indoors, game developers are flooding the market with their latest titles with each passing month. Last month, we saw some of the most-awaited games make their way to the gaming scene. However, we are not at all done yet.

Major game developers, including Ubisoft, Insomniac Games, CD Projekt Red, and Activision are set to launch some of the biggest titles of the year next month, as next-gen consoles from Sony and Microsoft make their way to eager gamers.

So, here are the six biggest games of the year that will hit the market in November.

One of the most hyped games of the year, CD Projekt Red’s Cyberpunk 2077 is finally hitting the market in the coming month. The game is set in a futuristic metro-city dubbed as the Night City. The players will play as V and choose from three different “Lifepaths” to set the narrative of the game.

After working for years, CD Projekt Red recently announced that the video-game “has gone gold” and is ready for launch. So, the developers are finally bringing out the game on November 19 for the above-mentioned platforms.

You can pre-order it from here.

Developed by Marvel, Spider-Man: Miles Morales is one of the biggest titles to make its way to the gaming market next month. The game will be set in Harlem, where Miles now lives after the events of the previous Spider-Man title, which released back in 2018.

In this open-world RPG, the players will take control of Miles to protect his now-home city of Harlem and his former home city of New York from a massive gang war between two major violent organizations, one of which is led by one of Spider-Man’s villain, The Tinkerer.

The game is a PlayStation exclusive and will come for the upcoming PS5 on which it will have an option to run at 4K 60FPS. And moreover, it is launching on the launch day of the PS5, which is on November 12.

Pre-order it from here.

One of the most awaited games of the year, Assassin’s Creed: Valhalla is making its way to market next month. The successor to Ubisoft’s previous Assassin’s Creed: Odyssey, this new open-world RPG will take the players to 9th-century England to capture kingdoms and expand their settlements.

The game, which will be much shorter than its predecessors, is set to hit the market on the same day on which Microsoft is releasing the new Xbox Series X|S consoles, that is, November 10. And as mentioned above, the game will be available for the next-gen consoles at launch.

Developed by the British game developing company, Codemasters, Dirt 5 is supposed to be a pumped-up car-racing game to give you that sweet adrenaline rush. It is essentially the 8th game from the developers to carry the “Dirt” title and the 14th game in the Colin McRae Rally series.

“Dirt 5”, after a lot of delays, is finally hitting the market on November 6, ahead of the launch of the next-gen consoles. Apart from the aforementioned platforms, the game is also coming for Sony’s upcoming PS5 and Microsoft’s Xbox Series X|S.

You can get the game from here following its release.

Developed by Treyarch and Raven Software, the Call of Duty: Black Ops Cold War is set to come to the market next month. The game will feature a single-player campaign with fan-favorite characters like Alex Wood and Frank Mason. Moreover, there will also be a co-op mode through which players can enjoy the RPFPS game with friends and family.

We have a dedicated everything-we-know article covering every aspect of the game. You can check it out to know more about this upcoming action-packed video-game. The game is set to hit the market on November 13 with support for the next-gen consoles.

If you are a fan of the analytical aspect of the outdoor game and have an aspiration of becoming a manager of a football team in the future, you surely have reasons to be excited about this game from Sports Interactive.

It is making its way to the gaming scene at the end of November on the 24th.

And that wraps up the list of 6 of the biggest games that are making their way to the gaming scene in November 2020. Personally speaking, I am pretty hyped for Spider-Man: Miles Morales and Cyberpunk 2077.

Which of these games are you most excited about? Let us know down in the comments section.