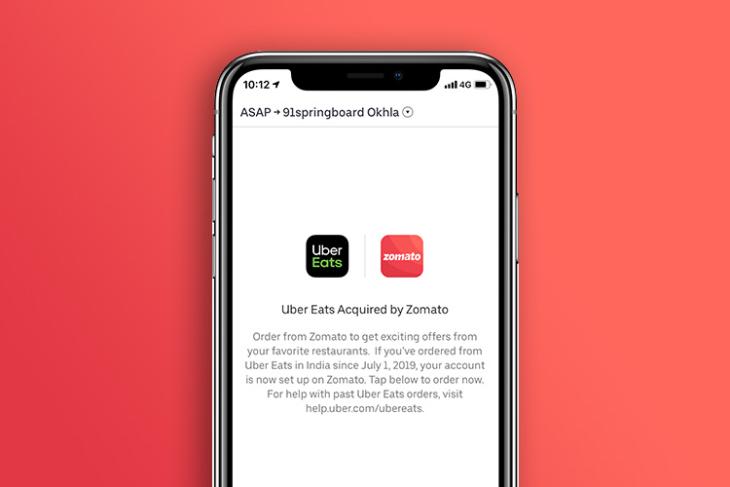 Indian food delivery company Zomato has reportedly acquired UberEats India in an all-stock deal valued at nearly $350 million, or approximately ~₹2,500 crore. With the stock deal, Uber gets a 10% stake in Zomato.

The deal, under which UberEats’ app in the country will cease to exist, will also see hundreds of UberEats executives either relocated in different Uber verticals or laid off, since Zomato isn’t absorbing UberEats’ team into its workforce. Users of the Uber food delivery app will now be redirected to Zomato’s app instead.

Moreover, select UberEats users will be getting some impressive offers from Zomato as well, including 50% off on the first 3 orders, along with a free 3 month subscription to Zomato Gold.

According to sources, the deal between Zomato and UberEats India was in the works for almost a year, and was helped along by Zomato’s latest round of funding led by Alibaba-affiliate Ant Financial which recently boosted Zomato with a $150 million funding, at a $3 billion valuation.

Since its launch in the country, UberEats has failed to gain traction among Indian users, with companies like Swiggy and Zomato leading the pack when it comes to food delivery options in the country. Uber, in its latest quarterly results, noted that the food delivery arm of the company had been a major drag for its revenue, with an operating loss of ₹2,197 crores for five months.

With Zomato’s acquisition of UberEats India, the company’s customer base in the food delivery market in the country is expected to grow to somewhere around 50 to 55%, which will make it an even bigger player in the field, giving it an edge over its competition.