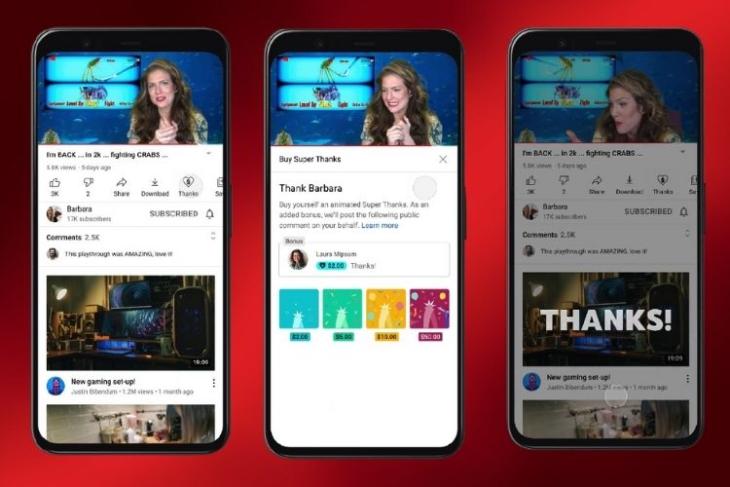 After adding three new features, including clips, subscriber-only chats, and live polls, to help content creators improve their live streams recently, YouTube has today rolled out a new feature for creators to monetize their content. Dubbed “Super Thanks”, the feature lets YouTubers make additional money from their content as it gives their viewers and subscribers the ability to send monetary rewards on their existing videos.

The Google-owned company announced the new feature via an official blog post. In the post, YouTube cited the popularity of Super Chat and the Super Stickers features on the platform, which the company introduced in 2017 and 2019, respectively. Super Thanks is essentially an expansion of the “Super” monetization features.

Now, for those unaware, the Super Chat and the Super Stickers feature allows fans and viewers to send monetary bonuses to their favorite creators during their live streams and premieres. The Super Thanks feature, on the other hand, allows fans and viewers to buy Super Thanks on YouTube to gift their favorite YouTubers for any existing video on their channels and not just live streams and premieres.

How to Turn On Super Thanks (Eligible Creators Only)

Creators who get access to the Super Thanks feature can toggle it on from YouTube Studio. If the feature is available to you, you can turn it on/ off from a new “Supers” tab under the Monetization option in YouTube Studio.

If the Supers tab is not available to you, the feature is not live for you yet. Moreover, it is worth mentioning that Super Thanks will only be available for those who are already in the YouTube Partner Program and are eligible for monetization.

Super Thanks Icon and Pricing

Once turned on, viewers will see a new dollar-inside-a-heart glyph under YouTube videos. Tapping this new icon will take viewers to the Super Thanks purchasing page, where they can purchase give Super Thanks to their favorite content creators. Currently, the price ranges from $2 to $50 in the US. In India, the Super Thanks prices range from Rs. 40 to Rs. 1,000. 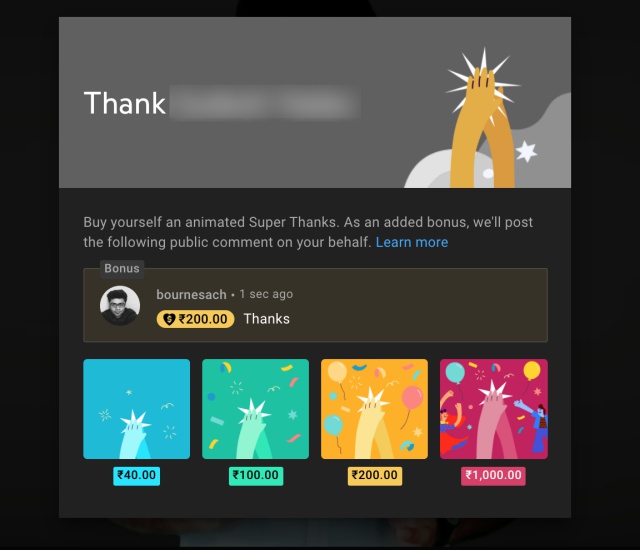 So, YouTube says that Super Thanks serves as a double-duty feature for creators. It lets them connect with their most active fans and subscribers while providing a new way to make money on the platform.

“At YouTube, we’re always looking for fresh ways creators can diversify their revenue streams. That’s why I’m excited to unveil our fourth Paid Digital Good — Super Thanks. This new feature gives creators yet another way to earn money while also allowing them to strengthen relationships with viewers,” said Neal Mohan, the Chief Product Officer at YouTube.

With today’s expansion, YouTube has made the Super Thanks feature available to thousands of eligible creators in more than 68 countries. It should be visible to viewers on both the web platform as well as mobile apps (Android and iOS). YouTube will roll out the feature to every monetizing creator later this year.