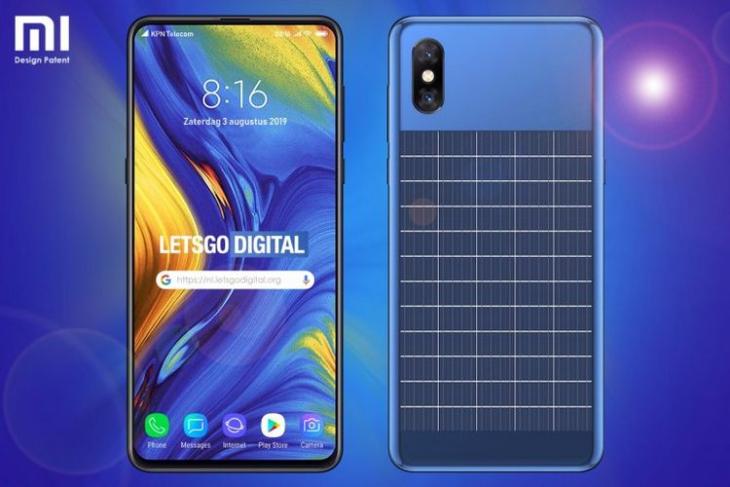 A patent filed with the World Intellectual Property Office (WIPO) last year suggests that Xiaomi has been working on smartphones with integrated solar panels. Believed to have been first discovered by Dutch tech blog, LetsGoDigital, the design patent was filed on July 27th, 2018, and shows a full-screen, no-notch smartphone with an integrated solar panel at the back. The exact technical details are not immediately known, including the phone’s battery capacity and how quickly the solar panels will be able to juice it up.

As can be seen from the design below, the phone lacks any obvious housing for a selfie camera (either within a notch or a pop-mechanism), suggesting that Xiaomi might have plans to use its under-screen selfie camera, something that the company demoed a few weeks ago. It also doesn’t have a physical fingerprint scanner on the back, which means it might feature an in-display fingerprint scanner, which is increasingly more common this year.

While eco-friendly phones with solar charging options sound cutting-edge, it isn’t exactly revolutionary in 2019. Samsung had released not one, but two solar panel-equipped phones, called the Guru E1107 and the Blue Earth S7550, as far back as in 2009. The same year, fellow South Korean tech giant, LG, also released a similar device called the LG Pop GD510, which came with an optional detachable cover with an integrated solar panel.

Meant for developing countries where power outages are regular occurrences, the feature phones needed to be charged for an hour for just 5-10 minutes of talk-time, which is why they never became popular among mainstream consumers. It will be interesting to see if the technology has improved enough in the intervening decade to make such devices lucrative among consumers this time around.