Skip to content
Home What is What is WhatsApp Business and How Does it Differ From Original WhatsApp?

What is WhatsApp Business?

WhatsApp Business is a new feature that the Facebook-owned company has been testing for several weeks now, although, it’s availability has been restricted to a very few beta testers up until now. As the name suggests, WhatsApp Business is aimed at businesses that may want to use the wildly-popular instant messaging app to connect with their clients. Businesses that sign up to join the platform will be able to use the service to provide their customers with updates about timings, confirmations and other info. 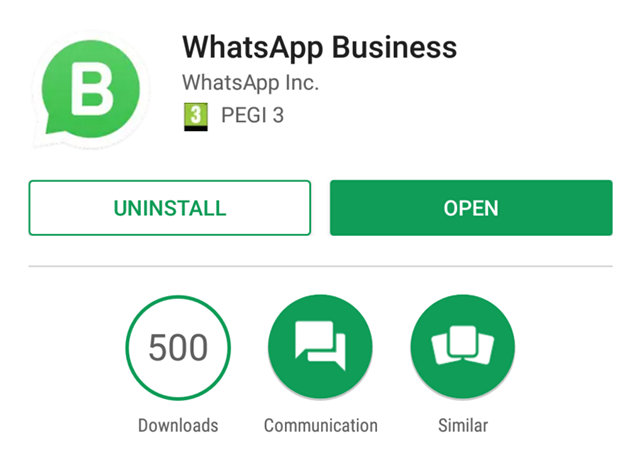 According to latest reports, the WhatsApp will keep the consumer-centric original application separate from its upcoming business-related service that will reportedly be launched as an entirely different app called ‘WhatsApp Business’. In fact, as can be seen from the image below, the company is apparently planning to launch not one but two different services as part of its foray into the enterprise sector, by separating its offerings for small businesses and large enterprises. While details are hard to come by at this stage, the former will likely be offered free-of-charge (at least initially) while the latter is expected to be a paid-for service.

Before we get to the key features of WhatsApp Business, lets get this one thing out of the way: the two apps will reportedly look and feel fairly similar in terms of their user interface if the leaked images are anything to go by, but one of the key areas of difference will be the logo that will reportedly feature a white ‘B’ inside the familiar green conversation bubble instead of the telephone receiver that we’re used to in the general app.

WhatsApp Business comes with quite a features that are simply not present in the original WhatsApp, including the creation of a Business Profile, which will require users to fill in their ‘Business Description’, ‘Website’, ‘Address’ etc. One of the interesting feature that the new service is expected to bring is Chat Migration which, as its  name suggests, allows users to transfer their chats from one device to another or even one account to another. The company has accounted for various scenarios that include using the app on a single device or multiple devices at the same time. Users will also reportedly be able to use WhatsApp and WhatsApp Business on the same device simultaneously, but only with different numbers. 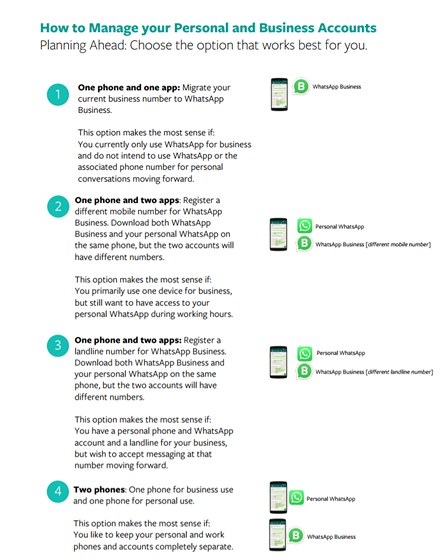 One interesting point here is that users will also be able to use landline numbers to create WhatsApp Business accounts; a privilege not yet available for regular WhatsApp users. Implemented correctly, the various permutations and combinations that promises to allow business owners to separate their business accounts from personal ones is certainly a welcome step, as it would help people keep their personal and professional lives separate. 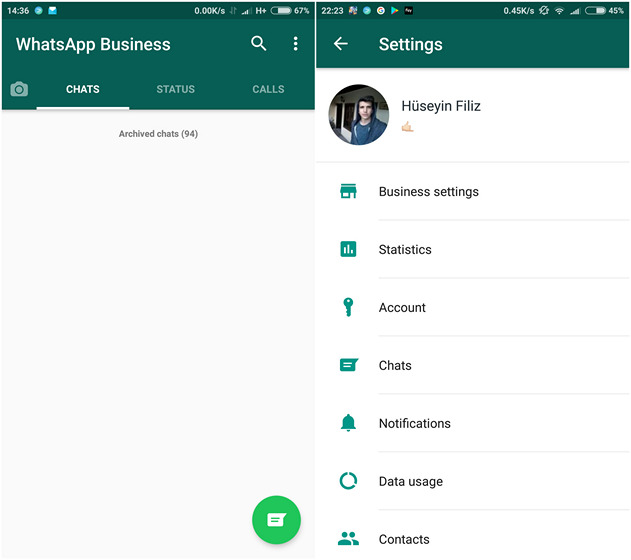 A couple of other predictable business-oriented features that will reportedly be available with WhatsApp Business are Auto Responses and Analytics. With the first, users will be able to customize ‘away messages’ that will go out automatically when clients send messages outside business hours, while the latter will provide business owners with detailed info on important statistics like the number of messages sent, received, delivered and read. 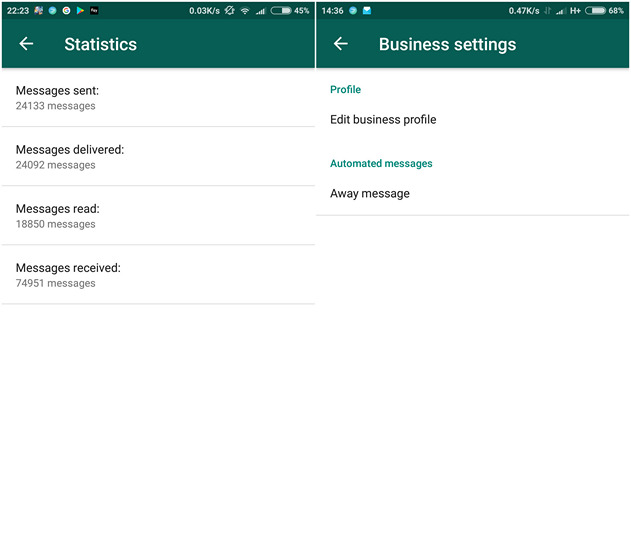 WhatsApp Business isn’t available for download on the Google Play Store right now, but you can sign up to be a tester by completing a simple survey. In case your request is accepted, you will reportedly be able to access the new app on the Play Store at this link once you’re logged in with the same Google account. You can also download the APK file from APKMirror, but to be able to actually use the service, your request still needs to be accepted by WhatsApp first. 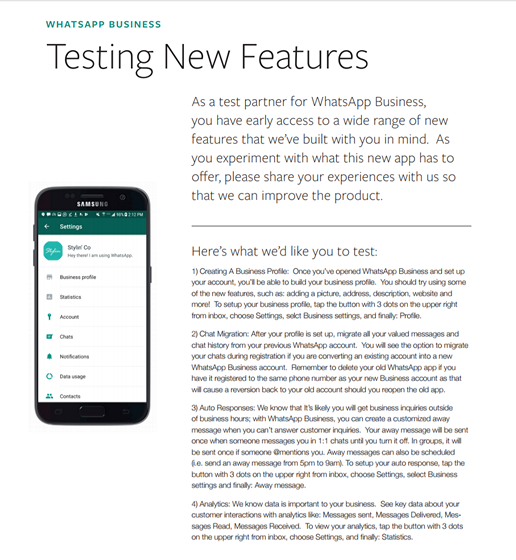 Will Things Be Any Different for Regular Users?

As a general WhatsApp user, you’ll see the same message about your chats being fully encrypted end-to-end, but you’ll also see a pop-up that will inform you about the verification status of the business account you’re trying to start a conversation with. In addition to that, you’ll also see all the account details of the business owner including image, location, business category, e-mail IDs, website(s), etc. 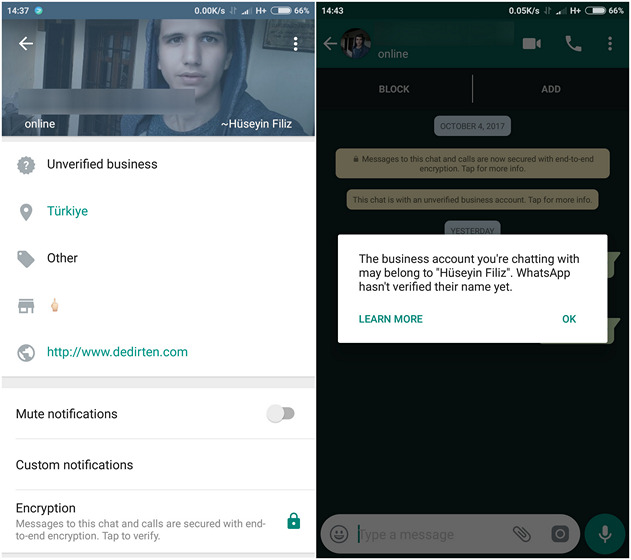 When Will WhatsApp Business Launch Commercially?

WhatsApp Business is now available on the Play Store but as of now, it’s limited to a few countries, like Indonesia, Italy, Mexico, the UK and the US. The company has announced that other countries like India, will get the app in the coming weeks. However, some companies in India are already on board with WhatsApp Business, BookMyShow was reportedly the first Indian company to have gotten its WhatsApp account certified as a ‘verified business account’, as symbolized by a green tick next to its name. Other companies, like Ola, OYO Rooms and various private airlines are also reportedly all set to join the list in the days to come.

SEE ALSO: 15 Cool WhatsApp Tricks You Should Be Using

WhatsApp Business: What Will it Offer Businesses and Customers?

While most of what we know about WhatsApp Business is still in the realms of rumors and speculations, it probably shouldn’t take long for the company to officially announce more details about the service. Whether it will ever become as ubiquitous in the enterprise arena as it has become among consumers remains to be seen, but with all the efforts Facebook is putting into its instant messaging service, it would be a massive surprise if it doesn’t. At least that what we think about it here at Beebom, but what about you? Do you also think WhatsApp can replicate its consumer-level success in the enterprise arena? Or do you think business correspondence through instant messaging is one step too far for you? Do let us know by posting your thoughts in the comment section below, because we love hearing from you.