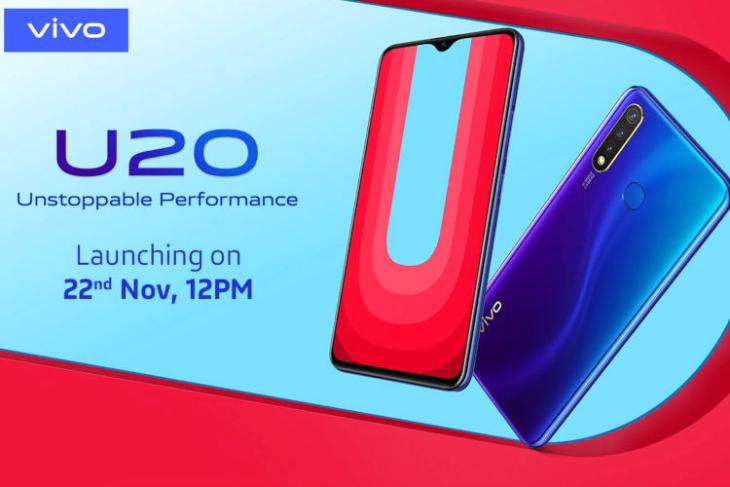 Back in September, Vivo launched the Vivo U10 in India for a starting price of Rs. 8,990, and now, the company has announced that the next smartphone in its “U” series of phones will be called the Vivo U20, and will be launching in India on November 22.

A landing page for the upcoming Vivo U20 is live on Amazon right now, and it gives away some important details about the smartphone. For starters, the Vivo U20 will run on the Snapdragon 675 Mobile Platform. This mid-range processor will be paired with up to 6GB RAM. Vivo hasn’t given away any details about the storage variants we can expect from the phone, but it did mention on the Amazon landing page that the phone will use UFS 2.1 storage.

Apart from that, we can see that the U20 looks very similar to the U10 with the teardrop notch up front, except for a thinner chin on the bottom. On the rear, there’s still a triple camera module, along with a physical fingerprint scanner. The module does look longer now, because the company has placed the flash inside the camera module itself.

We can also see that one of the colours the Vivo U20 will be available in is a blue gradient back, which might be called something similar to ‘Electric Blue’ if the Vivo U10’s colour-names are any hint.

Anyway, the Vivo U20 will launch at 12PM IST on November 22, and we will be covering the launch when it happens, so stay tuned for more details around the spec-sheet, the camera configuration, and the pricing for the smartphone.