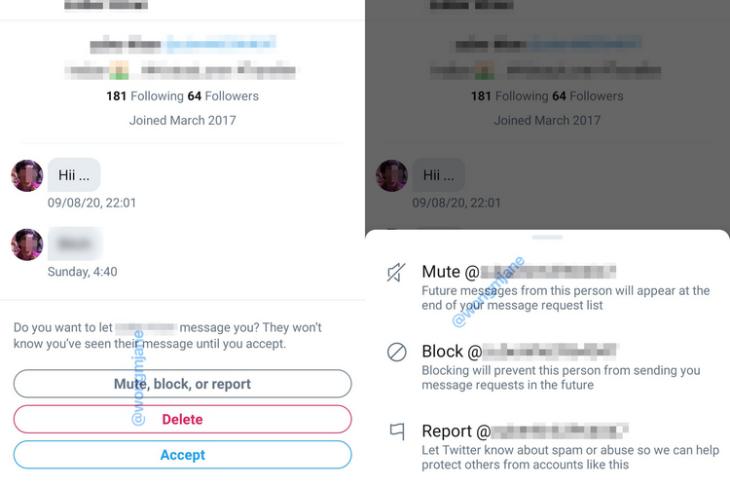 When you currently get a message request on Twitter, you can either block the person from sending messages or report the message, apart from the obvious option to delete and accept the request. To bring more flexibility, Twitter is now reportedly working to add a mute option for DM requests.

First spotted by app reverse engineer Jane Manchun Wong, muting a DM request will push all of the new messages from the person to the end of your list of message requests. This way, you don’t have to bother about their DM requests without explicitly blocking them. “Future messages from this person will appear at the end of your message request list,” reads the feature description.

i guess the creeps aren’t gonna be thrilled of this feature 😌 pic.twitter.com/D3ZuqtqscO

While blocking is the ideal solution if you don’t want strangers to ug you with message requests every so often, the mute option will come in handy for those who don’t really want to block a person just because they sent a message.

Separately, Twitter is also testing the possibility of opening the tweet composer directly when you hit the retweet button on the web. However, this doesn’t mean that textless retweets are going away. As Wong notes, you can retweet tweets without adding any text to the tweet composer, at least for now.

Twitter is working on making the Retweet button open the composer directly, getting rid of the menu

with this prototype, as of now, it’s still possible to retweet by not entering anything in the text area and press the “Retweet” button pic.twitter.com/71BkDct26C

While this is a subtle change, there are two benefits to this. Firstly, this approach will eliminate the need for having two buttons – Retweet and Quote Tweet when the user wants to retweet. Also, this could slow down retweeting without a second thought.

Twitter has not officially confirmed the existence of these two features just yet. Since these are minor changes, we could see them being announced in the coming weeks.

Twitter Testing a Way for You to ‘Unmention’ Yourself from Conversations