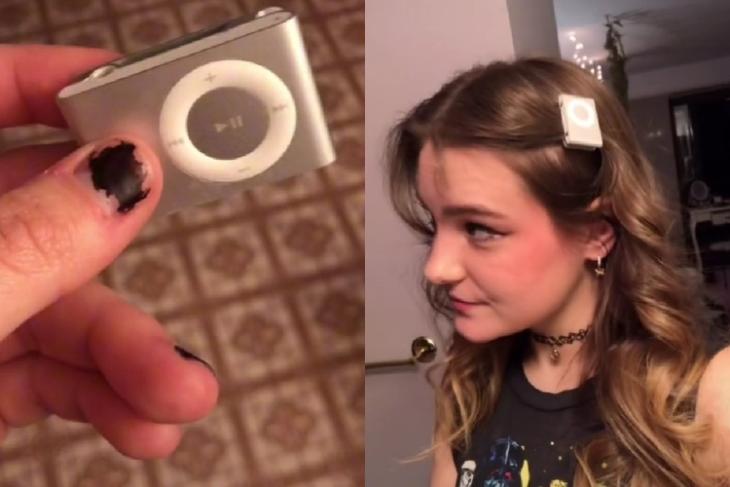 A recent TikTok video showing Apple’s iPod Shuffle as a hairclip has gone viral, garnering over 2 million views on the short-video platform and making us Millenials feel old. The 15-second video clip shows a girl holding a second-gen iPod Shuffle with the text “anyone know what this is?!??!” hovering over it. In the next frame, the girl pinned the digital audio player onto her hair, using its in-built clip.

The video, which was shared about a week ago, went viral on the uber-popular short-video platform as more than two million people went to watch it and comment how old they felt. It came from TikToker Celeste Tice (@freckenbats) and has around 2.5 million views, 268,000 likes, and over 13,000 comments as of writing this article.

“So, I found this old iPod…I don’t know, like a hair clip thing,” Tice jokingly said as she fidgeted with the built-in clip at the back of the device. Following her statement, she modeled a few poses in front of the camera with the iPod Shuffle pinned to her hair while Britney Spears’ Toxic played in the background. You can check out the video on TikTok from right here. Be sure to use a VPN if you are accessing TikTok from India.

For those unaware, the built-in clip at the back of the iPod Shuffle was to clip the device onto a shirt or a wristband of a user during a workout or a jogging session. However, Tice went creative with it and used the clip to make a hair clip out of the iPod Shuffle.

To recall, Apple released the first-gen iPod Shuffle back in 2005. The digital audio player, which comes in a compact form factor along with the necessary buttons to control music playback, was later discontinued by the Cupertino giant in 2017.

Now, if you are thinking that Tice is unfamiliar with the iPod Shuffle that she showcased in the video, I have to say that you are wrong. In a subsequent video, the TikToker revealed that the second-gen iPod Shuffle actually belonged to her when she was 10 years old.

However, in the viral video, where she joked about using the device as a hairclip, several commentators went on to state how old they felt while watching the video. “Look I am not gonna let [you] make me feel old at 26,” wrote a user. Although Tice joked about using the iPod Shuffle as a hairclip, I kinda like the idea. What do you think about it? Let us know your thoughts in the comment below.