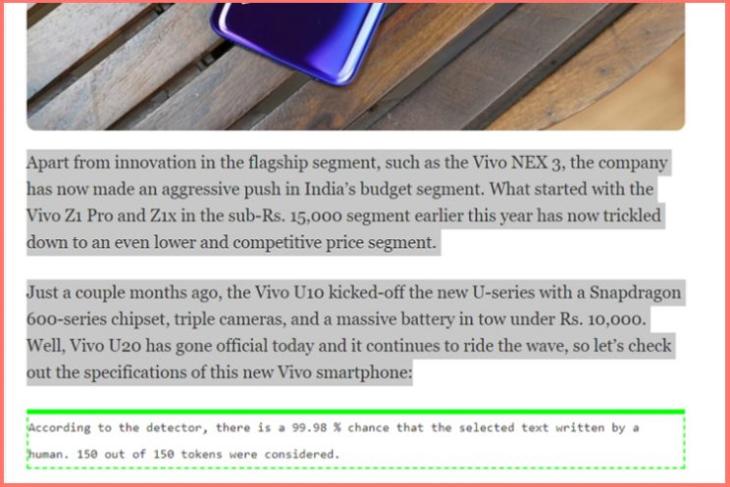 We live in an age where AI’s are getting better and better to generate chunks of text that could sound just human. In fact, recently, AI-generated speeches that resemble Trump managed to fool almost 60% of people. Hence, it is necessary to have a mechanism to differentiate truth from fake text generated by AI which is exactly what this Chrome extension promises.

Named GPTrue or False, the extension is based on OpenAI’s GPT-2 Detector model. It gives you a probability indicating how accurately the software believes if the input text got created by a human.

“As synthetic data generation gets more and more sophisticated, we become more and more vulnerable to being swayed in one way or another…In a world where reviewing has been open-sourced, this system can be abused and consumers arbitrarily swayed to a particular business.”, Giulio Starace, the creator of GPTrue or False told Digital Trends.

Using the extension is fairly simple, once you have got the extension installed, you will have to select at least 50 words and click on the extension’s icon from the Chrome menu. It will then rate the text in a few seconds.

However, it is worth noting that the results of this extension should not be taken as a final word to judge the legitimacy of a piece of text as there might be a few exceptions or discrepancies in the detection.

“There are some funny examples of this on my Twitter where people show that the detector wrongly classifies a speech from Trump as computer-generated, and likewise on an excerpt by James Joyce. So either Trump and James Joyce are robots, or the detector is imperfect.”, Starc added.

In my testing, the extension worked quite fine for differentiating text written by AI and humans. Check out the extension from the below link and let us know your experience in the comments.

This Chrome Extension Lets You See Timestamped Comments on YouTube

This Chrome Extension Lets You Leave Sticky Notes on Websites