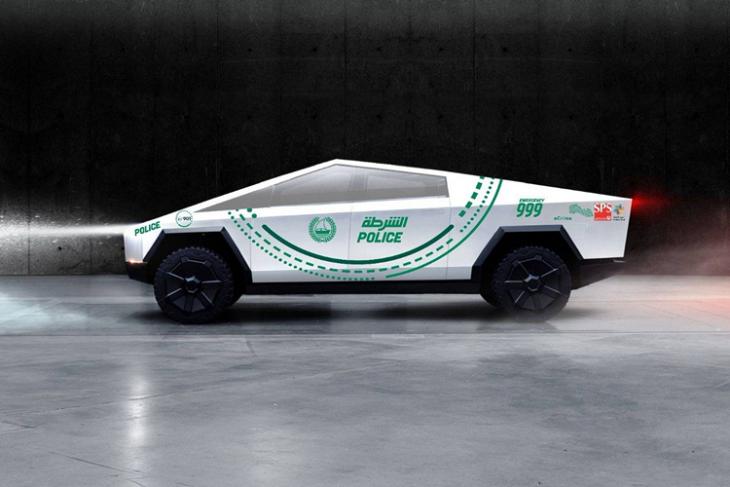 In case you are unaware, The Dubai Police department has some of the best luxury sports cars including the Bugatti Veyron and Lamborghini Aventador. Seeing an electric pickup truck amongst this lineup is indeed incredible, isn’t it?

Don’t get me wrong, the Cybertruck isn’t inferior in the lineup by any means. It can do an impressive 0-60 in 2.9 seconds, and a quarter-mile in 10.8 seconds. What makes Cybertruck an apt police cruiser is its “bulletproof” nature as the company claims that it can withstand 9mm handgun bullets.

Elon Musk has confirmed that the electric pickup truck has already received 250,000 pre-orders. This deal will be certainly beneficial for Tesla from a business point of view and it will boost the sales of the Cybertruck.

However, it remains unclear how the 2020 timeline will be fulfilled by the electric car maker as the Cybertruck was announced to begin production by late 2021 for the single and dual-motor versions and late 2022 for the tri-motor truck variant.

So, what are your thoughts on the Tesla Cybertruck? Now that it has been over a week since its unveil, you must have picked a side regarding its design aesthetics. I personally like the design of Cybertruck. Which side are you on? Let us know in the comments.

Nikola’s Badger Is Aiming to Take on Tesla Cybertruck

Meet Cybunker, a Futuristic Garage for the Tesla Cybertruck