The Chinese giant is, however, looking to court more users who’re finally giving in to the smartphone hype and converting over with the Redmi Go. It’s a sub-Rs 5000 smartphone that has a large screen, Android Go, and all essential features that you look for in budget phones. 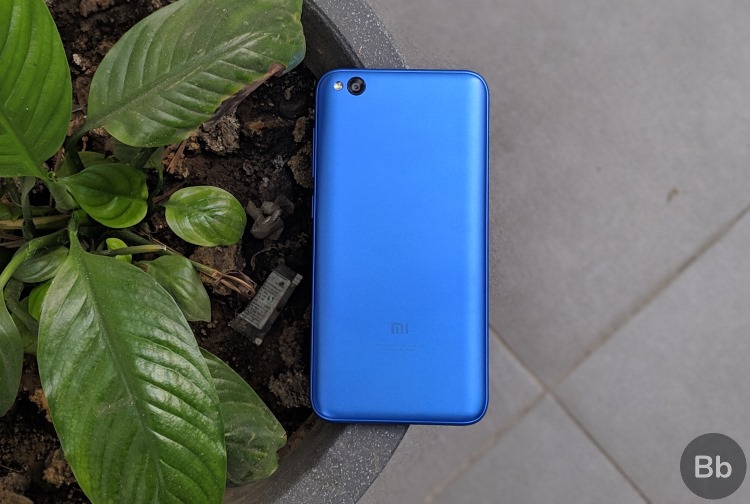 Xiaomi was kind enough to lend us the Redmi Go, the blue color variant, and I have been using it for the past few hours. Here are my first impressions of the Redmi Go:

The Redmi Go comes packed in a familiar red cardboard box that we have seen from Xiaomi in the past. It comes with the Redmi Go branding in bold letters on the front and not a whole lot inside. Here’s everything you’ll find inside the box: 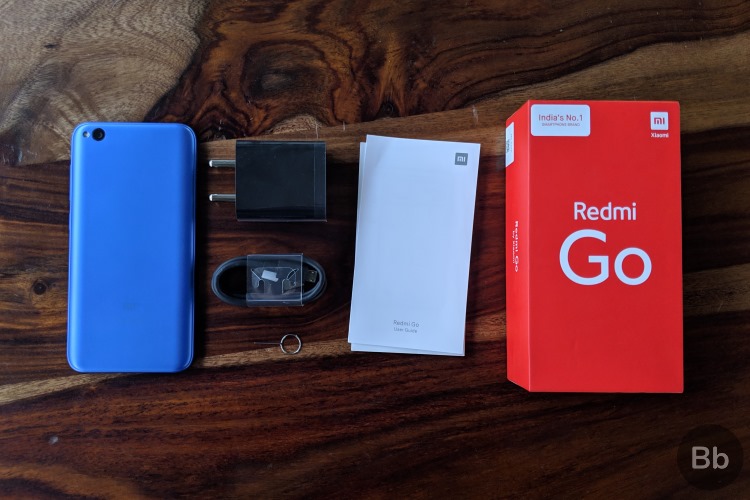 One shouldn’t really expect to see a pair of earphones or a silicone case bundled with the phone simply because of its affordable price tag. No complaints here.

Before we delve into my first impressions of the Redmi Go, let’s take a quick peek at the specs sheet:

While Xiaomi may have switched to a newer and trendy “Aura design language” with the mid-range Redmi Note 7 Pro, the Redmi Go will instantly remind you of the older budget phones from the company. The brushed metallic polycarbonate build of the Redmi Go feels similar to what we’ve seen on Xiaomi budget phones like the Redmi 6A and others.

The brushed metallic finish of the Redmi Go feels really good and the curved rear panel makes for a comfortable in-hand feel. It quickly gets smudged with sweaty palms, which can’t be avoided if you’re using the device without a case. 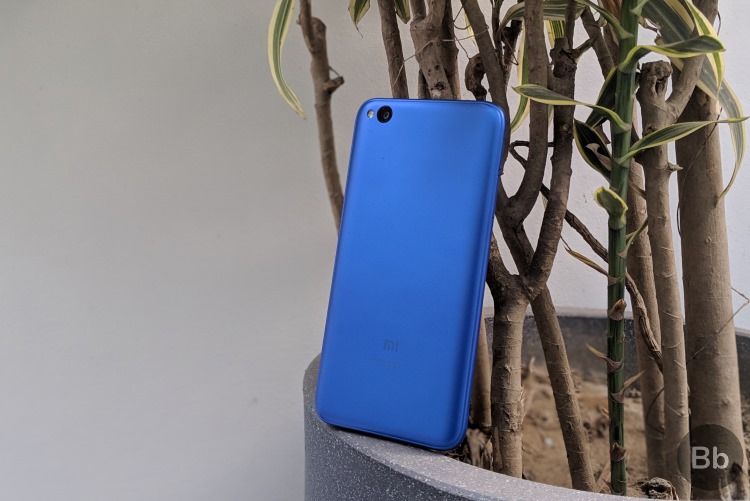 We’ve got the blue color variant with us and no, it isn’t blingy or shiny like a ton of phones with gradient backs these days. The rear camera sits flush with the rear panel but it’s higher placement, along the top edge, bugged everyone who saw it in our office. I was fine with it initially but not I can’t ‘unsee’ it.

The power key and volume rockers on the right edge are made from plastic as well. They feel a little mushy for my liking. Redmi Go includes the microUSB port, speaker, and the primary microphone at the bottom edge, and the 3.5mm headphone jack up-top with a secondary noise cancellation mic.

Redmi Go also has a pretty compact design, thanks to the small 5-inch HD display on the front. Xiaomi neither opted for a trendy 18:9 screen nor a notched one, probably to keep costs low. Also, someone purchasing their first smartphone (coming from a feature phone) wouldn’t really care for a taller display. Most such users should be happy with what they get for their money. 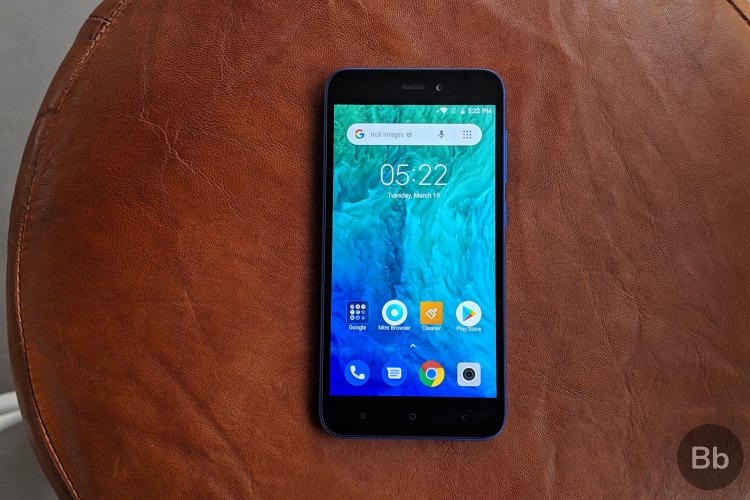 The HD display (1280 x 720 pixels) on the Redmi Go is decent for the price and features huge bezels on the top and bottom, with capacitive buttons on the bottom. The screen ordinarily gets bright, but appeared dim under the direct sunlight outdoors. We’ll thoroughly test the same over the coming days.

Redmi Go is powered by a quad-core Snapdragon 425 SoC, clocked at 1.4GHz and is coupled with 1GB RAM and 8GB internal storage. Xiaomi has launched only the lower-end variant of the smartphone in India, leaving out the 16GB variant. I have not toyed around with the Redmi Go enough to pass a final judgment but the 1GB RAM is possibly going to prove to be a bottleneck in the long run, especially if you load up heavier apps on it. 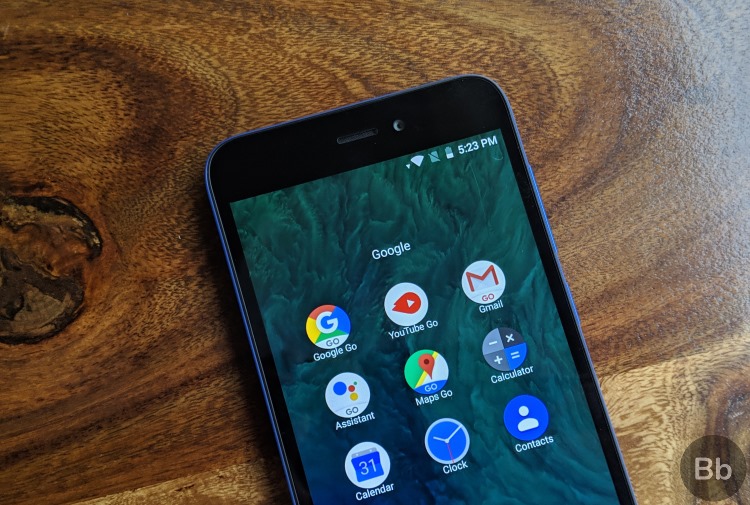 This smartphone as suggested by the name is made to handle light tasks and I’ve already seen frame drops and stutters across the UI. It is more evident when you switch between apps or type quickly. We will test out the same, along with the gaming performance of the Redmi Go, and deliver our final and complete verdict in the complete review.

Redmi Go, if you’re unaware, comes with Android 8.1 Oreo (Go Edition) out-of-the-box. This is a special version of your favorite mobile OS, designed to run smoothly on entry-level smartphones with 1GB RAM and less.

Note: It’s unfortunate to see Redmi Go running Android 8.1 Oreo. I find no reason why Xiaomi didn’t go with Android Pie when it’s been out for more than 6 months and there already are phones running the same out there. 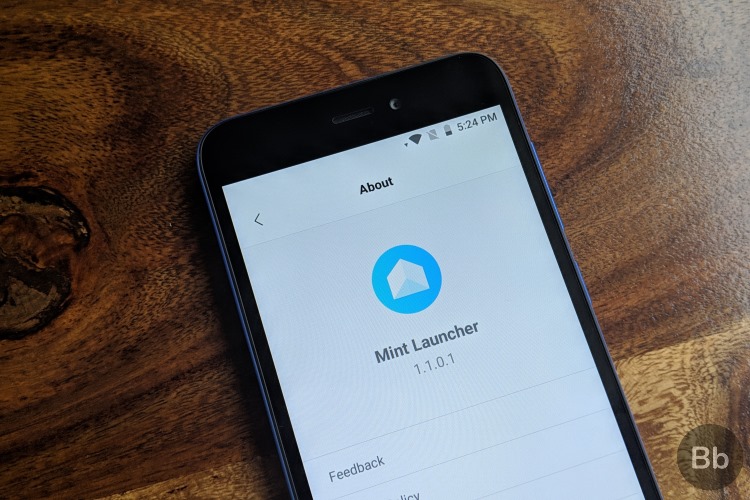 Xiaomi has slapped its own Mint Launcher on the stock OS and the device comes pre-loaded with a number of Go apps including Google Go, YouTube Go, Gmail Go, Assistant Go, and more. There’s not much bloatware here, except for the FB Lite and Amazon app, and you certainly shouldn’t expect ads in this clean stock experience.

We got a 86MB performance update within minutes of powering up the device, so timely software updates can be expected from the Redmi Go. 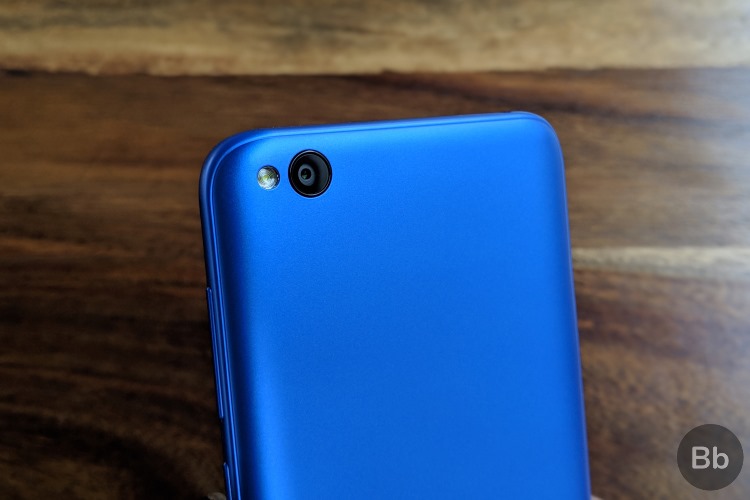 With a sub-Rs 5000 smartphone from Xiaomi, all we can expect are two cameras. Redmi Go delivers the same with an 8MP (f/2.0) rear camera, with a single LED flash, and 5MP (f/2.2) selfie camera on board. Xiaomi has bundled a myriad of camera features with the smartphone, including real-time filters, Auto HDR, the ability to adjust the scene type or manual controls.

We clicked a few samples (daylight, low-light, and selfies) we captured with the Redmi Go and the cameras look to be pretty average for now. It performs well in daylight and pictures look grainy in artificial light. We’ll reserve our final judgment for the full review, until then here are a few pictures we captured with the device:

Redmi Go comes with all the connectivity features you expect from a smartphone these days. It has 2 separate SIM trays, with one of them accepting just a single nano-SIM card, while the other one supports a nano-SIM card, as well as microSD card (up to 128GB storage). 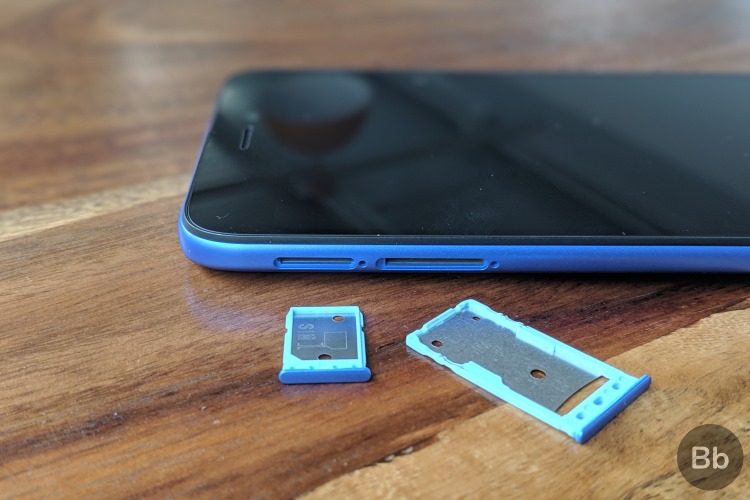 While you can simultaneously use 2 SIM cards on this smartphone, you won’t be able to use VoLTE on both. No dual VoLTE support on board here, which would have been a huge plus.

The dedicated microSD card slot on Redmi Go is a boon for users, especially because of the low internal storage.

The device supports Wi-Fi 802.11 b/g/n, which means you’ll only be able to connect to 2.4GHz networks and not high-speed 5GHz ones. It includes Bluetooth 4.1, GPS, AGPS, GLONASS, and Beidou support as well.

Xiaomi has packed the Redmi Go with a modest 3,000Ah battery pack that should be more than enough to get you through the day. I believe average use (calling, WhatsApp, and content consumption on YouTube on an HD display) will give you a great usage time, but we’ll have to spend more time with the device to confirm the same.

Redmi Go is Xiaomi’s cheapest Android smartphone to date and it’s a huge deal because the Chinese giant will now attract feature phone users who are looking for a modern and feature-packed phone but without burning a hole in their pocket. Is it underwhelming, as some readers say on social media, or not, we will find out in our complete in-depth review.

Until then, what are your views on the Xiaomi’s first Android Go smartphone? Will you be getting Redmi Go when it goes on sale within three days? Do let us know in the comments below.