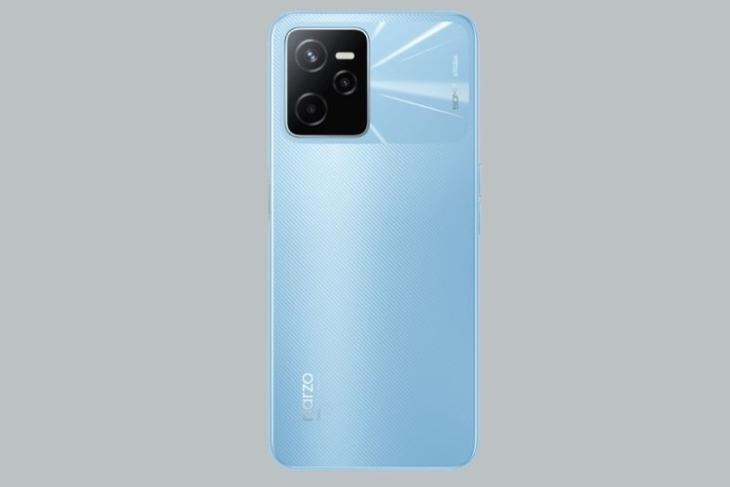 Realme has refreshed its Narzo 50 series with the introduction of the Narzo 50A Prime budget-centric smartphone. It has been launched in Indonesia and joins the existing Narzo 50, Narzo 50A, and the Narzo 50i. Here’s a look at what the latest Narzo 50A Prime has to offer.

Realme Narzo 50A Prime is a budget phone but pays attention to the design, which is different from its other siblings. It has flat edges and a Realme GT-like rear camera hump with big camera housings, placed on a designer upper portion. The rest of the back panel is also textured.

The front has a 6.6-inch Full HD+ LCD display with a waterdrop notch, a 90.7% screen-to-body ratio, and support for a peak brightness of 600 nits. It has the standard 60Hz refresh rate too.

The Narzo 50A Prime is powered by a Unisoc T612 chipset, coupled with 4GB of RAM. There are two storage configurations to choose from, 64GB and 128GB, both being expandable by up to 1TB via a memory card.

The camera department features three cameras at the back, including a 50MP main snapper, a macro camera, and a B&W lens. There is an 8MP front camera for selfies and video calling. Features like the Portrait mode, some AI bits, and more are also available.

The Narzo 50A Prime gets its fuel from a 5,000mAh battery, which supports 18W fast charging. It runs Realme UI R edition based on Android 11. Additionally, it comes with a side-mounted fingerprint scanner unlike the back-mounted one on the Narzo 50A, 3-card slots, a 3.5mm audio jack, Wi-Fi 802.11 ac, Bluetooth version 5.0, USB Type-C port, and more.