QR codes are already used on almost everything. From billboards to brochures, the possibilities are endless. However, an up and coming application for this informational giant is use on resumes. The use is still very new, but the novelty can work with you, helping you to stand out from the crowd. Having a QR code on your resume comes with a lot of benefits, from aesthetics to clarity, and is sure to make your resume noticeable and unique. 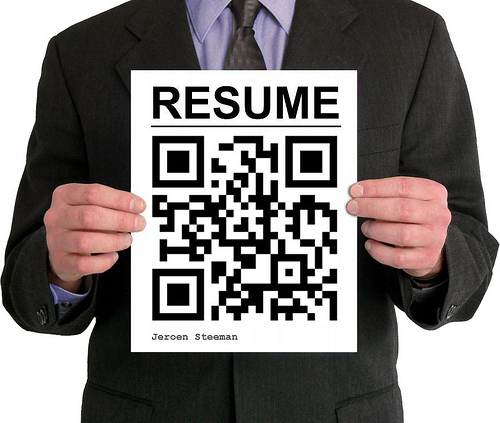 There are close to 50,000 John Smiths in the United States as of 2010. Help hiring managers find you by providing useful links, clarifying your identity and showcasing your achievements. Most hiring managers run web searches on applicants as a preliminary background check – providing links to your career accomplishments, LinkedIn profile and other important information does the work for them, and helps avoid a possibly tragic case of mistaken identity.

Including a QR code also provides a key piece of information that pretty much all hiring managers today are looking for: Proof that you’re tech-savvy enough to keep up with the times. It doesn’t matter if you got the code from state of the art software installed on your home business computer or from your favorite quick response code generator, you’ve already shown you’re perfectly at home in today’s digital world. For older applicants, this can be the key to being selected over younger, seemingly more “modern” prospects.

The original purpose of the QR code was in tracking auto parts as they changed hands through Japan’s Toyota factories. Using the right tools, you can turn your resume QR into an easy way to see whether your resume has been viewed in detail. Certain administrative tools allow you to receive email alerts or text messages monitoring the number of scans performed on your personal QR code and where those scans came from on the map. It’s a little more complex, but who doesn’t want to be a fly on the wall in the hiring manager’s office?

The Dos and Don’ts of Resume QR

Since using QR codes on a resume is fairly new, there aren’t a lot of hard rules for their implementation. However, there are a few guidelines to keep in mind before you start slapping the code onto every white linen printout you make.

You could spend hours researching the pros and cons of using a QR on your resume, so at the end of the day it’s really up to you and your prospective employer. Be conscientious, but don’t be afraid to show off your digital knowhow.