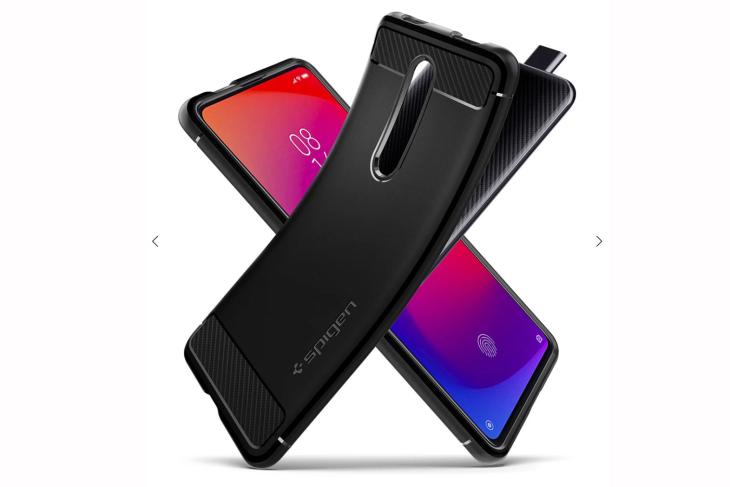 For the longest time, we’ve been waiting for Poco to give out any information at all about a successor to its hugely popular budget flagship — Poco F1, and while the company has so far not really given anything away, if you’ve been quietly holding out hope for a new Poco branded smartphone, you’ll be happy to know that it definitely looks like Poco is working on something for its consumers.

Popular case maker Spigen has listed the Poco F2 case on its website, complete with renders of a phone inside one of its Rugged Armor cases. Right now, it looks as though Spigen is using renders of the Redmi K20 Pro inside one of its Rugged Armor cases as what I think are placeholder images. In fact, if we check the source for the image, it does say “Redmi K20 Pro”, so that does in fact seem to be the case.

Normally, we would be skeptical of a listing which names a different smartphone and shows a different one, but considering this is a listing on Spigen’s official website, it definitely looks like the case maker knows somethings that we probably don’t at this point. That’s further corroborated by the fact that TechPP’s self-branded “resident gossipmonger”, Tech Auntyji, tweeted yesterday that the Poco F2 does, in fact, exist and will be coming out to compete against a company that’s “daring to leap” — a definite hint at the upcoming Realme X2 Pro launch.

Darlings, the Poco F2 exists. And will be timed to rain on the party of a rival flagship killer. I really cannot say more.

Keeping that in mind, and the timing of the case listing popping up on Spigen’s website, it does seem possible that Xiaomi is indeed working on a new Poco smartphone. Should the phone come out to compete against the Realme X2 Pro which is set to launch on November 20, it will be exciting to see these phones fight it out for supremacy. Poco F2 vs Realme X2 Pro vs Redmi K20 Pro? Now that’s a fight I want to see. Here’s hoping.