The uber-popular budget flagship, the Poco F1 from Xiaomi receives updates on a regular basis, but there’s no fixed schedule for the same. The last MIUI 10 Global stable release went live back in mid-June with features, including a customizable lock screen clock and dual app functionality fixes.

The Poco F1 is now receiving MIUI v10.3.6.0 which brings the June 2019 Android security patch and a handful of optimizations in tow. Xiaomi now improves on the lock screen pocket mode, which has repeatedly been found to not work properly on Poco F1 forums. While ghost touches and other display-related issues were weeded out with prior updates, the device has now fixed an issue where incoming notifications didn’t always light up the screen. 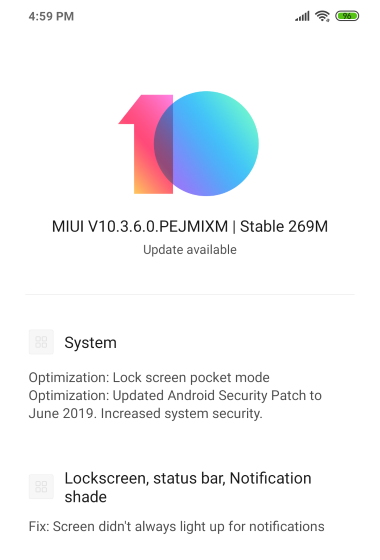 This isn’t a major update, however, it does bring the uber-budget flagship up-to-speed in terms of security. Poco F1 has consistently received updates ever since its launch, making it a smartphone worth picking up even today. And we say this because Xiaomi has today announced a temporary price cut on most variants under the Poco Days sale.

So, would you still be interested in buying the Poco F1 today? Do tell us in the comments below.