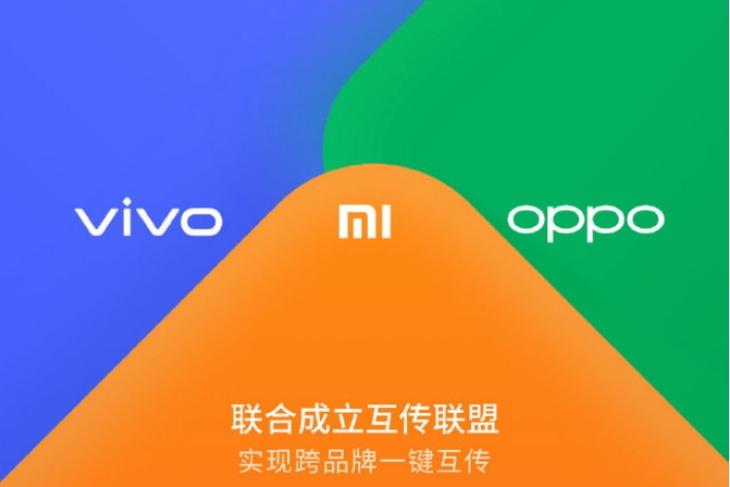 Chinese giants Oppo, Vivo, and Xiaomi may compete for a larger chunk of the pie in the smartphone market, but they’ve now decided to partner up and build a new wireless file transfer protocol for its Android-backed devices. They are looking to rival Apple’s oh-so-popular AirDrop file-sharing feature.

Called the Inter-Transfer Alliance (upon translation), it will see the three aforementioned Chinese phone makers offer a new file transfer technology to its users. This will allow the users to send/ receive different types of files including photos, documents, audio files, zip files, videos, and others over Bluetooth. It will most likely use Wi-Fi on the backend, so it can offer speeds up to 20MB/second – much like AirDrop.

Xiaomi’s official blog post says that the alliance currently has three phone makers, but it looks forward to welcoming other manufacturers who are interested in baking its new file transfer system into their devices. Upon translation from Chinese to English, their official announcement reads as under:

Android doesn’t offer a fast and reliable way to transfer files between devices, thus, the need for a new data transfer protocol is existent. You can use ShareIt or Files Go for all your file-sharing needs but who wants another app on their phone for the same. There’s been sightings of a new “Fast Share” feature on Android Q, but it will likely be limited to some Android devices – thanks to fragmentation. Vivo, Xiaomi, and Oppo can, however, offer their file transfer technology to users via a software update for FunTouchOS, MIUI, and Color OS.

If you’re eager to try out this AirDrop for Android-like service, well, a beta version of the file transfer feature should become available by the end of this month. So, what are your expectations from this feature? Let us know in the comments below.