It has been a couple of months since the launch of Google or LG Nexus 5 and it has become one of the hottest selling smartphone in many countries. Although It is a great deal at $350 but there are many issues faced by the Nexus 5 owners that hint that Nexus 5 is still buggy with some hardware and software issues. In the past we have seen flagship smartphones with bugs like Galaxy S4 lag in daily tasks, overheating problems in many HTC phones etc. The manufacturers solved these bugs with their updates and it would be interesting to see how Google deal with these issues. If you are going to buy Nexus 5 or own one, it is important for you to a look at some of the most common hardware and software bugs in Nexus 5. 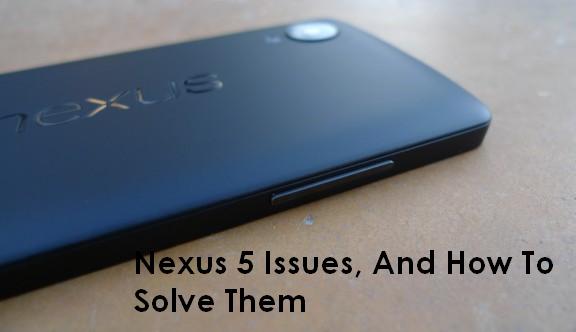 1. Difference in Audio quality through speaker of Nexus 5

The audio quality in some Nexus 5 devices seemed weak and muffled most of the times while playback with some apps. This seems like software issue in most and hardware issue in some of the devices due to use of extra glue to stick the speaker unit.

Enable equalizer in Google Play music, check for the System updates since Google is already working on the fix to this bug. If it is hardware issue, you can ask for replacement unit.

Nexus devices were never known for their camera features and optics, Nexus 5 is no exception in this case. Users have complained about out of focus photos, slow shutter speed and focus. These are software problems with the stock camera app and definitely Google will fix them in future updates, so we will have to wait till Google clears this mess.

You can try third-party apps from Google play store if you want more features and snappy speed while taking shots.

Some users are experiencing connection drop moving away by short distance from router. Some users even report that Nexus 5 doesn’t connect to their network.

There are some solutions like select manual 2.4 GHz or 5 GHz frequency band from wi-fi menu and not setting it on auto mode. Uncheck avoid poor connections option. Toggle the airplane mode and Wi-Fi mode, then reboot the phone.

Some Nexus 5 users have reported dead pixels on Nexus 5 display due to dust or manufacturing defect while making display.

Download the dead pixel test from Google play and test. You can ask for replacement unit from Google or retailer.

Some Nexus 5 users reported abnormal battery drain problem, if you experience the same problem try looking for app than drains the most battery, If problem continues you can ask for replacement unit.

If you find the Nexus 5 power button rattling with weird movement when you shake the phone, then the power button on nexus 5 might be loose.

You can solve this problem by buying case or cover to prevent movement of the button. You can ask for replacement from retailer or Google Play.

If the nexus 5 vibrates with some unusual pattern from weak to loud and weak again, the motor might be faulty and you should immediately ask Google or retailer to send replacement unit.

How To Extend Battery Life in Nexus 5